If you’ve worked in a university, you’ll be familiar with the tortuous machinations that inevitably erupt during internal elections. Examples are not as common as they once were (a specific instance being the installation of Deans, who are usually now appointed rather than elected), but they still exist, especially in more traditional institutions. 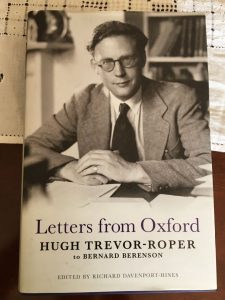 It’s with this in mind that I’ve just come across a most wondrous piece of writing on the thorny process of university elections. It’s in a book of letters by Hugh Trevor-Roper, the Oxford historian, to Bernard Berenson, a famous art critic. I’ve previously written a couple of posts about Trevor-Roper (‘Of Oxford, books and a theory of stupidity‘ and ‘The joy of a new book‘), and love his writing. The letter was written on July 6,1951 from Christ Church to Berenson at I Tatti (his marvellous villa near Florence – now the Harvard Center for Italian Renaissance Studies), and here is the relevant section (pp. 67-71):

It only remains to add that Sir Hubert Henderson, overcome by the excitement of election, has retired to hospital with a heart attack; so a spare hatchment has been commissioned and discreet preparations are already, but I hope wrongly, being made for a resumption of the struggle.

2 thoughts on “University elections – a story of Light, Darkness and Jellies”