For some years the two main annual reports I’ve written about are the Horizon Report and Innovating Pedagogy. Each has earned a worthy place in our toolkit of useful ideas, and each has its own perspective: the latter obviously focuses on pedagogy (“exploring new forms of teaching, learning and assessment”) while Horizon introduces us to new and emerging technologies. 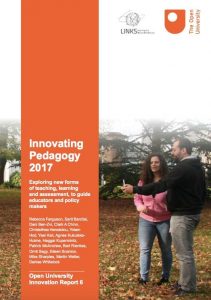 Innovating Pedagogy 2017 (yes I know it’s 2018, but only just; I’ve slowed down in my senior years) is the sixth in the series, and once again provides ten short outlines of pedagogies which the team (this time the UKOU group has allied with the Israeli Center of Research Excellence) perceive as worthy of our attention. Taken overall, the report provides a variety of tools that enable learners to be empowered and proficient. Under the empowerment banner, examples include ‘Spaced Learning’, ‘Open Textbooks’, ‘Learners making science’ and ‘Big-data inquiry’.

An example of an approach to help learners be more proficient is Epistemic Education (found under the eye-catching heading of ‘Navigating post-truth societies’). As we well know,

… we make daily decisions about where to get information, which sources to trust, and how to respond to conflicting information. These decisions reflect our assumptions about which kinds of knowledge are worth having, who is trustworthy, how to evaluate information, and more. The ways in which we think about such issues are called ‘epistemic cognition’.

This leads to the notion of epistemic education, which focuses on

… instructional efforts to promote learners’ epistemic growth. These efforts vary greatly, but they often take a two-pronged approach:
1. They seek to develop learners’ awareness that knowledge is complex, diverse, developing, constructed within particular perspectives, and informed by particular sources of evidence.
2. They also aim to foster an appreciation that alternative explanations or arguments are not equally right or valid, that some ways of knowing are better than others, and that knowledge can be reasonably critiqued and evaluated.

This is (like most of the innovations) not entirely new. Elements of this idea can be found, for example, in our work  to educate learners in the assessment of the quality of information gleaned from the internet. About 15 years ago I wrote a short online course for the Open University of Hong Kong titled Mining Information in the Internet Age. It included the Quality of Information Evaluation Tool (QuIET) which equipped learners with eight specific criteria by which to ascertain the ‘truthfulness’ of online claims.

Also of interest in this report are the examples which are natural progressions of earlier identified innovations. An obvious example is ‘Open textbooks’, an extension of OER (I suspect it’s Martin Weller’s chapter), along with ‘Student-led analytics’, the newly emerging extension of learning analytics.

So, jump on in and check the chapters which appeal to you. If you’re new to ‘Spaced learning’ (as I was), start at the first innovation. While there, check the bold claim that “90 minutes of spaced learning could have the same outcomes as months of study”. Really?!