If you want to read a couple of revealing books about the world wars of the 20th century, then my choices would be Robert Graves’ Good-Bye To All That and Primo Levi’s If This Is a Man. Both are autobiographies, Graves’ concerning his role as an English junior officer in the First World War and Levi’s a harrowing tale of his experience as a prisoner of war in Auschwitz in World War 2.

These deeply moving books are opposites in style of exposition: Graves is admittedly subjective and quite impassioned at times, while Levi adopts an objective approach, believing that it would ensure the credibility of his work. It was some years ago that I first came across the book, a riveting and confronting account of the atrocities endured by Levi and his fellow prisoners, nearly all of whom perished. Some time later I read his follow-up book, The Truce, tracing his long and tortuous journey back to his home town of Turin. I was saddened to learn that he had apparently taken his own life in 1987, and started gathering more of his literary works, culminating in the beautiful boxed set, The Complete Works of Primo Levi, which was published in 2015*. 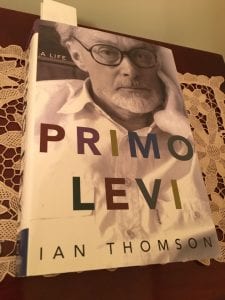 Then a couple of months ago I chanced upon Ian Thomson’s biography, Primo Levi, A Life. It’s in hardback, in excellent condition, and cost the princely sum of A$4.25 in an op shop. The superb quality of this book is indicated by Thomson’s award of the Royal Society of Literature W.H.Heinemann Prize. And the accolades from respected critics are revealing:

“One of the best literary biographies of the year… superb… Levi, I think, would have appreciated it. Shrewdly, Ian Thomson has provided what any lover of Levi needs close by: not a critical interpretation or reinterpretation, but a reader’s companion… Thomson writes with an exemplary mastery of detail and rare narrative verve… his biography illuminates what Levi wrote by its scholarship, piecing together the people and influences with measured perception” (Observer)

“How does one write the life of such a man? Mr Thomson has done so with great respect… Brief, fact-packed sketches… illuminate the worlds that Levi inhabited… Mr Thomson never pretends, as many biographers do, to know his subject better than he could. At times his discretion seems astounding, even admirable… Mr Thomson’s reserve enables him to deal frankly with Levi’s emotional struggles and personal shortcomings, while avoiding the modern biographer’s overpowering temptations: to treat his main character as a moral inferior or a patient to be diagnosed” (New York Times) 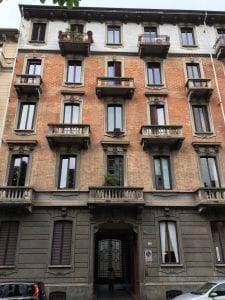 The principal accolade I can give this biography is that I come away from it feeling that I understand Primo Levi better and more fully. I have also come to an increased understanding of Italian history and culture. On top of that, it is well-written, the product of an unobtrusive style and meticulous research. The biography apparently took a decade to write, not surprising given the number of people interviewed (more than 300 in person, about half that by correspondence) who knew Primo Levi well. It shows, in what might have been a dreary chronicle of a life, but instead is, as they say, a riveting read. All this about a man who lived practically his entire life in a flat on the third floor of Corso Re Umberto 75, Turin, caring for his mother and keeping the peace with his patiently enduring wife.

So this mild-mannered and diminutive Italian, who lived practically all his life in Turin and worked as an industrial chemist, became an important and inspirational world figure. How, because he endured and survived unimaginable deprivation and torment in Auschwitz, surviving and going on to write the most penetrating and influential account of his travails, followed by decades of struggle and numerous successes as a supremely talented author. It is this profound life that Ian Thomson has revealed to us in intimate and heartwarming detail.

By interviewing numerous people who knew Primo Levi, Thomson has managed to build and write an account which is constantly engaging, as we learn of Levi’s life in great detail. All the while, the account is neatly interwoven with the history and culture of Italy, revealing information of which I at least was ignorant. For example, Italian fascism was significantly different from German fascism, so much so that Levi was even a member in his youth, just like many of his Jewish contemporaries. And just as Italian politics is complex today, it was no different back in the 1930s and 40s. We also learn of the progress and problems of the Jewish community in Italy, from centuries ago until recently. And all this from the Levi family who were so strongly integrated with the the Italian community that their cleaner didn’t even realise that they were Jewish!

Another example: Thomson interviewed Luisa Ricco, daughter of his boss at the chemical factory in Turin. Luisa had accompanied her father and Levi on a trip to Germany on business in 1954. At an opulent dinner party, one of the German Bayer staff asked Levi about the tattoo on his forearm (close inspection reveals the number 174517). The glacially calm response was “It’s a memento of Auschwitz.” And of course there is much, much more; the problems Levi endured trying to get his work published, his changing attitudes and ultimate frustration with the emerging state of Israel, the long road to recognition, his battle to ensure the legacy of his experience, and his decades of difficulty in caring fo his mother while trying to be a supportive husband and father.

So, whether or not you are familiar with Primo Levi, read this exemplary biography. If you haven’t read any of his work, it will undoubtably inspire you to start, and if you have read him, it will expand and round out your knowledge of this remarkable man, an author who produced “the essential works of humankind”. 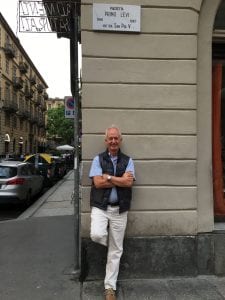 Piazzetta Primo Levi on the corner of Via S. Pio V and Via Sant’ Anselmo

* Since starting this post, I’ve been perusing the collected works (still have a lot of reading to do!) and examined the map of Turin on pp. xxxiv and xxxv. This was partly as I’d visited Turin recently, and while there went to his home in Corso Re Umberto. Coincidentally, the hotel where we stayed was in the same street containing the school and synagogue with which he is acquainted. I mention this because I was surprised to find that at least two of the specific locations marked on the map are wrong! One is the Piazzetta Primo Levi, marked on the map about two blocks from its real location next to the school. (Sadly, there is an armoured vehicle with 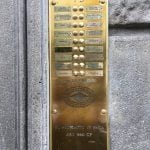 Click to see that it’s the third, not fourth, floor!

two soldiers on apparently permanent guard duty outside the school and synagogue.) Another is the Institute of Chemistry where Levi attended university. In addition, the map states that Levi lived on the fourth floor of the apartment building, when it was in fact the third floor (though this may be in deference to the US market, where floor numbers start at 1 for the ground floor).

Now these are of course minor points, but nevertheless surprising in such a major work.