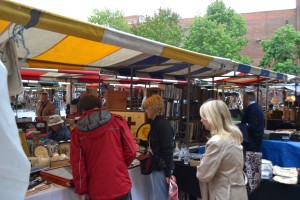 Every Thursday, near the centre of Oxford, sees the Gloucester Green ‘Antique and Craft Market’. Two immediate caveats: Gloucester Green is now a car park rather than the picturesque grass field you might imagine (though there is the odd tree, as you can see); and it’s more of a flea market than its grand title suggests. Nevertheless it’s great fun, and Marilyn and I (at her insistence) have visited on more than one occasion. And that’s where my meandering tale begins …

Browsing the books of a particular stall, I spied Adam Sisman’s recent biography of Hugh Trevor-Roper. It struck a chord, as I had recently been discussing him with a friend who has a particular penchant for WWII history. A talented academic with a distinguished war record (code-breaking and grilling Nazis), Trevor-Roper later became a life peer with the title of Baron Dacre of Glanton (I kid you not) and was even more (in)famous in the 1980s for his initial erroneous conclusion that the Hitler Diaries were genuine.

First, the biography itself is in as-new condition: hard cover, author-signed copy for a mere five pounds. I tucked it under my arm, and after determining that there was nothing else there to tempt me, went to hand over the dosh. The stall-holder asked if I might be interested in the book that had been next to it, to which I replied no, I’m not after anything on Tolstoy. Not that one, the one on the other side, he retorted. But it’s in Italian, I exclaimed. Yes, but just look more closely, he politely suggested, especially inside the front cover. 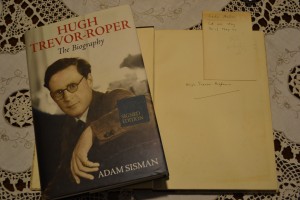 Opening the second book, there was the hand-written name ‘Hugh Trevor-Roper’. Yes, this was his personal possession, a book from his considerable academic library, some of which was sold at auction after his death in 2003. Not only that, there was a small card inside the front cover. It comprised a personal request from Trevor-Roper to none other than Lady Astor (probably Lady Irene Astor, daughter of Field-Marshall Douglas Haig, to whom he was related by marriage):

‘Lady Astor Cd we stay Fri 17 May’, with the response underneath:

That sold it for me, though I did engage in minor haggling before duly handing over the agreed ten pounds for both books.

Once back ‘home’ (we were renting in nearby Summertown), I started further investigation of my additional prize. The book in question was/is a ‘one-off’ – a collection of journal articles from the 1950s which had been rather expertly bound. On the spine were three words: ‘Cipolla’; ‘Romano’; and in smaller typeface, ‘Saggi’ (Italian for essays). Cipolla and Romano were the authors of the articles contained in the bound collection, itself evidence of Trevor-Roper’s meticulous approach to maintaining his scholarly resources. 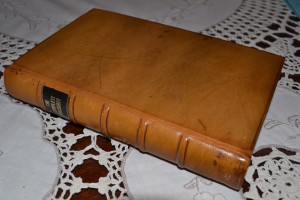 It also reminded me that there was a time when universities had venerable and highly skilled bookbinders, even in Tasmania where I initially studied – one of my proudest possessions is a mathematics text from the 1700s, meticulously restored with a soft calfskin cover (for the princely sum of $25) by the chief bookbinder of the University of Tasmania, shortly before he retired. Trevor-Roper’s bound collection additionally contains evidence of its origins, including pencilled notes concerning the binding (e.g. ‘leave cover’) and brief notes from the authors to Trevor-Roper (e.g. Romano writes ‘Bon travail!’ with a flourishing signature, and adds ‘Napoli, 4.4.1955’).

So who were the two authors? An online search reveals that both were economic historians, a discipline in which Trevor-Roper became somewhat controversially involved in the early 1950s. Ruggiero Romano (b. 1923) spent most of his academic life at the Sorbonne and the prestigious École pratique des Hautes Etudes (hence his comments in French) and died in 2002.

Carlo Cipolla (1922 – 2000) also spent time at the Sorbonne, but was more widely travelled, undertaking further study at the London School of Economics and working in the US (as a Fulbright Fellow and later as a visiting professor at the University of California, Berkeley). 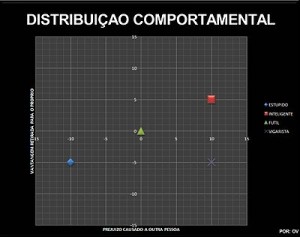 Reading his Wikipedia entry, I was particularly intrigued by his somewhat off-topic offering of a ‘theory of stupidity’, a wondrously tongue-in-cheek article he presented in 1988 under the playful title of Allegro ma non troppo (‘Happy but not by too much’ or, as in music, ‘Quickly, but not too quick’). As well as five fundamental principles (or laws) of stupid people (e.g. A stupid person is the most dangerous type of person.), Cipolla introduced a fascinating graph purportedly demonstrating four fundamental types of persons: the intelligent (top right); the helpless/naive (top left); the bandits/pillagers (bottom right); and the stupid (bottom left).

To understand the graph, we need to first appreciate Cipolla’s third (‘golden’) law of stupidity: A stupid person is a person who causes losses to another person or to a group of persons while himself deriving no gain and even possibly incurring losses. Building on this, construct the axes with the x-axis showing ‘Benefits and losses that an individual causes to him or herself’ and the y-axis ‘Benefits and losses that an individual causes to others’. Plotting this produces the four types of persons listed above.

If this tickles your fancy as much as it tickles mine (as the bishop said to the barmaid), then click on the title above to read Cipolla’s engaging and charmingly illustrated article. It’s a great piece, and includes his salutory ‘finding’ that there is the same proportion of stupid persons among Nobel laureates as there are among blue-collar workers.

And there’s more, much more, but I’d better cease this meandering and get on with reading the biography.

Afterword: At least part of my motivation for writing this post was to defend and promote the value of traditional books with respect to the ever-enveloping tide of e-books. Had I simply bought the Hugh Trevor-Roper biography as an e-book, I would not have engaged in the fascinating (for me, anyway) journey outlined above; I would not now have an author-signed copy; I would not have a bespoke book from Trevor-Roper’s personal library; and I would not know about the contributions of Romero and Cipolla.

One thought on “Of Oxford, books and a theory of stupidity”