There it was, on the doorstep. A parcel, obviously a book. I knew it was coming, but it was still a nice surprise to see it there. And as with most pleasant things in life, there was a story behind its arrival.

Just over two years ago, I wrote a post titled ‘Of Oxford, books and a theory of stupidity‘. The focus was my experience in buying a couple of books associated with the Oxbridge historian Hugh Trevor-Roper (T-R) at a market in Oxford. Then, out of the blue, a few months ago I received a message from a reader who was interested in purchasing one of the books, in this case a bound series of articles from T-R’s personal library.

At first I dismissed the offer, as I wasn’t interested in parting with my prized possession. But on reflection I reasoned that since when I depart this mortal coil the book would likely be discarded, it might be better if it went to a serious collector. The ensuing email discussion clearly established that the reader, an historian, was genuinely interested in putting together a T-R collection.

The issue then became what might I want for the item? As it was so hard to put a dollar value on it, I suggested that he might be interested in sending me a new book on T-R that has recently appeared in exchange. To this suggestion he readily agreed, and so I duly posted off my T-R book (including the card from Lady Astor refusing his request to stay!). 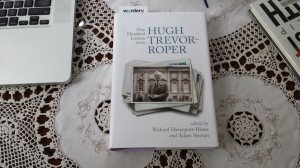 What book did I want? Well, it just so happened that a new book on T-R has recently been published: One Hundred Letters from Hugh Trevor-Roper, edited by Richard Davenport-Hines and Adam Sisman (yes, the same Adam Sisman who wrote the wonderful 2010 T-R biography). Published by Oxford University Press, the book is a wondrous object: beautifully bound to an appropriately high standard and on high quality paper. The font is perfect for the task (could be Caslon Old Face, I’m not sure) and it was printed in Italy. So as a physical object the book is a joy.*

Our esteemed editors have done just what might be expected for a book of this calibre. They have been meticulously detailed and painstaking in assembling and editing the letters. Many of us have edited books in our time, and cringe a little as we recall throwing a collection of conference papers together, adding an introduction and sending it off for publishing and the remainders bin. Not so Davenport-Hines and Sisman, who add to the joy that engulfs the reader with their uniformly informative introduction, backgrounding of each letter and extensive footnotes (found on practically every page!).

An example of the benefits of reading the footnotes: On page 18 we learn that Maurice Bowra said of his lectures,

“My lectures are attended by large crowds, who have a reverential look, as if they were in church. The girls knit, the boys look at the girls. At intervals, elderly ladies come in, stay for ten minutes, and then go out. Small boys come from the street, playing hide-and-seek.”

The footnotes also provide additional details of T-R’s writing and reviewing that are simply delightful. Witness this from page 172, dealing with a book review T-R provided for the Sunday Times:

“… a drivelling farrago of nonsense’ and as an act of character assassination by Hochbuch abetted by Kenneth Tynan and David Irving (b. 1938). Tynan he dismissed as ‘the very type of “Trendy-lefty”, the avant garde nihilist conforming rigorously to pattern’, and Hochbuch as ‘one of those pontifical teutonic froth-blowers whose addiction to pretentious prolixity is all too familiar … Let us leave him wringing his hands on a Swiss mountain, far above mere facts, his head in a swirling Alpine cloud of mystic piffle.'” 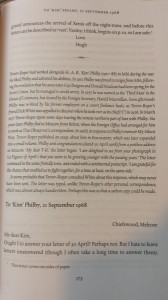 Here’s one to no less than the infamous Kim Philby, with whom T-R worked at MI6 during the war.

As for the letters themselves, it is readily acknowledged that T-R was one of the great letter-writers of the 20th century. And these have been chosen for the quality of the writing rather than the importance of the addressee.

One important receiver of his letters was of course his wife Xandra, with whom he corresponded frequently during periods when they were apart, both before and after marriage. Here is his response to her (p. 44), early in their relationship, when she must have expressed reservations about the quality of her writing:

“Now, your letters: need I really say it? I love receiving them; they make it perfectly possible for me to live alone here, in this sullen climate, surrounded by deserted rooms and halls, and quadrangles full of apparently inhuman tourists, taking my identical cold meals in solitude and silence while the echoes of their brazen, inappropriate, transatlantic misobservations drift in through my open window. I have tried to work here alone in August before; and always before I have had to give up through utter dispiritedness; but this time I feel I can go happily on and only wish it could go on longer; and this difference is entirely due to the sustaining hope and confidence that next day, at breakfast, I shall find a flat blue envelope with a Melrose postmark and a spidery inscription! I can assure that my sensitive skin has not yet shivered at an infelicitous adjective, that I never notice your punctuation (which is surely a sign that it is correct), and that I would rather have a mixed metaphor (as in your last letter) than no metaphor at all! If there are any platitudes, I will shudder and tell you; but so far – in some 769 pages – there have been none! So please don’t write to me as if submitting exercises to a critical pedagogue; write as you do, and as fully, and as often, and I am delighted!”

As I typed this I wondered should I rather have quoted the section in this letter where he explains why he likes (some) undergraduates so much – the letters induce such fascination (in this reader, anyway).

Now I’ve had the book for only a short time, and am taking my time to browse and digest its wonders. So I have no idea as to which might be the ‘best’ letter, nor the ‘best’ quote. So at a loss to decide what else to quote, I opened a page at random and found this, from a letter to Alasdair Palmer on page 307:

“And then, you survived Cambridge! I respect you for that! You must have great spiritual resources to have done so, generated perhaps at Marlborough, perhaps in Highgate Cemetery, perhaps elsewhere; it is not for me to speculate. Man is a mystery. Psychology is not a science either – and psychoanalysis is an imposture.

One of the shocks which I experienced on my arrival in Cambridge was when I was approached by a colleague – a university reader – and invited to join ‘the Peterhouse Book Club’. The members, as I afterwards learned (for of course I didn’t join) vote to buy such and such a book, and then it is handed round from Fellow to Fellow to read – I thought of the Graiae, those three old women of Greek mythology who had but one eye and one tooth between them and handed it round for successive use. Last term I discovered that the latest book they had bought for such circulation was Sarah Keay’s book on the process which led to her illegitimate child. Such is the intellectual life of the oldest college in Cambridge. It is like a Women’s Institute at Ely.”

Note that there are three footnotes to these two paragraphs (e.g. one explaining the reference to Highgate Cemetery).

Enough for now. There is so much more (e.g. T-R’s musings on the nature of treason in the letter to Philby) and I’ve so much more yet to absorb from this joy of a book.

* I note this as I recently bought another book from the other end of the physical object spectrum. It’s a ‘$5 special’ published in soft copy by Vintage (Kingsley Amis’ Booker Prize winning The Old Devils). The paper is cheap and yellowing, the type looks as though it was done on a broken down photocopier (making it hard to read at night!) and the spine is falling to pieces after one read.