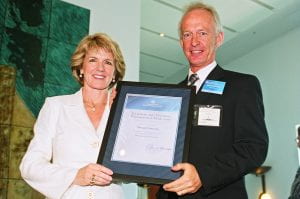 A fine moment – but not my finest!

I worked for Monash University for eight years, in two stretches – from 1998 to 2001 and from 2005 to 2008. My first appointment (the more pleasurable) was as Associate Professor of Flexible Learning in the Centre for Higher Education Development (CHED), and the second stint involved a progression in a number of steps, culminating in my role as Professor and Director of the Centre for the Advancement of Learning and Teaching. I resigned/retired hurt in 2008.

I’d like to think that there were some significant achievements along the way, especially in CHED, where as a team we designed and developed a teaching course for staff, the Graduate Certificate in Higher Education, offered flexibly across all of Monash’s six campuses in Australia, Malaysia and South Africa. The bulk of the course was offered online via software Len Webster and I designed (InterLearn), with the aid of a talented computer programmer and a terrific graphic designer.

I could go on a little … but won’t. The tale of my major contribution to Monash concerns quality assurance, not something I’m especially well known for. As ably explained by Wikipedia, the “Australian Universities Quality Agency (AUQA) was established in 2000, and was the government body responsible for providing audit of higher education institutions in Australia.” Every university was to be audited, and the feeling was that Monash would be a prime target – it was the biggest, and was not known as being a particularly tight ship, being thought of more as a loose confederation of fiefdoms, or faculties. So the other universities were relishing the prospect of seeing Monash brought down a peg or three by AUQA.

Wisely, the Vice Chancellor took the challenge seriously, and sensibly appointed my boss Graham Webb to the task of preparing Monash for its audit, by making him Pro-Vice Chancellor and head of the Centre for Higher Education Quality. Luckily, Monash wasn’t in the first group to be audited, giving it time to get its house in order. And this it did superbly under Graham’s leadership. A quality framework was developed, and groups set up in each campus and faculty to ensure that everyone was on board with the new quality regime. Among Graham’s smartest moves was the appointment of one of the Directors of AUQA, Robyn Harris, to CHEQ – her knowledge and skills were indispensable in preparing for the intensive and extensive audit process.

I had very little to do with it, and can claim no personal credit, except …

The preparation of Monash’s AUQA report was the major contribution to the audit process. The writing and development of the massive three-volume report took many months, with much discussion and many drafts. Checking and proof-reading was extensive, passing through dozens of hands before final copy was ready and printed, in all its glory.

Early one morning in March 2006 I wandered into Robyn’s office for a quick hello before we got on with our day’s tasks (at that stage my office was in the main administration building on Clayton Campus). Final copies of the report had just been delivered, and the AUQA versions were being despatched. I picked up Volume 1 and began a casual flick through it. I would add that by this stage in my career I had spent considerable time editing text in the form of teaching materials, reports, articles, theses, chapters, conference papers, and so on. One small point I’d learned is that headings are often not checked properly.

Anyway, in the first section I came across a page headed ‘Abreviations’. Feeling somewhat awkward, I nevertheless pointed the error out to Robyn, who was mortified but decided to let it go. As I was about to close it, I looked at the first page, which was the Vice-Chancellor’s statement. It was headed ‘Foreward’ – the very first word on the first page of the report was misspelled! By this stage I felt so awkward that I couldn’t tell Robyn (especially as one of her staff was also in her office), so left and went back to my office in order to ring and inform her more privately. She didn’t answer, so I sent her a quick email pointing out the dreadful error.

This time there was no question but to recall the AUQA copies and have the erroneous page(s) corrected. Luckily the folders were on a loose leaf format, so that it was easily done without a complete reprint. ‘Foreward’ was changed to ‘Foreword’ – my greatest contribution was complete, simply by changing ‘a’ to ‘o’.

In its 2006 Annual Report, Monash was able to state that:

The three-volume Monash Portfolio self-review was completed and submitted to AUQA in May, supported by 100 items of existing documentation. A further 83 documents were supplied at the audit panel’s request, along with written answers to 62 questions of clarification. The AUQA audit involved a total of 13 audit visit days in six locations across three continents. Visit schedules involved meetings with approximately 750 staff, students and external stakeholders of the University. AUQA released its audit report in December, which was very positive and recognised that Monash is ‘well under way’ in becoming one of the best universities in the world because of its research-intensive, international focus.