Students and teachers around the world have been engaged in various forms of online and video-based education this year. Overall it seems to have been reasonably successful, another step in the advances in teaching with technology. 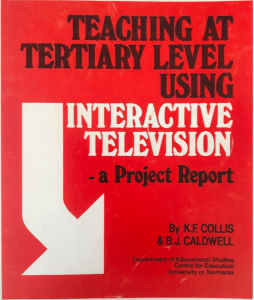 But is it new and innovatory? No, of course not. And, coincidentally, I’ve been cleaning out cupboards, drawers and shelves lately, in preparation for a move, and came across a project report from over three and a half decades ago concerning this mode of education.

In the early 1980s I studied a Master of Education at the University of Tasmania. Enrolment numbers were modest, and students were dispersed around the state, with the main study centres in Hobart and Launceston (200 km apart). Our lecturer, Brian Caldwell (later to become Dean of Education at the University of Melbourne), along with his head of department, Kevin Collis (affectionately known as ‘Quick Kev’), came up with the bright idea of saving all the driving by enabling the two groups to interact via the use of interactive television. 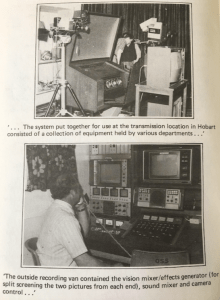 Just a portion of the equipment

At the time, such real-time remote interaction was something of a rarity, even in distance education circles, with the report authors noting in the literature review that “very few institutions or organisations around the word are endeavouring to make use of this technology for educational purposes.” So it was quite innovatory at the time, which isn’t surprising, given the technological hurdles that had to be overcome.

This wasn’t just a case of downloading Zoom and getting on with it: there was no Zoom, Skype or anything like it; there was no internet, as personal computing was relatively primitive; the required equipment was bulky and complex; and the communication links for transmission were expensive (the major budget item). 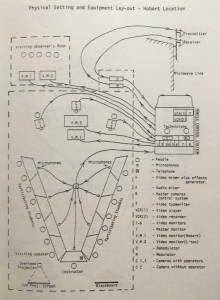 Physical layout for the Hobart group

As I recall, the sessions went pretty well, with just a few technical glitches. There were a dozen or so participants at each location, and I was in the Hobart group. The layout for the sessions was quite formal, given the technical requirements, which by today’s standards were relatively intrusive.

Looking back at the schedule, I’m reminded that it wasn’t just instructor-led sessions: most were student-led, from both locations, and with a variety of Guest Experts contributing. At least one of the guests was from interstate (Deakin University), though I vaguely remember that he was audio only. And the seminars were long, from 6 to 9:30 pm (after school hours). So the challenges were real, from both human and technological perspectives. 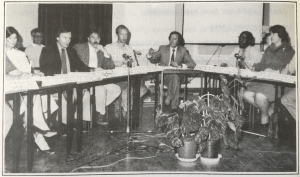 A grainy pic of the Hobart group. Brian is at the apex, I’m on his right, and Julie is second to his left.

Pretty well all of the participants were from the school sector (mostly senior staff with a principal or two) and I was the odd one out, being from the TAFE sector. We got on well, ably facilitated by Brian, who organised some of the non-video sessions around an evening meal. Friendships were formed, which for myself was in the person of Julie Rimes – we later worked as colleagues and published together.

Naturally, the evaluation was extensive, focussing on the four variables of stress level, group climate, student satisfaction and student achievement. In addition, the group served as its own control, as the first half of the course was taught in the standard seminar mode. Overall, there was little difference between the two modes of teaching, though changes were in a negative direction. That is, some of the scales on the questionnaire revealed a lessening of such aspects as cohesion, expressiveness, self-discovery and innovation. So overall there was a lessening in groups climate, especially with respect to relationships. In terms of the students’ estimation of the value of the technology, “both groups [Hobart and Launceston] are more optimistic about the potential than they are satisfied with their own experience of the trial.”

Asked to indicate strengths and weaknesses of the trial, participants noted far more of the latter. Particular weaknesses included breakdown in group rapport and solidarity, and technical problems such as breakdowns, slowness of cameras to identify speaking student and inability to read charts. Class size was also a problem, as the combined group was considered too large for a post-graduate seminar.

To the relief of the organisers, student achievement was unaffected by the trial. It was considered an overall success, though due to the cost it did not at the time lead to large-scale use at the university.

As for me, I remember it as quite a fun part of my course.