Back in 1998, I was lucky enough to pick up a job in the Centre for Higher Education Development (CHED) at Monash University, under the leadership of Graham Webb. We moved back from Hong Kong to Melbourne, and thus began one of the most productive and satisfying periods of my working life.

The highlight was the design, development and implementation of InterLearn, an online learning platform. It was by no means intentional, and it was probably fortuitous that we really didn’t quite know what we were doing. The idea of undertaking such a project today and complete it in a period of months seems ludicrous.

It all came about because of the need for CHED to offer a Graduate Certificate in Higher Education (GCHE) to its academic staff. As Monash University encompassed six campuses across three countries (Australia, Malaysia and South Africa), the course had to be offered flexibly (Flexible Learning was the buzzword/s of the day). Specifically, the GCHE was to be a combination of online learning and face-to-face workshops.

Though I’d been involved with academic staff development, my skills lagged far behind some of my colleagues at CHED. Partly to bring me up to speed, I sat in on seminars and workshops led by Graham Webb and Helen Edwards, and was hugely impressed by their competence and ease with which they handled the groups of academics. Observing their interactions, I wanted to be able to emulate the style of the sessions in an online environment. I have vivid memories of participants eagerly discussing personal examples of good and bad teaching/learning experiences that had influenced them. Skilfully, Graham and Helen gradually led them into coming up with a list of principles of good teaching.

Teams of us set to work developing the curricula for the four subjects of the GCHE. This was fairly bread and butter stuff using the style of blueprint common in ODL. The big challenge was the choice of platform, and this is where I joined forces with an old friend and colleague, Len Webster (also in CHED), to come up with something creative and effective. Bless his heart, Graham gave us excellent support, both in terms of resources and trust, and was ever-present for discussion and advice without being intrusive.

If you’ve been around a while, you may remember the clunky platforms (learning management systems) that were emerging at the time. Their overall structure involved a collection of folders into which various types of activities or resources were plonked (lecture notes, assessment, activities, discussion group, etc.). As Len and I sat around trying to decide how we were going to achieve our aims in such environments, we realised that it just wasn’t going to work (in other words, we didn’t like WebCT, later to become Blackboard). In order to check that it wasn’t just us being precious, a consultant looked at the range of software available, and concurred that none of it suited our aims and needs. Undeterred, we decided to develop our own platform (can’t be that hard, surely!), with the assistance of talented programmer and a skilled graphic designer (with Graham displaying confidence in our ability to deliver). I suspect that if either of us had contemplated the task ahead individually, we wouldn’t have had the courage to proceed, but we convinced ourselves that we could do it, and off we went, consuming plenty of coffee and muffins along the way.

Our aim was to have something simple, so that a study unit could be all inclusive of reading and activities, without having to jump in and out of different parts of the platform. To emulate the discussion I’d witnessed with Graham and Helen, we wanted simple web pages that incorporated opportunities to enter comments and ideas, and look at the notes of fellow participants. Overall, we wanted a series of web pages which incorporated self-assessed and shared activities, some of which would be shared with all participants and others to be shared with only the unit tutor. It took a bit of effort on the part of the programmer, Miles (from memory he was using PEARL), and while the platform functionality was going through a series of iterations, the graphic designer came up with a series of increasingly attractive page designs. In recognition of our aim to foster interactive learning on the internet, we decided to call the software InterLearn.

The way the web pages worked is illustrated in the following series of screen grabs: 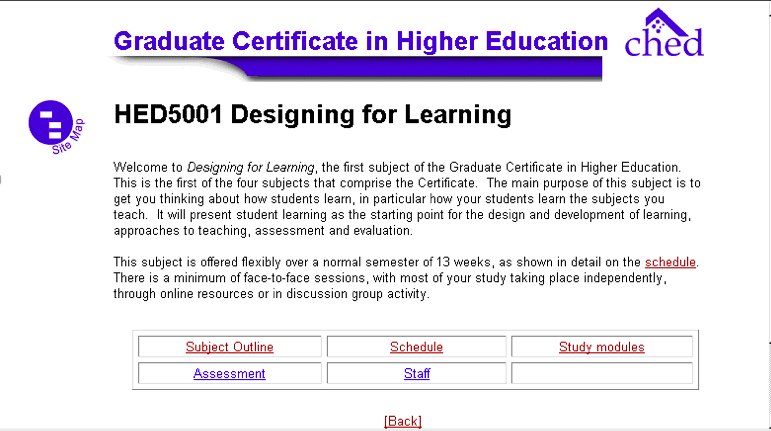 This is the opening page of the first subject of the GCHE, Designing for Learning.

Clicking on ‘Study Modules’ took the participant to the following page. As the pages comprised the personal and interactive core of the course, the participant needed to logon, using the ‘Enter Your Worksite’ link: 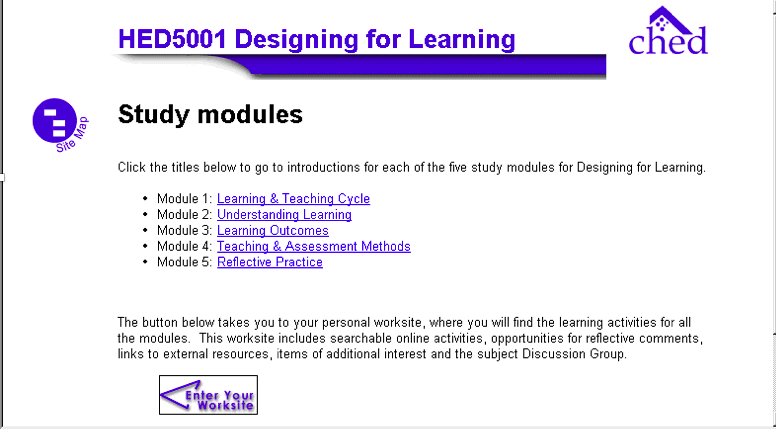 Once in the worksite, a map showed the overall pattern for the module, in terms of both structure and timing. 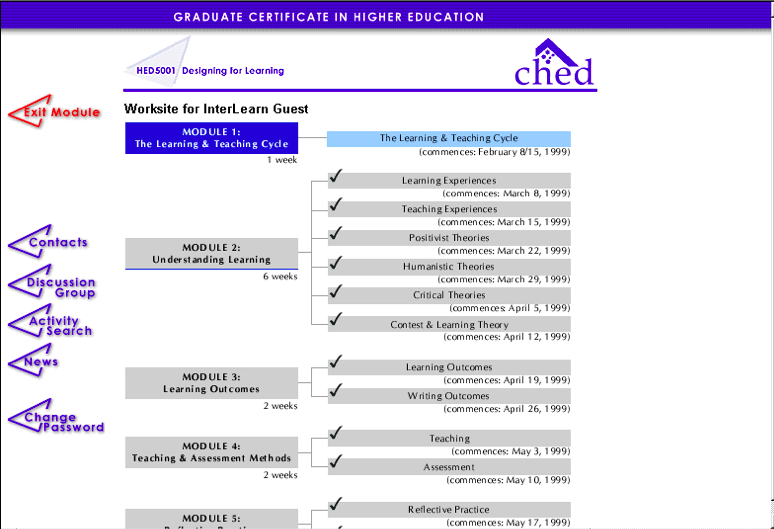 Most module topics comprised a week’s worth of study and activities. The focus was on activities, reflection and interaction with other participants, mostly through shared activities but also via a standard discussion group. The first three activities from Module 2 are shown below. 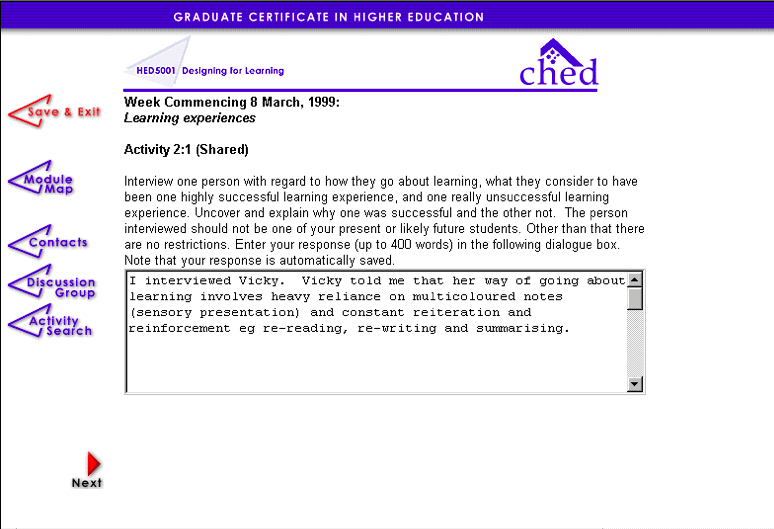 Note that the activity is labelled ‘shared’. Shared activities enabled each participant to view the responses of others, and engage in further reflection on any patterns that emerge.

We built this deliberately into the activity structure. A simple click on the ‘Activity Search’ button enabled the participant to search all shared activities by participant and/or activity number. 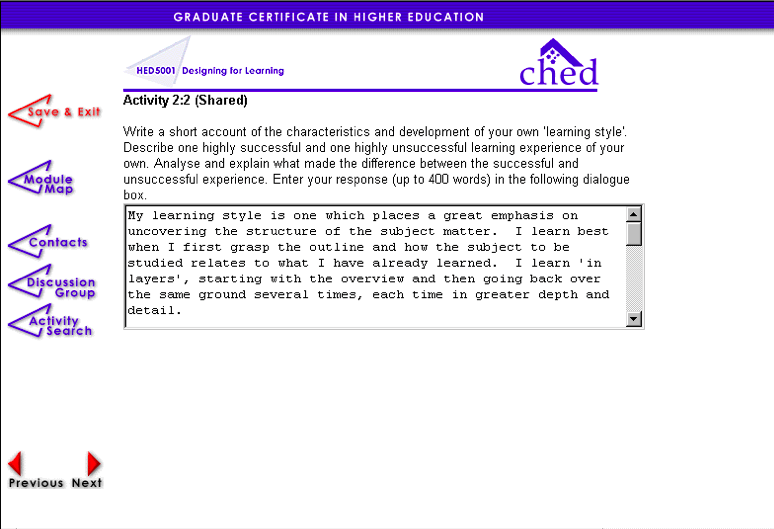 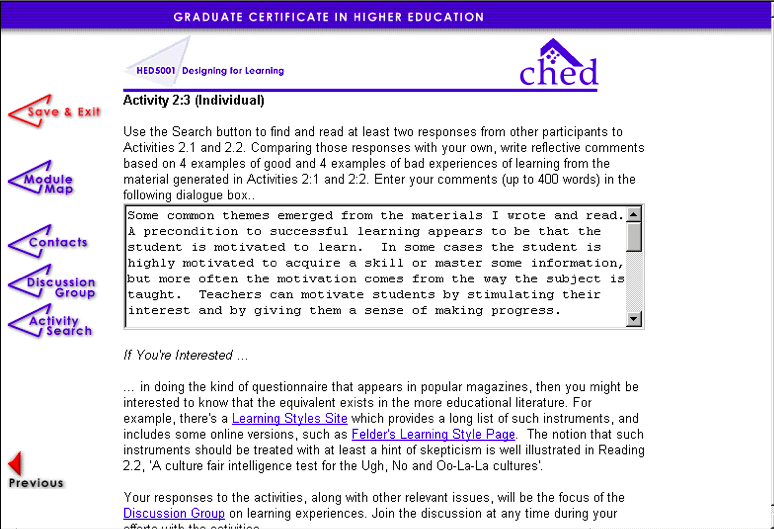 The following screen grab shows the use of ‘Activity Search’, with its simple drop-down menu to select any of the participants’ contributions. 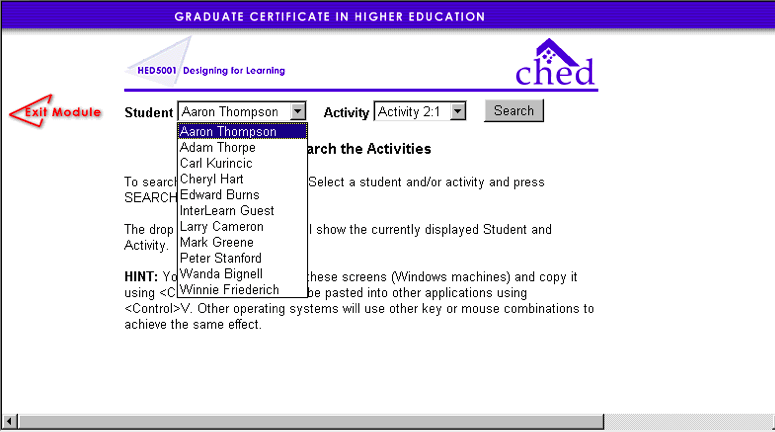 Finally, the following is one of the later activities, which is both shared and used for final assessment. As with Activity 2.3, you can see some optional additional reading for interest included after the activity. 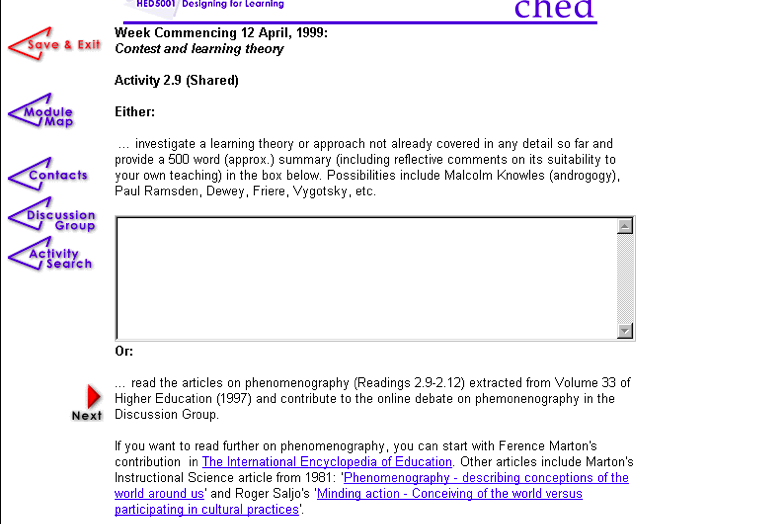 The timing was very tight, but we managed to have everything in place with a day or two to spare. As the site went live for Semester 1 in 1999, we eagerly waited and watched for the first activity entries to appear. Thankfully they did, and the course became everything we wanted it to be. The online components were backed up with workshops on each campus, and the evaluation from participants was highly positive. InterLearn functioned just as we’d designed it, and it went on to win  national recognition. Len and I published an article or two about our journey, including a chapter in one of Graham Webb’s books, entitled ‘The Reluctant Software Developers‘.

But of course all good things come to an end. Graham Webb left CHED to head Monash’s team in preparation for its first quality audit, and Len and I headed off to other jobs. InterLearn spluttered on for a while, but those who took over the GCHE were, unsurprisingly, not as committed as its originators, eventually transferring the course to Blackboard, which Monash had chosen as its platform. Nevertheless, the overall project remains one of the best I was ever associated with, both in terms of what we as a team achieved and the fun we had in designing and implementing something truly innovative.