Though I’ve never owned a yacht, I’ve always liked sailing, especially in small dinghies. This comes from my early teenage years, when I was lucky enough to spend summer weekends as a forward hand with a couple of school friends. Hobart is the perfect place for sailing, with its large river estuary and regular southerly sea breezes blowing up the River Derwent. There are plenty of clubs scattered around the bays and points, and the one I joined was the Sandy Bay Sailing Club. 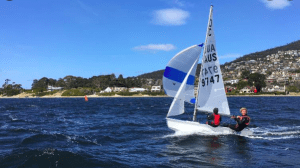 An International Cadet on the Derwent River. The sailing club is on the point in the background.

My first sailing experience was with David Buckley in an International Cadet, a basic little boat that was well suited to beginners, which both of us were. To join, I had to obtain a Safe Swimmer Certificate, which was a challenge as I wasn’t much good at swimming at the time. That was just as well, as during one of the first races we entered, we ‘bottled (turned over) some distance out in the Derwent. David scrambled onto the centreboard and managed to pull the yacht upright, but the wind took the sails and off he sped away from me. Lacking the skills to get back to me, I was left floating for some time (yes, we wore life jackets) until one of the club pickup boats rescued me. This incident was the only mention we received at the annual prize-giving evening, where we failed to have our sailing prowess acknowledged in terms of trophies or ribbons. 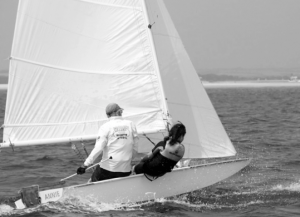 Note the more streamlined shape of the Rainbow.

It was fun, but I always looked on rather enviously at the dinghy raced by more able sailors, the Rainbow. It’s a skiff, flat-bottomed and nippy, capable of much more speed than the Cadet via a combination of shape and sail area. And, to top it off, the forward hand wore a harness for a trapeze, attached high on the mast. It enabled the forward hand to stand on the gunwale, stretching far out to provide balance in strong winds. It looked so much fun!

Then one day, during the school summer holidays, I was with a group of friends on Sandy Bay beach. One of the club’s more able young sailors, Chris Tennant, had his Rainbow out in the river. It was blowing hard, well over the 20 knots that normally would mean that races be called off. As it was mid-week, there were no officials around to enforce the rule. We watched with interest, as the rainbow was careening at speed across the river, with the mast bent alarmingly with the strong forces at work. At the time, aluminium spars were only just emerging (this was the 1960s), and Chris’ boat had the old wooden spars and spinnaker pole.

After a while they came in to the beach, and Chris asked whether anyone else wanted a turn. I jumped at the chance, and for the first time donned the trapeze harness. Chris manoeuvred the yacht out into the shallow water where I got it, and then he followed and instructed me on managing the jib while he took the mainsail and tiller. We headed out into the river across and slightly into the wind which was blowing hard up the river. As we tacked, Chris explained how to work the trapeze. I clicked it on and pushed out with my feet on the gunwale as I kept the jib sheet tight. The trick was to keep the leading leg stiff and bend the trailing leg to maintain stability.

The video below contains historical footage of Rainbows. It’s mostly in calm waters, though if you jump to about the four minute mark you’ll see some trapeze work in heavier weather.

The Derwent is wide at this part of the estuary, probably three or four kilometres. We went at least half-way across before Chris turned up into the wind ready for the fast run back to the beach. As well as the jib (which could be cleated), my task on the way back was to set and control the spinnaker. As we’d be heading mostly across the wind rather than with it directly behind us, we set a ‘shy’ spinnaker, meaning that the pole was set close to the forward stay. That way, the spinnaker became a second jib, providing plenty of power to maximise speed. Chris said to keep it fully set at all times (i.e. keep the spinnaker sheet tight) and he would control the yacht with tiller and main sheet. As final step to help us ‘fly’, Chris raised the centreboard.

And fly we did. The little yacht (12 feet 6 inches long – about 3.8 metres) took off in the strong wind. I was at full stretch on the trapeze, back arched to maximise the counterbalancing effect. We skimmed across the waves like a surfboard, everything humming as the rigging was strained to its limits. The feeling was of being right at the limit of control, and one mistake would see us bottle spectacularly. It was quite the most exhilarating feeling I had ever experienced, and I still remember it well, some 55 years later.

All too soon it was over, and we were back at the beach. I rushed back to my friends, grinning insanely and announcing that it had been better than sex. “How would you know, Murphy”, quipped Toby Thorp, “you’ve never had it!”

I kept sailing for a couple of years or so after that, with another friend, James Oakham, who luckily had a Rainbow. During summer we raced in the weekend at at the annual regatta, where we came second (our best ever result). Jamie even gave me a turn a helming from time to time, as once a year there would be a forward hands race, where we swapped places for the occasion.

During the intervening decades I’ve had the occasional opportunity to sail small dinghies, including Hobie Cats and similar when on beach holidays. And while living in Hong Kong, my old nautical friend Nic Robinson would on occasion take me out on one of the club boats at the Hebe Haven Yacht Club in Sai Kung. Hopefully I’ll get another chance or two …