Last year I posted about meeting my heroes, Roger Penrose (science), Mark Occhilupo (sport) and James Taylor (music).  I also mentioned rugby, and the legendary Mark Ella (who, unlike the other three, I hadn’t met) in particular, and so …

Hang on, let’s not rush with this, but take it back to how I came to be in the right place at the right time. 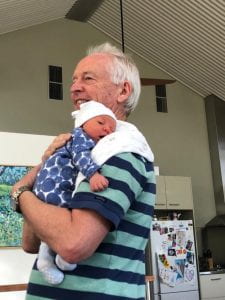 With travel restricted in Australia due to the pandemic, I applied for a permit to enter Queensland to help my daughter with the imminent birth of her third child. As there were a few things I wanted to take up to Brisbane, I decided to drive the 1684 km from Melbourne, overnighting in Dubbo. All went well, apart from a hiccup at the closely controlled border at Goondiwindi, and I was able to lend a hand (and enjoy myself immensely) for the two weeks I was there. 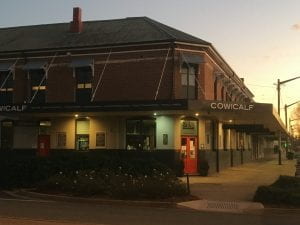 Then came the drive home. I wanted to get a bit further than Dubbo on my return journey, and a close examination of the map revealed a town I’d never heard of: Wellington, New South Wales. Checking the accommodation, I was taken with the curiously named Cow and Calf Hotel, which enticingly had recently renovated rooms as well as a bistro for my evening meal. Perfect! 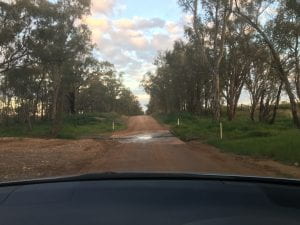 Should I keep going?

On the day of my return sojourn I headed off bright and early before 7 am, stopping for coffee mid-morning and making it to Moree for an excellent lunch at 61 Balo (I mention this just in case you’re passing through). After Coonabarabran Google maps took me off the main highway onto secondary roads, all fine except for a section which deteriorated in 20 km of rough unsealed road, with a few floodways to navigate! This meant my arrival at Wellington was later than planned, well after dark when I checked in with the bar staff on duty.

Found my room, dumped my stuff and headed downstairs for refreshment and food. No fancy beers on tap at the Cow and Calf, so thought it best to go local and ordered a schooner of Tooheys. Once consumed, headed to the bistro, were I found it full so had to go back to the bar to order food. No problem, found a table and watched rugby league while eating the tasty burger and chips (and another Tooheys).

The food was consumed and cleared, and I settled in to finish the beer and enjoy the next game, the Parramatta Eels playing the Canberra Raiders.

“Ok if we sit here?”, said one of two blokes looking for a table.

“Sure.”, I responded, not glancing up as there was an eye-catching passage of play on the big screen.

They sat down, I looked across and there, sitting a metre away (I know, not the mandatory 1.5 metres) was a familiar face. My mind raced, as I knew it was one of the twins (Mark and Glenn Ella, with third brother Gary also a Wallaby).

“Uh, this is embarrassing”, I mumbled, “I know you’re an Ella, but which one?”

So here I was, chatting to the person David Campese has described as “the best rugby player I have ever known or seen”! I’d brought up my son Nick watching our VHS tape of the famous Grand Slam Wallaby tour of the UK, wherein Mark Ella scored a try in every Test – against England, Ireland, Scotland and Wales. 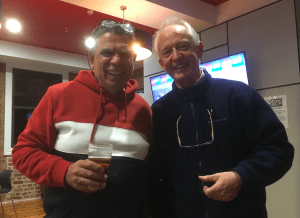 Thanks for taking the photo, Steve!

Desperately trying to act cool and calm, I introduced myself to Mark and his friend from Sydney, Steve. They were getting away with their wives doing a little weekend tour of outback NSW towns, and ended up in Wellington when they found all accommodation booked at other towns they tried.

The three of us sat there for about half an hour enjoying the game and pointing out referee errors (e.g. missed forward pass in the passage of play by Canberra leading to a try). When our beers were empty I offered to buy a round, but they insisted on buying me one (I continued with Tooheys, they drank Great Northern).

We chatted about rugby a little, including his visits to Hong Kong – he’d won there twice, and was commentating the year I saw David Campese scored the winning try in the final against New Zealand, the last time Australia won the Hong Kong Sevens. I mentioned a little about Tasmanian rugby, and we each offered our impressions of Italy, where he played after retiring from the international game.

There were of course a multitude of questions I’d have liked to ask, but I refrained, as it just didn’t seem appropriate. He’d gone there for a relaxed evening in a pub, not to be interrogated by an inquisitive ageing fan.

Towards the end of the first half their wives joined us and we all chatted amiably until they left during the break.

My overall impression? Overwhelmingly positive – Mark is relaxed and affable, revelling in the simple pleasures of life. I came away thinking that he is the archetypical Australian, the best example of all that is good in our national character.

And yes, that smile – the slightly cheeky grin – it’s there most of the time.

If you’d like to see those four famous tries, here you go:

And since you’re still here, how about this wonderful team try featuring Mark (number 10), brother Gary (13) and finished off by David Campese (11):

PS Since posting this, I’ve come across a wonderful interview by Stan Grant with Mark, brother Glenn and sister Marcia (also played for Australia – netball). Click on the pic to take you to SBS On Demand, where you may have to register (free) to watch.

One thought on “When you meet your heroes – Mark Ella”