‘Never meet your heroes’ is the oft-quoted mantra, clearly implying that they’ll disappoint you if by chance (or otherwise) your paths cross. Now maybe I’ve just been lucky, but I’ve managed to meet my heroes (albeit fleetingly) in three of the major categories (music, sport and science) and they’ve all been magic memorable moments. 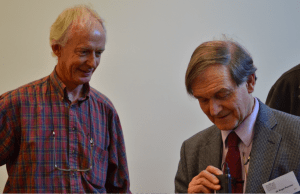 Sir Roger and I

I’ve already written about my scientific hero, Roger Penrose, following my attendance at a talk he gave in Oxford a few years ago. I’d first come across his work as an undergraduate, and he’s still going. Not only did I see him in action, but also had the chance to chat with him afterward, and found him to be a charmingly unaffected individual. He just loves and lives for science and mathematics, continuing to amaze into his 80s.

I’m a rugby fan, and admire some players (e.g. Mark Ella), but my sporting hero is a surfer, Mark Occhilupo (known as Occy). Occy emerged in the mid-1980s as a surfing prodigy, a goofy-footer (left-handed) with awesome power and ability. He hovered around the top of the rankings without becoming world champion, then slipped away into obscurity as a result of depression and other factors. Like the phoenix from the ashes, Occy rose again in the 1990s, finally making it to World Surfing Champion in 1999 at the grand old age of 33. And the secret of his success? Apparently, according to my friend Andrew Tompson, he eats a banana just before entering the water. 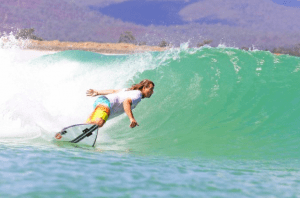 I ran into Occy by accident rather than design while traversing the annoying switch from international to domestic at Sydney Airport. It was late 1999, and Occy had been crowned world champion just the week before. I couldn’t believe it, there he was, by himself, standing in the irritating line for the transfer between the terminals. We started chatting, and I found him to be delightfully amiable and laid back. Loosening my inhibitions, I announced to all in sundry that here was Australia’s newest champion, and luckily there was some acknowledgement and applause. Occy also agreeably signed my boarding pass (the only paper handy) and it had pride of place on my pinboard at work for many years. If you want more, here’s his Facebook page, Instagram link, and if you’d like to see him surf, here’s highlights from 1994 to 2006.

If you know me at all, then you’re well aware of my musical hero – James Taylor. It’s been an almost lifelong obsession, James Taylor being the only musical artist of whom I would buy their latest album without hearing it first. It may surprise you to learn that he has continued to release albums at regular intervals, and in fact has received multiple grammy Awards, and achieved a number one Billboard album in 2015 for ‘Before This World’.

In the mid-1990s I finally had the opportunity to see him in concert. I was working in Hong Kong at the time, and he undertook a brief Asian tour that included a live performance at the Hong Kong Coliseum. It’s a pretty good venue with acceptable acoustics. It was a fabulous event, with his son Ben (from his marriage to Carly Simon) being among the backing singers. I attendee with a couple of friends, Ronnie Carr and Mavis Kelly, who enjoyed it almost as much as I did. 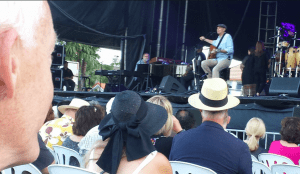 Had great seats at a JT concert in Napier

Afterwards we dutiful adjourned to the nearest hotel, the Holiday Inn. Reflecting on the evening and sipping our beers in the bar, I glanced across to the foyer and spied some members of the band strolling in. I quickly left my bar stool and accosted one of the band I recognised, Clifford Carter. He was open to a chat, and explained how pleased they’d been with the concert, not having known how they’d go in Hong Kong. Ben Taylor then wandered in, and I had a brief word with him, explaining what a big fan I was. “Me too” was the remembered reply.

Imagine my joy when a few minutes later James himself came into the foyer, only to be accosted by me and another local fan. He was gracious and polite, and I can’t remember all I mumbled to him, apart from asking whether Mona was real (he sings a song about a pig, Mona, who “got too big to keep and too damn old to eat”). My regret was that I had neither a pen nor a camera, so there is no lasting legacy of the meeting – we did shake hands though.

I’ve since seen James Taylor in concert three times – once with Carole King – and all have been glorious events. And I’m convinced that he is a good person, confirmed recently during an interview with Kerry O’Brien, who when asked to name the nicest people he’d interviewed, nominated Bette Middler and James Taylor. I remain an obsessive fan.