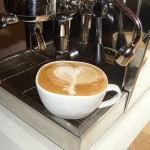 Confession: I’m a coffee addict. I don’t drink huge amounts, but must have a coffee every morning, usually at a local cafe.

Now here in Australia we tend to think of our coffee culture as a quite recent phenomenon, with Melbourne considering itself the coffee capital (just lost my Sydney readers). Our strong communities of Italian immigrants (and the even more numerous Greeks) have ensured that we’ve taken on our love of coffee with gusto. I’m a ‘flat white‘ myself, naturally without sugar. 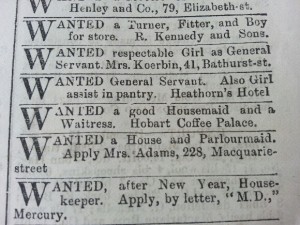 So it has come as a bit of a surprise (to me anyway) to discover that our coffee history is a bit richer than I imagined. A couple of weeks ago at Camberwell Market I bought a couple of old issues of the Hobart Mercury newspaper (one for each of our birthdays, but from way back in 1889) for a mere $2 each. Perusing the advertisements for the issue of Wednesday Morning, December 18, 1889, I was intrigued to find the notice wanting staff for the ‘Hobart Coffee Palace’ shown in the pic. 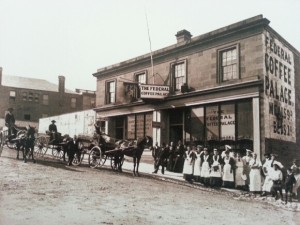 Subsequently, and by remarkable coincidence, I purchased a book of old photos of my home state (Tasmania: Classic Images), and there was a photo of said coffee house! As the caption explains,

“Coffee rooms or palaces were first set up in the 1880s to encourage people to socialise away from pubs and their early promise encouraged private traders to enter into the market. Many palaces had grand names like the Federal and the Imperial and employed uniformed staff to impress their customers and promote their non-alcoholic beverages. They were never as popular as pubs and once the novelty wore off patrons became bored or intimidated by the temperance message. By the beginning of the First World War coffee palaces had all but disappeared.” 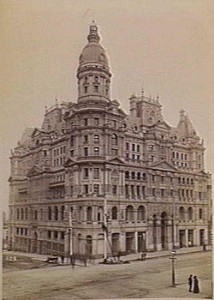 The Federal Coffee Palace in Melbourne

Naturally this prompted me to a little further investigation, and there in our good friend Wikipedia I found a nice little history of coffee palaces in Australia. There were dozens of them around Australia, often highly imposing buildings, so the term ‘palaces’ was by no means a misnomer. Melbourne’s famous Windsor Hotel started as one of these purveyors of the sumptuous brew that we all (well, most of us) crave and relish.

Postscript: I’ve penned this piece partly to reinforce the message from a previous post about the joys of real books, and the discoveries that can be made without resorting to the Web. Admittedly the bit at the end included an internet search, but the initial discoveries were both via real hard copy primary sources, one a fragile newspaper from 112 years ago.