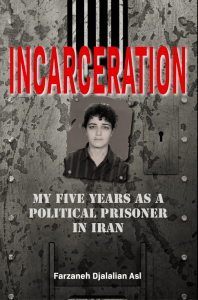 I’ve edited thousands of documents (reports, articles, chapters, books, letters, theses, etc.) over the years, probably comprising millions of words. I enjoy it. There’s a great sense of pride and accomplishment in reworking text, spotting errors and typos that others have missed (e.g. see My greatest contribution to Monash University), and offering rewriting suggestions that are welcomed by an author (not always the case, of course). A recent editing task has been one of the most fulfilling and worthy efforts I’ve ever undertaken – Incarceration: My Five Years as a Political Prisoner in Iran.

I was introduced to Sarah Djalalian a few years ago, when she was looking for someone to help her write a memoir. It didn’t take long to realise that Sarah had an amazing story to tell about her early life in Iran. Though her story is long and complex, the essential focus of Sarah’s riveting tale is Iran’s Evin Prison. 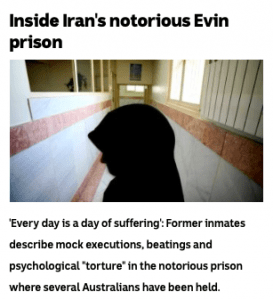 Here in Australia, most of us are familiar with the notorious Evin Prison, courtesy of a high-profile case concerning an Australian academic. Dr Kylie Moore-Gilbert, a Melbourne University lecturer on Middle Eastern studies, was sent to Tehran’s Evin Prison in September 2018 and sentenced to 10 years on espionage charges. She was released in a prisoner swap with the Iranian authorities two years later.

Sarah was imprisoned in Evin nearly four decades earlier, as a student protestor during the demonstrations against the repressive Ayatollah Khomeini government, installed in 1979. Her incarceration is the heart of the book, but there is of course a lot more to her life and experience, and this is what we tried to piece together in her story. 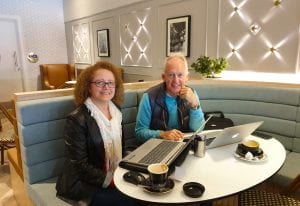 We have met and talked at length over the past years, and in that time I’ve learned far more from Sarah than she has learned from me. We’ve had countless chats on the phone, emails aplenty, much messaging and, most productive of all, coffee mornings. These were especially important for discussions about structure and detail. For example, at first the book was going to be purely chronological, starting with Sarah’s early life and background on Iran. But we realised that we needed more impact at the beginning. Thus it was that we made the first chapter focus on 30th Khordad 1360 (the Persian date for 20thJune 1981), the fateful day she was arrested. It went through many drafts, as each time Sarah would write something, there’d be so many questions that I as a reader wanted to know. For example, how did you feel when you woke up that morning? What did you eat? Did your family know what you were going to do? What were you wearing? How did you meet with the others? And so on. For all this, I must emphasise that this is wholly Sarah’s book, not mine, and I believe that her ‘voice’ comes through clearly and emphatically, especially her views on life and love.

The book includes informative descriptions of life in Iran in the 1960s and 70s before the Ayatollah took over. Clearly Sarah enjoyed a pleasant life in her beautiful country, up until early in her university studies. She and many of her fellow students became supporters of the Mujahedin, as they witnessed the ever-growing power and oppression of the government. In case you’re wondering, the Mujahedin is not a ‘terrorist’ organisation, at least not according to the US, EU, Canadian and Japanese governments. 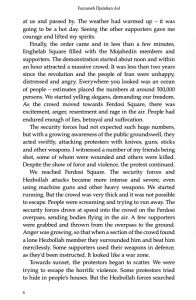 Incarceration follows a mostly chronological path, including details of Sarah’s happy early family life as she grew up in Iran. This leads into the growth of her political activity at university, leading to the fateful day that forever changed her life – the beginning of more than five years of captivity in Iran’s infamous prison system. Her release was not the end of her struggle, mostly due to the ongoing close scrutiny she was under from the authorities. This, and the looming obligation for her younger brother to join the army, led to their escape from the country, by no means an easy task. It was a secretive journey, aided by kindly Kurdish people smugglers, that led Sarah to Turkey and eventual freedom.

This brief summation of course does no justice to the severe hardship, torture and deprivation that Sarah suffered. The horrors inflicted on Sarah and her fellow prisoners are outlined in Incarceration, some of it making difficult reading. It is a tribute to Sarah’s strength, and the bonds that were formed among the sufferers, that she has survived and has been able at last to document her story.

Postscript: Sarah invited me to say a few words at the book launch, and both of our (short!) speeches are shown below, courtesy of the publisher, BusyBird.

Finally, if you’d like to buy a copy of the book, here’s the link provided by Sarah.

2 thoughts on “A special book: Incarceration”