I like my neighbourhood. I’ve lived here for over two decades, having moved into the house in August 1998. My suburb is called Murrumbeena, which some wit has defined as an Aboriginal word meaning “Cant afford to live in Malvern” (for those not in the know, a nearby more exclusive locale).

The reason I like my neighbourhood so much is the neighbours – all friendly, and most considered friends. One in particular is Andrew, who lives almost directly across the road. Andrew and Christine brought their new-born baby Melina across to meet us way back in 1999, and we’ve shared our lives, with all the joys and sorrows, in the intervening years. 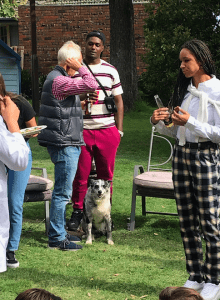 I was prompted to write this post as a result of receiving a couple of photos of me at his place, attending what was probably my last social event before the current lockdown. In particular, one of the pics shows Jemma, his dear dog who unfortunately had to be put down earlier this week (old age). When I say his dog, it was actually his father’s beloved companion, and Andrew happily took on responsibility when his dad died a while ago. Though old and somewhat ungainly, Jemma had been managing walks with Andrew, Melina and Liam (2nd child, keen photographer, not-so-keen mathematician) until the end.

The occasion (another of Andrew’s legendary barbecues) was an end-of-season party for Melina’s football team, Melbourne Victory. They had (unfortunately) lost their final match to their old rivals, Melbourne City, and Andrew kindly offered to host a gathering before the team members headed back home (some a VERY long way e.g. USA and England). If you hadn’t realised already, Melina is an immensely talented player (see proof below), as well as being a nice neighbour and fellow surfing nut.

The person I’m talking to is Myles Jack, boyfriend of Darian Jenkins, the U.S. player on the right. He was spending time in Australia at the end of his playing season in the NFL. Andrew had mentioned him, as he had been hoping to get Myles to join us at a Super Rugby match, so that he could see players in action without all the protective gear in which he is usually attired (although it’s perhaps understandable, given his contract is in the many millions!). 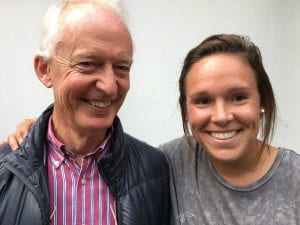 It was a lovely casual gathering, and the team members seemed a very friendly bunch. I managed to chat with a few of them, including the outgoing and demonstrative goalkeeper Casey Dumont, who described in detail the moments that led up to the opposition goal that sunk their season. One player I’d watched and enjoyed, given her obvious skill level (that subtle use of time and space we admire) and passion for the game, was Emily Menges (from Portland) who happily posed with me for a pic. 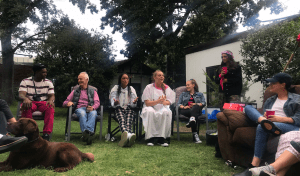 I’m informing Myles of the little-known fact that the USA twice won the Gold Medal for rugby at the Olympics.

Jemma was not the only dog in attendance. As you can see, also present was Caesar (dog next door), with whom Jemma had a somewhat fractious relationship. I’m not sure of the names of all the players in this next photo, though that’s Casey in the weird white getup (it was an optional dress-up party) next to Darian. All in all, a fun day.

If I seem a little wistful, it’s probably true, as we all quietly get on with our currently restricted lives. But of course there’ll be better days to come, and more memorable moments with my neighbours.