Ho perduto due corone! – My two Rosary beads are missing! – these were the first words (not that I understood them) uttered by Linda’s mother as we arrived to help her with the recarpeting of her bedroom. We got there nice and early, as the carpet layer was due at 8:30 am. It was no great surprise that the Rosary beads were missing, as she is nearly 90 years old (not Linda, her mother) and legally blind. She can apparently still see vague shapes, and manages to live alone in her house and beloved garden, with the regular assistance of Linda and her two sisters, one of whom lives next door.

Linda rapidly spotted a couple of sets of beads in a bowl, but these weren’t the missing ones, so we abandoned the search to set about more important matters (coffee, etc.). Happily the layer arrived at the allotted time and set about his business. It was all done and dusted by late morning – carpet laid, vacuuming finished, bed reassembled, side tables positioned, (heavy!) dressing table in place – so we settled in for a quiet lunch. I like to ask about her early life. 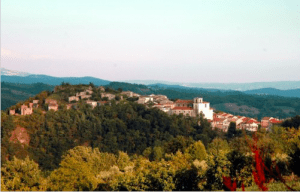 Niro Di Rienzo Maria Domenica was born in 1931, in the small village of Colle D’Anchise, located in the province of Campobasso in the Italian region Molise. Her family was relatively comfortable, in that they had land to cultivate and animals to tend.

But then World War 2 erupted. Maria tells of her parents taking her to nearby Monte Cassino when she was about 9 years old. They visited the Abbey, famous in the torrid Battle of Monte Cassino, where the monks took them to the caverns underneath to see the armaments stored in readiness for the Italian army. Though a harmless village, Colle D’Anchise became a focus of wartime activity, presumably because of its strategic location on the route to the north. First came the Italian army, and then the dreaded Germans.

The village came under attack from the air on more than one occasion. Maria was out on the road looking after a goat when a fighter plane came over and started straffing anything that moved. She dived into a ditch, not before sensing a bullet whizzing closely past her ear. 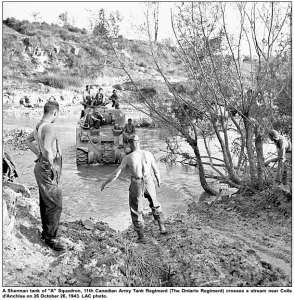 The worst occurred in October/November 1943, as the Allies advanced through Italy. The Germans were heavily entrenched in the village, including a Panzer Grenadier Division, as its mountainous position afforded a strong defensive position. The Allies were represented by the 1st Canadian Infantry Division, who were tasked with driving out the Germans. It was an intense, deadly battle, with significant artillery fire from the Panzers, Sherman tanks and mortars. It was estimated that 30 Canadian troops and 100 Germans were killed, according to details of the fighting around Colle D’Anchise, provided by Canadian Soldiers.

The glaring omission from the statistics is civilian casualties. Just imagine you were a 12 year old girl living in the village. Maria has clear memories of the battle, including a period of three solid hours of ceaseless artillery bombing. The noise was incredible, and their house was hit. Her father was badly wounded, and she and her sister emerged completely covered in dust and soot from the destroyed chimney. She helped with tending to her father, who was subsequently taken on the back of a donkey to nearby Campobasso for medical help. From there he was taken to Bari on the East coast, as his condition was deteriorating, and he died there about a month later. As the battle concluded, she witnessed first hand the shooting in the head of a Canadian soldier, along with the sight of the Canadians chasing the German perpetrator into the fields and killing him.

She rightly has little sympathy for those who describe the current crisis as a war. And who can blame her? 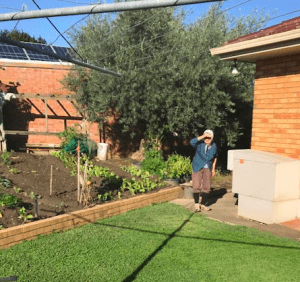 After lunch, before departing, Linda and I helped with the final task of making the bed. The blanket and sheets looked quite old, and I was astonished to learn that they were part of Maria’s dowry. Yes, they are nearly 70 years old! Good quality linen never wears, it seems. Her initials are even embroidered into the top sheet. The bed cover was a gift from her sister.

As we left, she headed into the garden to work in her garden, happy to potter around with her vegetables. She has a lasting legacy, with three daughters, seven grandchildren and numerous great grandchildren.