Fossicking around in my cupboard last week, I came across a smart black t-shirt with a United Nations logo on it. It was a gift from a group of students about six years ago, and was a reminder of the following:

The best project I worked on for the Commonwealth of Learning (COL) started in 1999. It was the best from every perspective: for COL, for the United Nations High Commissioner for Refugees (UNHCR), the participants and for the project team. I was working at Monash University, and had managed to earn enough consultancy income to support my attendance at a couple of conferences, the first at UBC in Canada and the second in the UK (the 8th famous ‘Cambridge Conference’ of the ODL community). 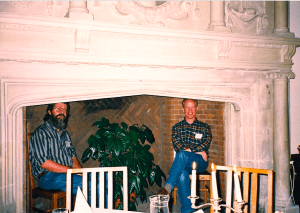 Fun at the Cambridge Conference with Mick Campion

While in Vancouver I visited COL, and when I told Raj that I was heading to the UK, he asked me if there was any chance I could make a detour to Geneva. I readily agreed. It seems that COL was in the running for a contract to provide ODL services to the UNHCR. The international agencies had apparently been on COL’s radar for a while, and the chance to bid for the provision of an ODL course was too good an opportunity to pass by. At the time of my visit, COL had just been informed that they were in the final three institutions under consideration – Canadians were favoured as the aim was to develop a bilingual course in English and French. Raj considered it a good idea to have a representative visit the UNHCR and meet with the team seeking to offer the course, a radical reorganisation of an existing workshop on report-writing skills. Should COL’s bid be successful I was to be the designer for the course team. 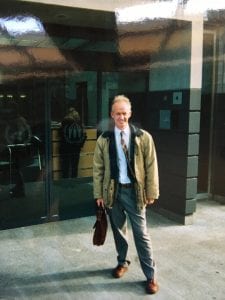 Outside UNHCR training offices in Geneva

Having done my bit at the Vancouver and Cambridge conferences, I headed off to Heathrow and took off for Switzerland. All went smoothly, and I duly presented myself at UNHCR headquarters for my appointment with the training staff, led by Mike Alford. It was Mike who’d been fired up by the idea of transforming what was a traditional face-to-face workshop into a more effective and affordable alternative though the application of distance education technologies. Though most of my memories of the visit are vague, I well remember being shown the teaching materials that were in use at the time. It was easy to spot their deficiencies, as they comprised a standard package of general report writing tips, with no apparent real effort to tailor the course to UNHCR specific writing requirements. While not being too damning, it was straightforward to point out what could be done to vastly improve the course. And the costs of offering the course were huge, flying in participants from all over the globe for a fortnight’s intensive  training in Geneva. A month or so later I learned that COL had won the contract, and so the course team started work. For COL, the three main members were Angela Kwan as manager, Maree Bentley as writer and myself as designer.

We immediately started work on the course blueprint, and organised a visit back to UNHCR headquarters for more prolonged and detailed consultation. Again we were well looked after be Mike and his team, who were both gracious hosts and highly collaborative and cooperative in our meetings and discussions. They also arranged crucial visits to key UNHCR staff members who were the recipients of reports from country and regional representatives. They not only briefed us on the report-writing requirements, but also provided copious examples of material they’d received. These examples were crucial in ensuring that the course focussed on the specific requirements of the UNHCR, which are many and detailed. My memory is that we left with a pile of documents nearly a metre high! Once the blueprint was approved by UNHCR, we started work on the draft course materials.

At the same time, Maree and I visited Thailand to speak to staff involved at country level and to gather further examples of writing requirements and specific reports. Again, this measure to ensure the relevance of the course was productive, as we learnt much about the pressures on refugee coordinators. For example, we were informed that it was not unusual for a group of refugees to come across the border from Myanmar and be held by the Thai army. UNHCR staff would meet with the refugees, and be required to mount a case for them to stay in Thailand, often with less than 24 hours to prepare a short report to convince the army general.

The course development work ran smoothly. The blueprint proved invaluable and nicely underpinned the process. Maree would draft a unit, pass it to me for for further refinement, including the addition of activities and various interactive elements. Once we’d been back and forth a few times, the units were sent off to COL and UNHCR for comment and approval. Angela coordinated the whole process very nicely, all the time ensuring we kept to the promised timeline. Once approved, the units were translated into French, as the course was to be offered bilingually. The overarching key factor of the course was that it was wholly based on processes and examples from UNHCR – everything was ‘real’ to the participants.

And so ‘Writing Effectively for UNHCR’ began its life. With smooth coordination and the talents of a skilled team of tutors, the course was a great success, quickly becoming the envy of other agencies. Within a few years, modified versions were developed for multiple organisations, including UNICEF, ILO, UNESCO, the World Bank, Women Deliver, Norwegian Red Cross, Norwegian Refugee Council, and the Council of Europe. The initial version was print-based, and was soon supplemented with DVD and eventually on to fully online. The success also led to other projects with UNHCR, including a course on data management for which I was one of the tutors. The experience of working with dedicated UNHCR front-line operative staff was a highlight of my teaching life.

And they sent me a lovely thank-you card with the t-shirt.