Learning by drone? Well, not exactly, but as was probably inevitable, teachers are using drones to help educate their students. Want to read more about it? You’ll find a nice little introduction and outline of what’s happening in the latest issue of Innovating Pedagogy, the annual report from the UKOU and partners. When I say annual, it isn’t quite true this time, as there wasn’t a 2018 version, this latest one being released early in 2019 (perhaps partly due to the intense internal machinations of that now veritable institution, largely the result of the disastrous reign of its lately departed VC). And just to remind you, the aim of the reports is to explore “new forms of teaching, learning and assessment, to guide educators and policy makers”. 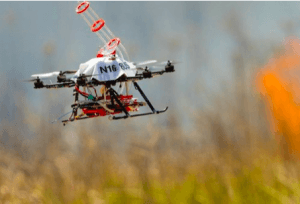 When I saw the heading ‘drone-based learning’, I had visions of ODL materials being delivered to isolated learners akin to the blurb we hear about drones delivering pizza, but no, I was wrong. Drones “are being used in education as a way to enable or enrich exploration of various physical spaces. They support fieldwork and enquiries, by enhancing the capability of students to explore physical environments, enabling data collection from novel perspectives.” “The use of drones helps learners to develop new skills, including planning routes and interpreting visual clues in the landscape.” All highly worthy, but a tad underwhelming – might as well investigate binocular-based learning.

What about the other nine topics in the report? Overall, it’s a nice mixed bag, with the technology-enhanced approaches balanced by more person-based strategies. 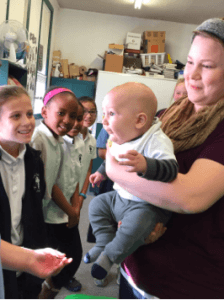 Source: Official website of the Roots of Empathy organisation

An eye-catching topic is the last one, Roots of Empathy, designed to increase young learners’ emotional understanding. How is this achieved? “Roots of Empathy is designed for school children between the ages of 5 and 13. During the school year, the class has a visit every three weeks from a baby and parent who live locally. The children sit around the parent, baby, and instructor, observing the baby’s development and emotions, and how the parent and baby interact. A Roots of Empathy instructor guides the pupils, helping them to reflect on the baby’s development and to put the baby’s feelings into words. The baby functions as a ‘teacher’ and lever for the instructor to help the pupils identify and reflect on their own feelings and the feelings of others.” Importantly for the programme, which originated in Canada and is now available in other countries, evaluation has been positive, with decreases in aggression, and “an increased perception of the classroom as a caring environment among the Roots of Empathy pupils when compared to control groups, as well as an increased understanding of infants and parenting.”

Demonstrating the range of programmes covered, the remaining eight topics are:

This year’s report is, as usual, a collaboration between the UKOU and another institution, in this case Norway’s Centre for the Science of Learning & Technology (SLATE). As usual, each innovation is rated according to its potential impact. Interestingly, this time only the first two are are deemed to have high potential, with all the others rated medium (I suspect that drone-based learning only just scraped in – I would have given it low). And as we’ve seen before, some of the innovations are already familiar to us in slightly different forms and emphases. It’s not a problem, just be prepared and don’t be cynical about it!