Back in the late 1970s, during my first teaching job at Hobart Technical College, one of the staff from the School of Business Studies was offered a two-year contract in the Seychelle Islands. I was both impressed and envious, imagining how wonderful it would be to have such an opportunity. This resolve was strengthened when, two years later, he chose not to return but to stay on in the island paradise. It was this example that probably inspired me, if the opportunity ever arose, to seek overseas employment.

Move forward two decades, imagine my delight when I received an invitation to take on a consultancy for the Commonwealth of Learning with the Seychelles! The background was that, like many small nations, Seychelles didn’t have a university, which means that Seychellois who wished to pursue higher education had to go overseas for a few years at great expense for their qualification. The additional problem was the tendency for a significant proportion of graduates not to return, thus depriving the nation of qualified, trained professionals. The then Minister of Education, after discussions with COL, asked for a formal report on how distance and open learning might be employed to allow Seychellois to obtain degree-level qualifications without leaving the islands. It was anticipated that the first course made available should be teacher education, and that the investigation should include a workshop for staff of the School of Education and Community Studies at Seychelles Polytechnic.

Given the importance and scope of the consultancy, two of us were required, and first choice was the Dean of Education at the OUHK, where I was working at the time. Much to my surprise (to put it mildly), he turned it down, citing too much work. I must admit that I was willing to take it on no matter how busy I was – it seemed like the consultancy opportunity of a lifetime! Luckily I was quickly able to recruit an excellent replacement, Prof. Rob Walker. I knew Rob from my time at Deakin University, where he designed, developed and taught highly innovative teacher education courses.

Contracts were signed with minimum fuss and delay, the basic plan being for us to go to the Seychelles, meet the ministry staff, visit some schools, run a workshop on ODL and course materials development for about a week, and write a report on how tertiary distance education could be offered in the island group. As flights to the Seychelles ran weekly from Singapore, the overall visit was for a fortnight, which would give us a few days of holiday at the end of the period. All good, with Rob and I set to rendezvous in Singapore, me flying in from HongKong and he from Melbourne.

It started badly – nearly didn’t start at all – when I was at home at about 5 pm doing the final packing for my 8:30pm flight, and looking at my ticket saw that the departure time was 1830! In a panic, I bid a hasty goodbye and grabbed a taxi (thankfully numerous in Hong Kong), imploring him to drive as fast as possible to the airport (Fai dee la!). This was at the time of the old airport at Kai Tak, so luckily it didn’t take too long from Shatin, though I remember thinking at the time that if ever I was going to have a heart attack, this is it. I made it with 10 minutes to spare before the gate shut. 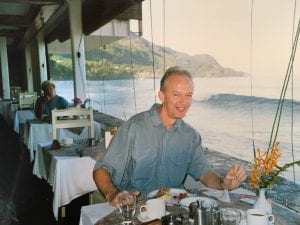 Breakfast at the hotel

The rest of the journey was relatively uneventful: successfully met with Rob in Singapore’s sprawling Changi airport, and enjoyed the flight on Air Seychelles, arriving in the morning to be greeted at the airport by a couple of ministry officials. We had a brief meeting at the ministry, outlining the schedule for the visit (unfortunately the minister wasn’t available at the time), before being taken to our comfortable beachside hotel (probably the Coral Strand, if my memory serves me correctly). A daily swim became a regular habit. We also had a chance for a wander around the capital, Victoria, which is a pleasant town, partly because there are no international ‘chain’ stores and restaurants (the Seychelles government sensibly limits both tourist numbers and over-development). An abiding memory is enjoying (yes, truly!) the delights of a toasted bacon and banana sandwich at a local cafe. 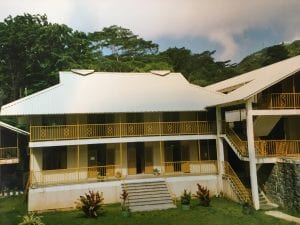 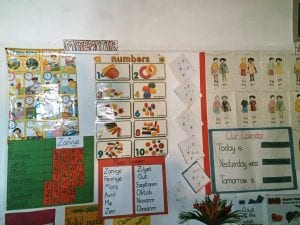 Sensibly, arrangements had been made for us to acquaint ourselves with education in the Seychelles by visiting local schools, both primary and secondary, and this took place the next day. They were both eye-opening and a delight, especially the primary school. First impressions were positive, with nice buildings in a picturesque setting, and a warm welcome from staff and students. 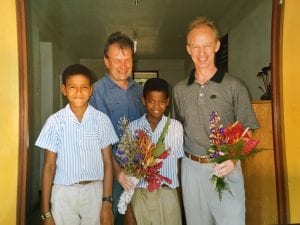 What sticks in my mind the most was the revelation that classes were trilingual (English, French and Creole), as can be attested by close inspection of the pic of the wall posters. And we appreciated the flowers very much! I must admit that my lasting memory of our visit to the high school was the principal proudly telling us that for the first time for many years there were no pregnancies among the students.

Armed with at least a cursory knowledge of the Seychelles education system, we embarked on our workshop. The participants comprised a pleasant, engaging group of teachers who were open to express themselves and come to grips with the intricacies of ODL. Naturally the workshop was strongly activity based, enabling them to come to grips with the reality of course design an construction. We also had to be as flexible as possible, modifying the schedule daily in response to the participants’ feedback (you know the sort of thing: ‘write down three things you learned today and something you’d like to know more about’). Although I knew Rob pretty well, I hadn’t worked with him as closely before, and I was happy and relieved how well we complemented each other. Rob is great at heading off on interesting tangents, and I well remember an activity he led that illustrated the difference between objective and subjective knowledge: he asked a pair of participants to describe the watch that one of them was wearing. The ‘non-owner’ described the watch, telling the brand, describing the style and so on, while the owner outlined who gave them the watch, under what circumstances, and what the watch meant to them. 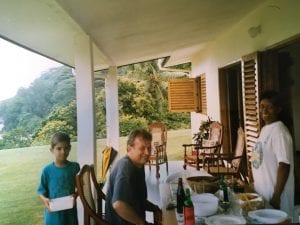 Look closely to see the breadfruit chips on the table

And so the week passed exceedingly pleasantly, interspersed with social activities (Seychellois are a relaxed and playful people), including a sociable evening of food and dancing (no pics provided, to protect the innocent) and a lovely meal at one of the participants’ homes, where our meal included breadfruit chips – apparently if you eat breadfruit you will return some day, so I’m hopeful of another visit as I haven’t managed it yet. 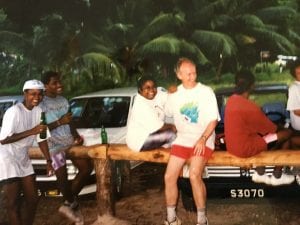 My one and only Hash House Harriers event completed

I was also invited to participate in a Hash House Harriers event the upcoming Sunday, for which I readily and foolishly agreed, and was able to borrow runners from the participant’s husband. I say foolishly as I’d never done a Hash run, and this one involved a long trek through the rather formidable jungle. 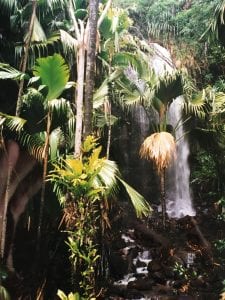 There were plenty of ‘nasties’ there, including the biggest hornet (if that was what it was) I’ve ever seen, fording a stream, and dodging trees with sharp thorns ready to tear you to shreds if you strayed too closely or grabbed for them as you fell over. I proudly completed the course (kept the certificate on my board at work for years) somewhat slowly, running with the women rather than the men. 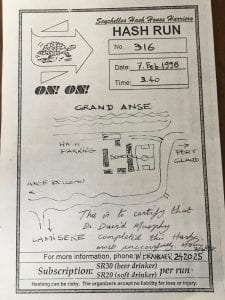 My HHH certificate – it took over 3 1/2 hours because I got lost!

Once the workshop was completed, we returned to the ministry to again meet with staff, and this time the Minister was present. The meeting went well, with the Minister enthusiastically involved and happy to provide his thoughts on how the outcomes of the consultancy could be implemented. He was firmly supportive of our work and ideas, and provided helpful advice and detail, which helped to inform our final report. This report was completed within weeks of completion of our visit, and a portion of it is still available on the COL website. It includes nine specific recommendations, as well as the following brief overview:

Overall, the model thus proposes that a small Centre of Distance Education be set up within the School of Education and Community Studies of the Seychelles Polytechnic, and that this Centre be responsible for offering, in the first instance, a Diploma in Early Childhood Education for a targeted group of in-service teachers. Subsequent programmes will build on this experience, with the strong possibility that as the Centre grows and evolves, it will become a separate entity within the Seychelles Polytechnic. Through the flexible provision of courses, it will become the hub of distance education provision, offering adapted courses and acting as the local centre for courses offered by overseas providers. 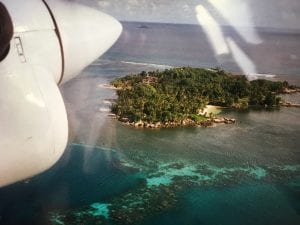 The visit to the ministry wasn’t the end of our visit, as we were lucky enough to have a few days’ holiday before returning to our respective institutions (remember, the plane goes only once a week back to Singapore!). The highlight was a trip to some outlying islands, which involved a flight (at the local fare – tourists have to pay twice as much!) to Praslin followed by a boat trip on to La Digue. 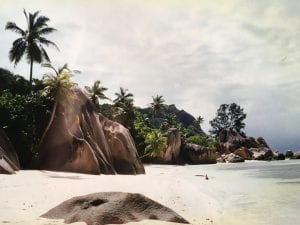 This final destination is a wonderful place, quiet and laid back, with no cars. We hired bikes to get about, visiting the turtles and snorkling (well, swimming with my goggles) in the lagoon at one of the world’s best beaches (Anse Source D’Argent). I’ve chosen the pic judiciously, sparing you the one of me standing on the beach in my Speedos.

But enough of the informal pleasures. What happened subsequent to the submission of our report? It was well received by COL, and we were hopeful it would lead to significant outcomes and the growth of ODL in the Seychelles. Regrettably, as is all too common in such situations, politics intervened. The Minister of Education was replaced a few months later, with the new incumbent having an alternative vision for the future of higher education. It eventually led to the upgrading of the Polytechnic to University status in 2009. It is small (<250 students) and has partnerships with a number of overseas universities.