Mathematica is 25 years old. What may arguably be the best mathematics software was developed by Stephen Wolfram (no doubt with plenty of able helpers). It’s been  a mainstay at most universities in which I’ve worked. I understand it. 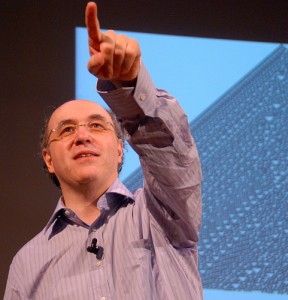 Wolfram|Alpha is 5 years old. It’s a search engine and much more, better able than others like Google for many specific questions (e.g. try ‘How many students are there in [your country]?’ and see which gives the superior response). If you haven’t already done so, try it. It finds solutions by computation rather than searching the web for the answer. I understand it.

Stephen Wolfram has recently announced Wolfram Language, building on the above two innovations. I don’t understand it, but it may just be his most important development.

It’s early days yet, but the reactions are mostly positive, typified by ‘Sentient code: An inside look at Stephen Wolfram’s utterly new insanely ambitious computational paradigm.’ As the article explains, along with combining the powers of Mathematica and Wolfram|Alpha,

Included in the new project is natural language programming — not that a program can be created exclusively with natural language, but that a developer can use some natural language. Also included is a new definition of literally anything in your application — from code to images to results to inputs — as being usable and malleable as a symbolic expression. There’s a whole new level of automation and a completely divergent approach to building a programming language, away from the small, agile core with functionality pushed out to libraries and modules and toward a massive holistic thing which treats data and code as one. And there’s a whole new focus on computation that knows more about the world than the programmer ever could.

No clearer? Yes, there’s something ever so enticing there, and perhaps we need to play with it a while before we come to grips with its power. You can get started peek here.