Back in the late 1970s I decided to go back to university and study more mathematics, as I felt that my brain was dying. I was necessarily employed at the time, so undertook Maths Honours part-time over a couple of years. My favourite subject was Geometry, and I well remember being introduced to Penrose’s tiling of the plane, a discovery (invention?) that had us all in wonderment. Sir Roger Penrose has gone on to be one of the world’s leading scientists, most well known for his work in mathematical physics. I’ve read most of his major popular works, the first that really got to me being The Emperor’s New Mind: Concerning Computers, Minds, and The Laws of Physics. I’m still wending my way through his recent, and more challenging, thousand plus page opus, The Road to Reality: A Complete Guide to the Laws of the Universe, and have not even attempted his latest, apparently rather impenetrable, Cycles of Time: An Extraordinary New View of the Universe. 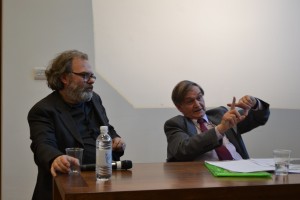 With this background, I was naturally pretty excited to turn up in Oxford and find that my daughter Felicity had bought me a ticket to see my scientific hero in person (looking sprightly at the age of 80). Yes, Penrose was on the programme for the Oxford Literary Festival, in a session called Art and Science: Where the Two Collide. As it turned out, it was more of a collusion than a collision, but no less enthralling for the lack of fireworks. The venue was ‘Christ Church: Blue Boar’ – not a pub by a church, but a lecture hall in an esteemed Oxford College. The other presenter (providing the artistic perspective) was Matthew Collings, whose paintings are ‘based on geometric division and colour relationships’. Unlike my undergraduate days, I sat in the front row. 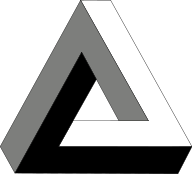 Penrose was a delight to see and hear – he comes across as a warm, humble individual who is still as entranced with his exploration of our universe as he was when playing with geometry back in the 1950s (yes, it was Penrose who re-discovered and popularised the ‘impossible’ triangle we all know so well). After a couple of ‘taster’ slides on his latest views on the origin of the universe (he claims to have proved there was something before the Big Bang – a controversial view among astrophysicists), he launched into a fascinating series of slides tracing the development of his 1970s’ tiling triumph, starting with a regular pentagon. It’s a brilliant example of the beauty of mathematics, culminating in the pattern which comprises two basic shapes – the ‘kite’ and the ‘dart’ – that cover the plane without ever repeating the tiling pattern (i.e. nonperiodically). 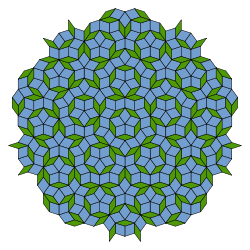 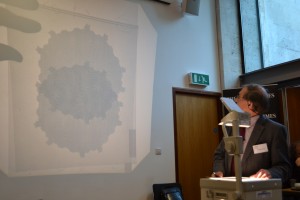 The slides were not presented via the ubiquitous PowerPoint software. Rather, and at first seemingly quaintly, Penrose traced his journey via transparencies on an overhead projector (OHP). Yes, he’s not comfortable with computer-based presentation, but OHPs have abilities that can be harnessed to illustrate points that are far more challenging to produce by computer software (from my limited perspective, anyway). The particular facility of OHPs which Penrose used was to slide and rotate one transparency over another. There were ‘Oohs and aahs’ from the assembled audience as further patterns mysteriously emerged as one tiling passed over another. Somehow it enhanced the credibility of the presentation, as there was no possibility of computer ‘trickery’. Sadly my photo does not capture such a magic moment. 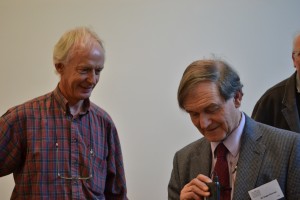 One magic moment (for this blogger) that was captured was a photo of me with the legendary Penrose. This at least partially makes up for my lack of photo from my brief memorable meeting a few years ago with my musical hero, James Taylor. Being in the front row, I was able to get to Sir Roger quickly at the conclusion of the session and ask the person behind me to take a few snaps. He (Penrose, not the photographer) was even familiar with the remote university of my youth, mentioning a colleague who was there around the time of my first foray into higher education.

Such was my brief brush with greatness. It was truly memorable.

One thought on “Of Oxford, Penrose and an OHP”