“Don’t hit her, Dad, she’s about to be published in Nature!”, exclaimed Felicity from the car’s back seat as the errant cyclist, apparently an eminent microbiologist, blithely veered out into the traffic. Yes, we’re back in Oxford, where cars are actively discouraged and bicycles reign supreme. It’s a great time to visit, as the weather has been lovely, the Oxford Literary Festival is on, and (most importantly) Felicity has just presented us with a magnificent grandson. We can also borrow bikes to navigate Oxford more easily and at our leisure. 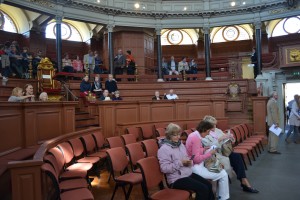 The bikes are great for getting to Festival events, most of which are modestly priced. The first we attended was held in the Sheldonian Theatre, the ‘architectural jewel’ inspired by a Christopher Wren design and built in the late 1600s. It was a fitting setting for The Oxford Debate: Do We Need God to Survive? between A C Grayling and Roger Scruton. The theatre was much fuller than shown here – we arrived early to get a good seat.

It was good fun – the particularly polite protagonists gave of their best, parrying each other’s points and responding fulsomely to the questions from the audience (including myself; I just can’t resist – the essence of my question was ‘Does truth matter?’). For us, Grayling was the clear winner, and not just because we agree with him and he was the more erudite. He spoke with clarity and conviction and appealed to common sense, where Scruton seemed somewhat wary and apologetic, carefully skirting around tricky issues and concentrating on vague, nebulous arguments.

Given my background, I couldn’t help but reflect on the event in terms of its educative value and the use of technology. With respect to the latter, it was by no means seamless. Microphones were used, but within seconds of the chair starting his introduction, there were interjections from the gallery from those unable to hear what was being said. Question time was slightly shambolic, with just one mobile microphone which worked intermittently, and was ferried at a slothful pace by its ancient bearer. As to its educative value, I’m not sure if anyone’s preconceived notions were changed (unlikely, given the nature of the question), but the structure worked well: Scruton and Grayling each spoke for about 15 minutes, followed by mediated questions from the audience and a final short summing up by each presenter. Fundamentally, it was engaging and interactive. Pity it wasn’t (or didn’t appear to be!) recorded.

To finish on a high note, spend a minute to look around inside the Sheldonian – I took the following short video during Grayling’s summing up. And check the people as well as the building, especially the Scottish gentleman in the upper right gallery.

And there’s more, including a speaker I have waited over thirty years to see, but that can wait for my next post.