Blessed is the man who finds no disillusion when he is brought face to face with a revered writer.

Rudyard Kipling interviewed Mark Twain in 1889. This surprising fact was revealed to me as I perused one of the books which emerged when I recently successfully ‘downsized’, moving across the road from a house to a townhouse. It was an opportunity to take stock of my motley collection of books, discarding a few (not as many as I should have), reminding myself to re-read some favourites and planning to read a few unread titles. 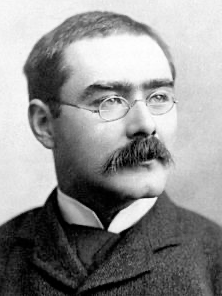 So it was that the previously unread Penguin Book of Interviews included this gem of an interchange between two legendary authors. At the time, Kipling was 33, on his travels from India to the UK via Asia and the United States. As a reader who had ‘learned to love and admire’ Twain, Kipling went to great and strenuous efforts to track him down, as is attested in his beautifully rendered account of their meeting. After some initial fruitless searching across multiple states, including perilous train trips, he arrived in Elmira, New York:

‘He lives out yonder at East Hill,’ said the policeman; ‘three miles from here.’

Then the chase began – in a hired hack, up an awful hill, where sunflowers blossomed by the roadside, and crops waved, and Harper’s Magazine cows stood knee-deep in clover, all ready to be transferred to photogravure. The great man must have been persecuted by outsiders aforetime, and fled up the hill for refuge.

Further interactions and adventures eventually led Kipling to his prey at the house of Twain’s brother-in-law. At this juncture in his tale, Kipling wrote the sentence quoted at the top of this post, following it with:

That was a moment to be remembered; the landing of a twelve-pound salmon was nothing to it. I had hooked Mark Twain, and he was treating me as though under certain circumstances I might be an equal.

Clearly Kipling was enchanted, even by Twain’s voice – ‘the slowest, calmest, levellest voice in all the world’. The interview includes extensive quotes, and I assume that Kipling was skilled at shorthand (not out of the question – I just checked and it was invented in 1837) to record them so accurately (if indeed they are!). 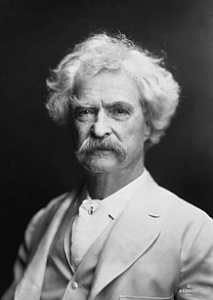 At the time, Mark Twain (Samuel Clemens) was in his early 50s, having published Adventures of Tom Sawyer in the 1870s and The Adventures of Huckleberry Finn about five years before this interview. A section of the interview was devoted to Kipling’s fascination with the character of Tom Sawyer, as this playful interchange reveals:

Growing bold, and feeling that I had a few hundred thousand folk at my back, I demanded whether Tom Sawyer married Judge Thatcher’s daughter and whether we were ever going to hear of Tom Sawyer as a man.

‘ I haven’t decided,’ quoth Mark Twain, getting up, filling his pipe, and walking up and down the room in his slippers. ‘I have a notion of writing the sequel to Tom Sawyer in two ways. In one I would make him rise to great honour and go to Congress, and in the other I should hang him. Then the friends and enemies of the book could take their choice.’

Here I lost my reverence completely, and protested against any theory of the sort, because, to me at least, Tom Sawyer was real.

‘Oh, he is real,’ said Mark Twain. ‘He’s all the boys that I have known or recollect; but that would be a good way of ending the book’; then, turning round, ‘because, when you come to think of it, neither religion, training, nor education avails anything against the force of circumstances that drive a man. Suppose we took the next four and twenty years of Tom Sawyer’s life, and gave a little joggle to the circumstances that controlled him. He would, logically and according to the joggle, turn out a rip or an angel.’

‘Do you believe that, then?’

‘I think so; isn’t it what you call kismet?’

‘Yes; but don’t give him two joggles and show the result, because he isn’t your property anymore. He belongs to us.’

He laughed – a large, wholesome laugh – and this began a dissertation on the rights of a man to do what he liked with his own creations, which being a matter of purely professional interest, I will mercifully omit.

Like me, you probably wish that such dissertation had not been omitted! Also like me, you’d probably rather read the whole interview original form rather than my inadequate précis, but alas, the laws of copyright prohibit such infringement.

While on the topic of copyright, Twain expressed his ire with respect to certain publishers:

‘I remember an unprincipled and formidable publisher. Perhaps he’s dead now. He used to take my short stories – I can’t call it steal or pirate them. It was beyond these things altogether. He took my stories one at a time and made a book of it. If I wrote an essay on dentistry or theology or any little thing of that kind – just an essay that long (he indicated half an inch on his finger), any sort of essay – that publisher would amend and improve my essay.

‘He would get another man to write some more to it or cut it about exactly as his needs required. Then he would publish a book called Dentistry by Mark Twain, that little essay and some other things not mine added. Theology would make another book, and so on. I do not consider that fair. It’s an insult. But he’s dead now, I think. I didn’t kill him.

And more, of course, on the perils of autobiography, the traps of conscience, Twain’s attitude to the constant stream of visitors, his reading habits, etc. Just as we would be, Kipling lamented:

I was burning to ask him all manner of impertinent questions, as to which of his works he himself preferred, and so forth; but, standing in awe of his eyes, I dared not. He spoke on, and I listened, grovelling.

So, if you can get hold of it, read this wonderful tale by Rudyard Kipling, either in the Penguin book I mentioned, or in his From Sea to Sea and Other Sketches, Letters of Travel. I’ll finish by quoting the sentence preceding those entrancing words of Kipling at the start of this blog:

Reading his books, I had striven to get an idea of his personality, and all my preconceived notions were wrong and beneath the reality.

Well, almost the finish. You might wonder what Twain thought of his interchange with the young author. He apparently liked Kipling, saying that ‘Between us, we cover all knowledge; he covers all that can be known and I cover the rest.’

One thought on “When Kipling met Twain”