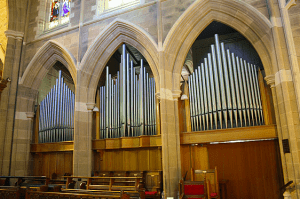 I was introduced to Johann Sebastian Bach as a boy, while a chorister in St David’s Cathedral in Hobart. We were blessed with a world-class organist and choir master, John Nicholls, who knew no greater pleasure than blasting out Bach on the magnificent church organ. As the choir was located close to the organ, we not only received it at full volume, but could feel the vibrations through our feet.

Bach was a favourite of the choir, from the perennial ‘Jesu Joy of Man’s Desiring’ through to a full presentation of St Matthew Passion. I couldn’t wait for the soloists to sit down so that we could get on with the far better (from our perspective) choruses! It ends with the magnificent and spine-tingling chorus ‘In Tears of Grief‘. 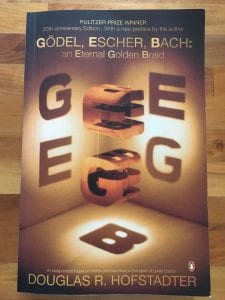 Bach drifted from view for a few years before reappearing dramatically in Douglas Hofstadter’s book Gödel, Escher, Bach: An Eternal Golden Braid (GEB). I’d recently completed studies in mathematics, and was thus intrigued by the enticing interplay of maths, art and music. The complex, enchanting book became an ‘instant classic’, winning the Pulitzer Prize for non-fiction, though it probably ranks as one of those books like Stephen Hawking’s A Brief History of Time, which is one everyone’s bookshelf but practically no-one reads completely. Hofstadter’s is a rather heavier tome than Hawking’s, as it stretches to nearly 800 pages, and should be read in small doses anyway, as it often requires personal contemplation and re-reading total its message in.

I must also admit that there are sections that I struggled with and/or skipped over. Even more significantly, though Hofstadter is a first rate mathematician/physicist, his knowledge of art and music somewhat lags, so it is no surprise that he has been called out by Bach scholars on certain details and assumptions. A recent example is Ilari Kaila, whose article ‘Contrapuntal consciousness‘ includes the following (click on the article link if you want to learn what Hofstadter apparently got wrong):

More than anything, Bach’s name in the title represents a missed opportunity: his music could, in fact, beautifully serve the role that Hofstadter wanted to assign it. Beyond its relevance to recursion, it can help us think about the book’s biggest underlying subject matter, that of meaning – though it might lead us to a very different perspective from the one Hofstadter intended. …

Escher adored Bach, and was aware of the parallels between his own tessellated images and Bach’s mathematically complex polyphonic works. …

Bach’s music can really hammer home that the substrate of meaning is meaning. This is the crux of the paradox that GEBtries, in vain, to solve.

Bach features heavily in the book, and in particular Hofstadter makes reference to and builds on the concept of the ‘crab canon’. In essence, a crab canon is a seemingly simple musical tune which not only sounds pleasant both forwards and backwards, but becomes even more enchanting when played forwards and backwards at the same time! I recently came across a cunningly crafted video which illustrates this phenomenon:

However, even this charming interpretation has its critics, and I must agree, as the video gets bit vague when trying to interpret canon as a Mobius strip. There’s a GEB Wiki, and a contribution on the topic explains in part:

One interesting thing about a Möbius strip is that, when you travel around it by 360 degrees, you end up in the place you started, but upside down. Flipping music upside down — turning all its downward intervals into upward intervals, and vice versa — is an interesting thing to do. It happens in some of the canons in the Musical Offering, which are called “canons by inversion”.

The Crab Canon is not a canon by inversion. It doesn’t ever mirror its theme on the musical scale: it mirrors it in time. This is the difference between flipping a musical staff top to bottom and flipping it left to right. The video creator may have gotten the inspiration for his video by confusing these at some point.So how does the video fit the music onto a Möbius strip? Basically, by ignoring everything that makes it a Möbius strip!

Because there’s nothing about a Möbius strip that would reverse the music in time, the video just starts two cursors going around the strip in opposite directions. This could have been done on a flat image, such as the score above or the one on p. 202 of GEB.

Incidentally, I’m not sure what your image of Bach as a person consists of, but I’d always thought of him as a rather conventional, pudgy, religious person who led a somewhat pious life writing music to reflect his love of the Lord. Well, think again, and reflect on the revelations revealed in a recent article which introduces the rebel Bach. Those who eschewed a commonly conservative viewpoint of him probably didn’t know that

he was imprisoned for a month. They never learned about Bach pulling a knife on a fellow musician during a street fight. They never heard about his drinking exploits—on one two-week trip he billed the church eighteen groschen for beer, enough to purchase eight gallons of it at retail prices—or that his contract with the Duke of Saxony included a provision for tax-free beer from the castle brewery; or that he was accused of consorting with an unknown, unmarried woman in the organ loft; or had a reputation for ignoring assigned duties without explanation or apology. They don’t know about Bach’s sex life: at best a matter of speculation, but what should we conclude from his twenty known children, more than any significant composer in history (a procreative career that has led some to joke with a knowing wink that “Bach’s organ had no stops”), or his second marriage to twenty-year-old singer Anna Magdalena Wilcke, when he was in his late thirties? They don’t know about the constant disciplinary problems Bach caused, or his insolence to students, or the many other ways he found to flout authority. This is the Bach branded as “incorrigible” by the councilors in Leipzig, who grimly documented offense after offense committed by their stubborn and irascible employee.

Let’s round out on a purely positive note, first from Jack Bruce, the legendary bass player and singer from Cream. More than once in interview he extolled the virtues of Bach and the usefulness of learning Bach for aspiring bass players.

When it comes to bass, what I play doesn’t have to be busy or fast, but  it has to be melodic. The earliest example of that is J.S. Bach. He  wrote fabulous bass parts which every bass player should study, because  they perfectly illustrate how to be functional and melodic at the same  time.

It is claimed that Carl Sagan, when he asked his colleagues for suggestions on what audio to include on this Voyager disk, got something like this back from Freeman Dyson (some claim it was Lewis Thomas): “I’d send just Bach … but that would be showing off.”

It’s best to finish by listening to Bach, rather than reading about him. Here’s a modern interpretation of Bach’s Toccata and Fugue in D Minor by the group of master musicians Sky.