Truth be told I was hesitant: should I go to see Canned Heat for their gig in Melbourne? I contacted my old friend Andrew in Hobart, a serious fan of the group (has at least six original vinyls), and he thought it was worth a go. It didn’t look that promising, the venue being the Corner Hotel in Richmond, a location I was aware of having passed it many times on my way to the Richmond Arms Hotel just up the road, usually in preparation for a Super Rugby match at nearby AAMI stadium. Further, though when first announced there were two of the original’s lineup coming, Larry ‘The Mole’ Taylor had to drop out due to cancer treatment. That left us with Fito de la Parra, the legendary drummer, along with long-time replacement members John “JP” Paulus and Dale Spalding. Though it was mentioned during the gig, I didn’t catch the name of the replacement bass player (we suspect it was Randy Resnick). 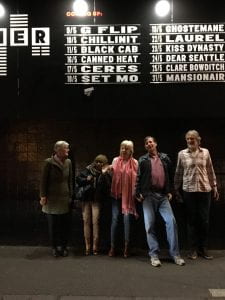 Five of our group outside the venue

Our numbers grew to seven as the event approached, with another old friend John driving down from Canberra. The female contingent made their attendance conditional on having seats, a bit of a problem as it is a standing only venue – a pub dance floor. Nevertheless, I rang the organisers and they agreed to supply a couple of chairs. So we duly turned up on the evening, having primed ourselves with a beer and bite at the aforementioned Richmond Arms Hotel. The bouncers looked pretty calm and serene, happy that the crowd was mostly mature (John made the colourful quip that the crowd looked like the waiting room at a prostate clinic), unlike the patrons for some of the more contemporary groups. The inside of the Corner Hotel was much as you imagine, an ageing and well worn pub concert venue. And, much to my relief, at the far side of the room was a row of eight chairs, two of which with my name on them!

We grabbed a beer and settled in. The opening act, Joe Matera, was competent and calm, providing nearly an hour of singer/guitarist pleasant tunes. But we were all of course there for the one thing – Canned Heat. The curtains quivered as a familiar sound assailed our ears; the opening notes of ‘On the Road Again’. The crowd went wild, the curtains opened, and thus began a glorious evening of familiar blues and boogie. 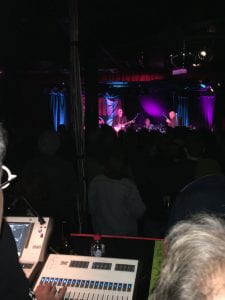 All (well, nearly all) the favourites were played, including Going Up the Country, Bullfrog Blues, Amphetamine Annie, Let’s Work Together, and the marvellous Rollin’ and Tumblin’. And I’m guessing that the slow beguiling bluesy instrumental they did was Cristo Redentor. Fito and Dale shared the MC work, with a few well chosen pithy comments which helped the evening along. They’re a very professional crew, with no panic when JP broke a string and it took too long to locate a new one and replace. No roadie rushing on with replacement guitar, just JP doing his own restringing! Dale carried the commentary, then when it still wasn’t fixed launched into a marvellous harmonica piece, ably joined by Fito and the bass player. JP even had to borrow Dale’s guitar at one stage, and still managed to put in a soaring solo that brought on roars of approval.

My initial worries about the venue were without basis – the Corner Hotel was perfect for the style of music that Canned Heat plays. It’s close, warm and wonderful, with a glorious informality that the band clearly seek and enjoy. They had fun, as did the 400 or so patrons (though Linda did comment that the carpet seemed a bit sticky). Andrew loved it, the highlight of his week in Melbourne (even ahead of the rugby the next night and the surf at Point Leo).

Naturally the evening concluded with an extended boogie number, which I hadn’t heard before but was similar to Fried Hockey Boogie. As with that piece, it included solos from each member, fittingly finished off with a flourish by Fito, still able to display his superb drumming skills. And of course the final line was “and don’t forget to boogie”.

One thought on “Canned Heat – faithful to the legacy”