It’s been nearly a decade since I mentioned the Observatory on Borderless Higher Education (OBHE), which I’ve only just added to my list of links. It’s a UK-based ‘think tank’ which aims to “provide strategic intelligence for education leaders and policymakers attempting to navigate the opportunities and threats of borderless 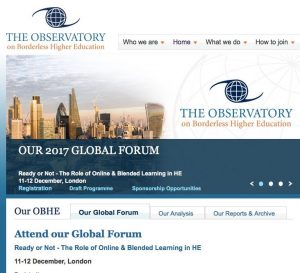 higher education.” That rather less-than-stimulating stated purpose belies its value, as it provides range of resources with the potential to help a range of individuals and organisations involved in ODL. The only drawback to its universal usefulness is that it requires subscription to access the bulk of its resources – not a problem if you belong to one of its 160 or so institutional subscribers, of course.

The OBHE recently came to mind when I was chasing down a publication. Back in 2003, while working at the Open University of Hong Kong, I was approached to write a commissioned report for them addressing the issue of online learning in Asia. My colleagues (Wei-yuan Zhang and Kirk Perris) and I had an associated project we’d been working on, so the three of us prepared the report and reaped the reward of a relatively handsome fee (well, being paid anything for a research report is a handsome amount!). 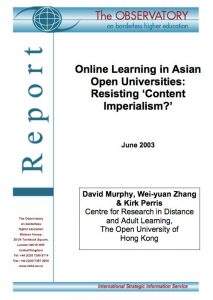 Unfortunately I couldn’t find the report in my old files, so went to the OBHE website to try my luck. Some of its archived material is freely available, and it was a pleasant surprise when I was able to download it without payment (the cost of an individual report can be prohibitive) via this link.

As clearly implied by the title (Online Learning in Asian Open Universities: Resisting ‘Content Imperialism?), the report investigated 12 universities in nine Asian countries, partly to ascertain whether they were suffering from content imperialism, courtesy of their western counterparts.

Based on the data we collected, we concluded that:

Overall, the impression gleaned from research results such as those given here is that Asian countries and institutions are not sitting idly by watching western e- learning institutions and corporations invade their turf, but are actively and successfully engaging with online learning on their own terms. They are experiencing many of the same difficulties as their western counterparts, and in some cases have learned from their experiences and thus been able to move very rapidly by ‘leapfrogging’ into advanced use of information and communication technologies. The fears of some commentators concerning the negative impact in Asia of western ‘global’ e-learning providers appear to be thus far unfounded, as Asia is clearly not ‘easy pickings’. The prospect of ‘content imperialism’ (Farrell, 2001) is thankfully diminishing, as Asian providers have responded rapidly to the challenge of ensuring rapid growth in higher education in this and coming decades.

So, given my success at accessing this report, search the site and see what you can find and download. And it’s not just reports: you’ll find other publications, as well as current news worldwide in higher education and alerts to conferences and events (including their own).