The rise and rise of the ‘openness’ movement in education is well documented, having gained momentum in the last few decades through open learning, open educational resources and other associated areas of endeavour. A particular hotbed of continual debate and conflict is the area of open publishing, well documented in Martin Weller’s The Battle For Open (2014).

The conflict is anything but surprising, given that

Generating profits for publishers and shareholders should be seen as a side effect of providing a useful service, but it should not be a goal. The goal is to effectively disseminate research. (Weller, p. 56)

A simple graph illustrates the progress that’s been made in open publishing:

Open access journals and articles. Source: reprinted in Weller (2014) under a CC-BY license.

Note that the graph has data points only until 2009. It would be interesting to see how the pattern has gone in the last five years. An indication is provided in a graph by Michael Eisen in his blog (he isn’t sure about the weird 2009 data): 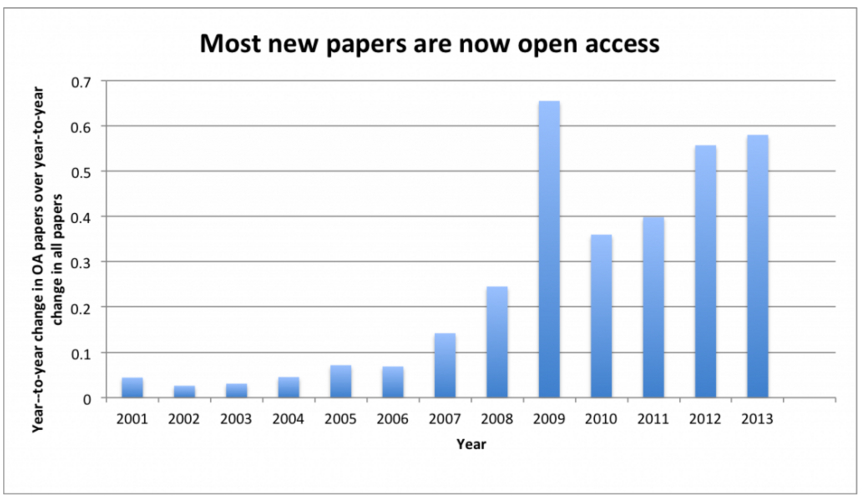 The battle rages and progress is of course anything but smooth. As Weller summarises after presenting well-founded arguments for openness in publishing academic work:

The combination of these practical and ethical arguments has made the existing practices and profits of academic publishers increasingly difficult to justify and maintain. As we shall see with other aspects of openness, the argument becomes irresistible. This is when the real battle for open begins … . (Weller, p. 54)

A newsworthy skirmish has emerged with respect to a particularly powerful publisher, Elsevier. Following some years of expressed disquiet,

In 2012 over 14,000 academics joined a boycott of publisher Elsevier, protesting about their ‘exorbitantly high’ charges and practices, which they saw as limiting the free exchange of knowledge (Cost of Knowledge 2012). In 2013 Elsevier sent ‘take- down notices’ to the academic social media site Academia.edu, demanding that copies of articles that were shared on academic profiles on the site be removed (Taylor 2013b). (Weller, p. 59)

It would have been interesting to eavesdrop on the subsequent discussions in the boardroom. 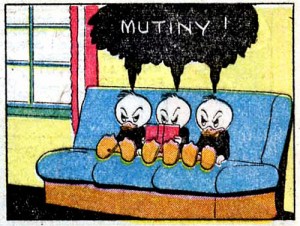 Now amid Elsevier’s half-baked mutterings of change and progress comes a bombshell: Elsevier Mutiny: Cracks Are Widening in the Fortress of Academic Publishing.

Yes, “All six editors and the entire editorial board of the well-respected linguistics journal Lingua resigned en masse last week.” This is a gutsy move, and it is hard to imagine that it’s the end of the battle.

Given that academics are not usually beholden financially to the major publishing corporations, unlike the pharmaceutical industry with its financial tentacles into institutions of medical research, this is one that the academics should win.