Martin Weller makes me tired. He does so much, writes so well, is an encouraging and supporting professional colleague (even at a distance – I’ve never met him in person), and runs great distances (1008 miles in 2014). We knew he’d been writing a new book, as he’d been providing updates and ideas on his blog site, but it’s still exciting to see the finished product: The Battle for Open: How openness won and why it doesn’t feel like a victory. 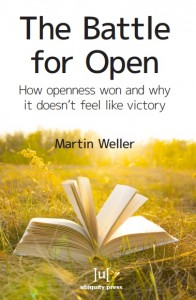 Martin’s book is a ‘must read’ for anyone with even a passing interest in open education, especially those in higher education. The title is intriguing, as I’m sure you’ll agree. He doesn’t go so far as to claim that ‘the battle’s won but the war is lost’, but does make valid and substantiated observations about the muted nature of the victory, the emerging challenges and the looming dangers. As the blurb explains,

openness now has a market value and is subject to new tensions, such as venture capitalists funding MOOC companies. This is a crucial time for determining the future direction of open education.

Multiple perspectives are explored, principally under the four themes of open access, MOOCs, open education resources and open scholarship (this last one with obvious links and extensions to his previous book). These follow an initial powerful burst on why openness matters, just in case you’re wavering in your interest or commitment to the concept. As Martin argues,

There are two main reasons that openness in education matters: opportunities and function.

… One significant opportunity that openness affords is in the area of pedagogy. … 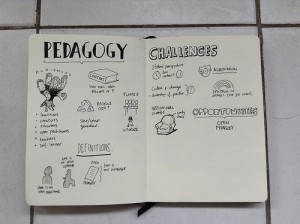 Many of our existing teaching models (the lecture is a good example) are based around the starting assumption of access to knowledge being scarce (hence we gather lots of people in a room to hear an expert speak). Abundant online content changes this assumption. A pedagogy of abundance focuses on content, however, which is an important, but not sole element in the overall approach. Perhaps it is better to talk of a pedagogy of openness. Open pedagogy makes use of open content, such as open educational resources, videos, podcasts, etc., but also places an emphasis on the network and the learner’s connections within this.

… the second reason why openness matters, namely the function, or role, of the university. Universities can be seen as a bundle of different functions: research, teaching, public engagement, policy guidance and incubators for ideas and businesses. In times of financial downturn, every aspect of society is examined for its contribution versus its cost, and the higher education sector is no exception. Increasingly, the narrative is one of a straightforward investment transaction – students pay a certain fee, and in return they receive an education that will allow them to earn more money later in life (e.g. Buchanan 2013).

While this is certainly a defensible and logical perspective for many to take, it ignores or downplays other contributions. Open approaches to the dissemination of research, sharing of teaching resources and online access to conferences and seminars helps to reinforce the broader role of the university.

I’m quoting this at length for the two reasons that it is important and I couldn’t write it any better. And I’m also struggling to choose which bits to tell you more about and quote: it’s all relevant, well-researched and argued and provides fertile ground for ongoing discussion and debate. You researchers will find gold (including discussion of the Gold Route) in Chapter 3: Open Access Publishing, while the instructional designers will do likewise in Chapter 4: Open Educational Resources (whatever happened to ‘learning objects’?!). 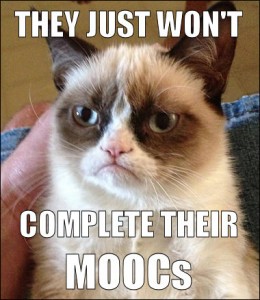 Some may view the chapter on MOOCs (Chapter 5) as the most important and/or topical, but it may be the opposite: MOOCs have come and they will go.

Chapter 6 takes us to a parallel ongoing battle: the exasperatingly tired notion of ‘education is broken’ and the dubious ‘Silicon Valley Narrative’. Open Scholarship (Chapter 7) returns to substantive and longer-term considerations of the role of the academic. You don’t have to have read Martin’s previous book on this topic, though it helps!

The final three chapters address the overall argument, first through ‘Openness Uncovered’ (Chapter 8). Here’ll you’ll come to a better understanding of the politics and problems of openness, and enjoy the figure from p. 157 showing a history of Openness (from authors who made it open, using a CC-BY licence). 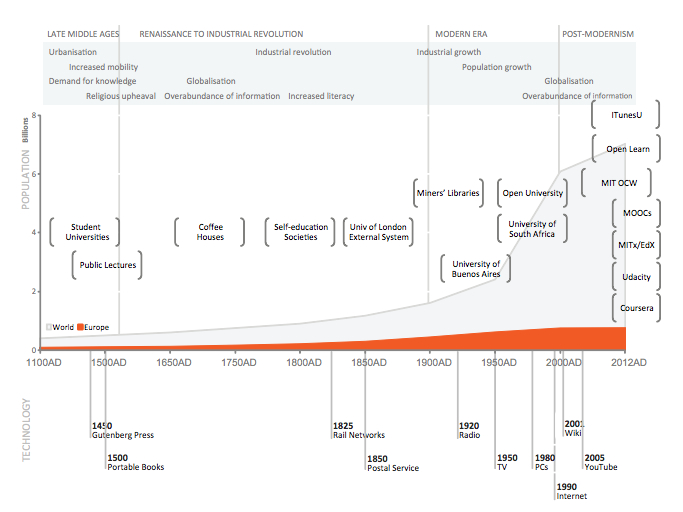 Chapter 9 extends ideas presented earlier in Martin’s aforementioned The Digital Scholar, applying the notion of resilience (from ecology) to address challenges faced by higher education. It makes for fascinating reading for those of us who enjoy viewing issues through a fresh conceptual lens. Not surprisingly, Chapter 10 ties it all together (pretty neatly!), so I’ll leave the last word to Martin:

The victory of open education, then, is that it is now a serious contender, proposed by more than just its devoted acolytes as a method for any number of higher education initiatives, be they in research, teaching or public engagement. This transition is at the heart of this book, since inherent in it are opportunities and challenges, just as a small start- up business must face a whole different set of issues when it grows and becomes a larger multi- national corporation. In this transition there are many potential pitfalls – the whole enterprise can fail, it can be taken over by others or the fundamental value and identity that characterised that embryonic stage can be lost.