‘What Paris Message?’, you may ask.

Well, in June 2015, the Global High Level Policy Forum (UNESCO/ICDE) issued a “call for governments, higher education leaders, academic staff and students to take action now.” The document is titled Online, Open and Flexible Higher Education for the Future We Want, and presents 15 specific aims for practitioners at a variety of levels.

It’s less than three pages: read it yourself.

All worthy aims, I’m sure you’ll agree. It also integrates with existing accepted resolutions, such as UN Sustainable Development Goal 4: “ensure inclusive and equitable quality education and promote lifelong learning opportunities for all by 2030”. 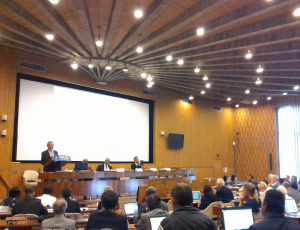 As UNESCO reported it, the “aim of the forum was to build on the Bali message, Incheon Declaration and Qingdao Declaration to turn statements into actions to ensure equity, access, and quality learning outcomes. In particular, this was to respond to the scale and urgency of need for higher education in the period 2015 to 2030 due to the expected massive growth of the number of students. The purpose was to develop the Paris message – a clear set of actions for the participants to commit to and take back to their countries.”

So who will read the Paris Message and to what effect? When I first perused it, I worried that this was just another motherhood statement that will be shelved and ignored. But that is the wrong response, as I realised on further reflection.

First, there will be follow-up activity, principally a planned follow-up Forum in Durban in October (alongside the 26th ICDE WOrld Conference). More importantly, it’s worth recalling the old adage that ‘plans are worthless, but planning is everything’ (Eisenhower). About 150 people from 50 countries, most influential senior officials and policy-makers, have spent time together discussing matters related to the future of ODL. Issues have been debated, alliances forged, arguments resolved and friendships made. Alongside the resultant message, no doubt specific projects between and among countries have been mooted and championed.

Clues that such projects are emerging are found in the Paris Message, such as the specific mention of doctoral student programmes. Representatives from universities may have already agreed on exchange and similar programs across national borders.

And you may just be able to use it yourself. For example, if you are in an educational development unit in a university which is seeking support for the development of OER, quote and reference it in your submissions. As the Paris Message contends, academic staff should:

Be encouraged to create, develop, adapt and share high-quality accessible digital resources, taking into account local needs and diversity of learners. Continued and enhanced access to a growing inventory of quality OER represents a cornerstone for online, open and flexible learning worldwide.

I’m thus a supporter. So should you be.