As previously admitted, I’m an unapologetic fan of the Commonwealth of Learning (COL). I also declare interest, in that I’ve worked for COL on a number of projects over many years, encompassing the reigns of three Presidents (Dhanarajan, Daniel and Kanwar).

So it is unsurprising that I always have at least a quick peruse of COL’s regular news publication, Connections, which highlights major events, people and projects associated with the organisation. A couple of items caught my eye in the latest edition (July 2015, Vol. 20, No. 2) and prompted me to pen this post. Both items brought me pride, but in different ways.

The first made me proud of my country, Australia:

In line with its focus on gender equality and empowering women and girls, the Department of Foreign Affairs and Trade, Australia has made an additional contribution of AUD$500,000 to COL to support skills development among women and girls in Bangladesh, India and Pakistan for a period of one year. 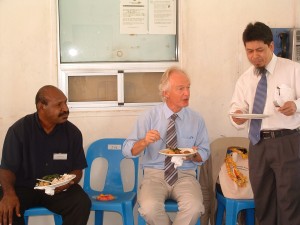 Why did we feel the need to wear ties?

This has special significance, as in 2008, when attending a PNG conference on ODL, I learned to my dismay from Sir John Daniel that Australia had ceased all funding support to COL. It took some years and the sustained efforts of some worthy Australians for this travesty to be corrected.

The second sparked personal pride, when I read the following:

COL’s eLearning for International Organisations (eLIO) is a fee-for-service programme that customises eLearning solutions to address the specific needs of international organisations. Its award-winning Writing Effectively series has been used by eight United Nations, and three UN-affiliated international agencies.

You see, I was the course designer for the first Writing Effectively course:

The Writing Effectively series was first developed in 2000 for UNHCR, the UN Refugee Agency, and since then has been customized in English and French to numerous international agencies such as UNICEF, WHO, ILO, World Bank and the Council of Europe.  It focuses on the principles and strategies that underpin successful workplace communication: clarity of purpose, audience focus and context appropriateness. These principles are explored in a variety of practice activities and applied through a number of practical work-based tasks that need to be performed to a specific standard. Each participant is assigned an e-tutor who acts as a personal guide throughout the course.  All staff who write general office correspondence, reports, proposals etc. can benefit from this eLearning series.  The courses in this series are modular in format and participants select the module most relevant to their needs at the workplace.

It all started in 1998. I was fortuitously visiting COL at the time when Raj (Prof. Dhanarajan, as he is popularly known) was putting together a team to bid for the project with UNHCR. I was on my way to a conference in the UK, and Raj asked to me make a detour to Geneva to talk to the UNHCR team – it seemed that COL was on the final short-list of three bidders, the other two being universities. The visit was very enjoyable: the UNHCR people were open and friendly, and I was able to inform them of COL’s particular strengths, as well as providing feedback on their existing course (an expensive in-house training course). The head of the UNHCR training group had the vision and foresight to see the potential of ODL for the training of remotely-located staff.

A few months later we received the good news – COL had won the contract, its first with the major international agencies. I wasn’t involved in the planning documentation, but it was both thorough and smart, reflecting COL’s superior knowledge of and experience with ODL. The team leader was the mightily effective Angela Kwan, well known to me from my time at OUHK. Amongst other activities, the highly talented course writer (Maree Bentley) and I were despatched to both UNHCR headquarters in Geneva and to country posts to gather source material. This was a vital task, as if our course was to be successful, it had to be based on real reports and reporting requirements. We met with a variety of staff, including those writing reports as well as those who received them. After this exercise, we left for home with a stack of papers at least a metre high.

The course development process took a few months, and was characterised by its smoothness. With a few minor hiccups, the course modules were drafted, sent for feedback from the COL and UNHCR teams, and modified based on their comments. When trialled with a small contingent of participants it was an immediate hit. Such was its subsequent success that it became an exemplar, not only for further courses with UNHCR, but also for amended versions for other international agencies, as revealed in the quote above.

Given the overall high quality of the course materials, the tutoring and course administration, along with its longevity and influence, it probably qualifies as the best ODL course with which I’ve been involved. Yes, the team should be very proud of Writing Successfully.