No, this is not my claim, but that of other more informed persons. I found it in Cedric Villani’s wonderful book (p. 16, if you’re interested). To whom was he referring? His colleague at the École Normale Supérieure in Lyons, Étienne Ghys, who counts among his fans the (probably) best mathematician in the world, Terence Tao (he’s up there, with a Fields Medal, and he’s Australian – good enough for me). Terry writes about …

a particularly beautiful plenary lecture given by Étienne Ghys on “Knots and dynamics“. His talk was not only very clear and fascinating, but he also made a superb use of the computer, in particular using well-timed videos and images (developed in collaboration with Jos Leys) to illustrate key ideas and concepts very effectively. … To give you some idea of how good the talk was, Étienne ended up running over time by about fifteen minutes or so; and yet, in an audience of over a thousand, only a handful of people actually left before the end. … I of course cannot replicate Étienne’s remarkable lecture style, but I can at least present the beautiful mathematics he discussed.

Now I haven’t been able to locate this particular lecture for you, but I have found at least a couple of lectures that Étienne has delivered in English (there’s many more in French, of course!). Here’s an eminently engaging one, for both mathematicians and non-mathematicians, on ‘Inner Simplicity vs. Outer Simplicity’:

If you want more, there’s another on ‘When Mathematicians Use Geometry to Cut Cloth‘, though you’ll have to get past the interminable introductions to get to the lecture!

So if you’re interested in teaching, mathematics and technology (or any one of these three), investigate Étienne yourself through his website, or go direct to one of the remarkable online resources he’s developed (with able collaborators). With my long-term interest in chaos and complexity, my favourite is Chaos: A Mathematical Adventure: “a math movie with nine 13-minute chapters. It is a film about dynamical systems, the butterfly effect and chaos theory, intended for a wide audience.” Go on watch it – it’s wonderful! 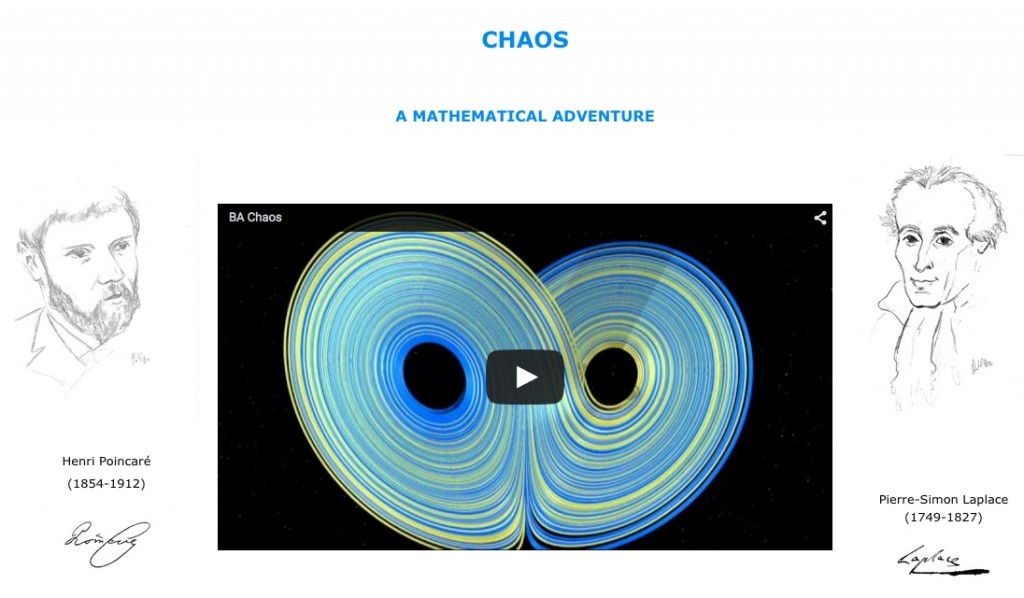