I’m an atheist. Now many spiritual people believe that atheists are seldom totally committed, and I’ll admit that I harbour one lingering doubt. It’s the existence of Euler’s equation,

If god exists, she’s a mathematician who loves simplicity and exquisite beauty. Here is an extraordinarily staightforward identity that connects the fundamental operations (addition, multiplication and equality), the two basic counting numbers (zero and one), the base of natural logarithms (e, also known as Euler’s number), the ratio of the circumference and diameter of a circle (pi), and the imaginary number (i, where i2 = −1). The word awesome is despairingly overhyped today, but this is one equation that more than fully qualifies for its use. It’s akin to throwing your alphabet soup in the air and it landing on the bench to spell out the Gettysburg Address. 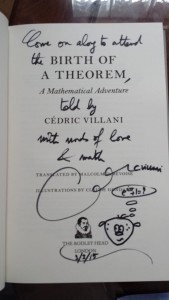 Consequently, it was with much pleasure that I opened my author-signed  copy of Birth of a Theorem: A Mathematical Adventure (check this link – a great review) and saw what he’d written alongside his signature. Yes, along with his jottings was a doodled drawing of someone thinking about Euler’s identity – clearly the author is as much in awe of it as many of the rest of us mortals. And note his use of the word ‘love’: it reminded me of an inaugural lecture given by a professor of pure mathematics, Rudy Lidl, at my university many decades ago, titled ‘Mathematics: My First Love’.

So it’s with great pleasure that I introduce you to a celebrity in the field of mathematics – Cédric Villani.

Already well known in his native France, Cédric is becoming better known in the English-speaking world, and not just for his mathematical skill. He’s a celebrity, and I for one am immensely pleased. He dresses outrageously, is an eccentric and engaging character, and has great presentation skills, making Brian Cox look positively dowdy, shy and introspective. Probably appropriately, he’s been fondly described as the ‘Lady Gaga of French mathematicians‘.

I’ve started the book and thus far love it (there’s that word again). It tells the story of how Cédric came to make his most famous mathematical contribution, concerning the rather wonderful (and useful!) Boltzmann Equation. No, you don’t require knowledge of higher mathematics to understand the book – yes, it contains discussions of mathematics, but is essentially a diary of the thought processes of mathematicians.

Alright, I accept that you may not quite share my unbridled enthusiasm, but at least have a look at his recent presentation in the UK:

As the book reviewer from New Scientist noted:

The book opens like a film noir, as Villani sits sprawling in his office with intellectual partner Clément Mouhot. The pair are wrestling with a tricky case – not a murder, but the intricate properties of the Boltzmann equation, a statistical description of how particles in a gas behave.

In a tumble of dialogue they bat about phrases like “modulo minimal regularity bounds” and “Moser-style iteration scheme” – essentially incomprehensible to the average reader, but they sweep you along for the ride.

Initially, it’s a refreshing alternative to most pop-maths books, which understandably make every effort to hold your hand as they guide you through tricky concepts. Instead, Villani pours you inside his mind and swirls you around, leaving you with nothing to hold on to and breathlessly wondering what you’ll encounter next.

Cédric the celebrity – has a nice ring to it.

One thought on “Cédric Villani, mathematics celebrity – how wonderful!”