I thought it was dead. No, it’s spluttered back to life, and let’s hope it keeps breathing, for Open Praxis should be part of our open and distance learning landscape. 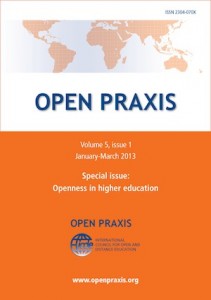 ‘What is Open Praxis, anyway?’, I hear you ask. Well, it started life as an informal bulletin for members of the International Council for Open and Distance Learning (ICDE) and lurched along sporadically for many years. More recently, during the turbulence at ICDE (now safely and happily behind us), it disappeared, but while trawling my links I discovered to my joy that it was up and running again, albeit in a more formal guise:

“This special issue devoted to openness in higher education is the first one in a new stage in the history of Open Praxis. This ICDE publication has been relaunched as a scientific peer-reviewed journal in 2012, and the decision of dedicating the first issue to this topic is not casual.” (Dr. Inés Gil-Jaurena, Editor)

One of the reasons I’m so aware of its previous incarnations is that I had a couple of articles (I use the term loosely) published in Open Praxis a few (quite a few) years ago. From memory, it was Marion Croft (genial President of ICDE at the time) who inveigled me to write ‘A Week in the Life of David Murphy’ and, to my shame, I still have a copy of said piece. That was back in 1993 (in Volume 2 – it’s taken 20 years to get to Volume 5!), and there was another contribution in 2000 called ‘ Still muddling through …’. I’m sure it was much better, but I can’t find it in my battered collection. 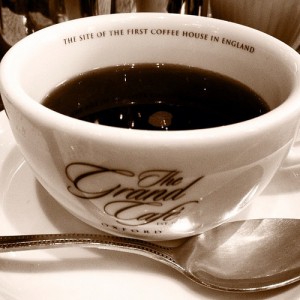 The Grand Cafe in High St, Oxford, claims to be the oldest coffee house in England (1650). It’s a bit expensive – for something better, try the vault cafe in the Church of St Mary across the road, or The Missing Bean  in Turl Street .

As mentioned, the first issue of the reissued journal is appropriately devoted to ‘openness’, and if the ones I’ve perused are anything to go by, the articles constitute an impressive array of knowledge on the topic. I thought I knew everything about the history of open learning, but the first article (On the role of openness in education: A historical reconstruction) disabused me of this naïve notion with a fascinating tale that included discussion of 17th century coffee houses. So read it and be prepared to learn from Sandra Peter and Markus Deimann.

Hint: download the full issue rather than each article one at a time – it’s a bit clunky that way.

Having contributed in the past to the discussion of openness in education, I had held out a vague hope that my work might be referenced. Sadly I was mistaken:  ‘A synthesis of open, distance and student-centred learning’ by David Kember and David Murphy (1990: Open Learning, 5, 2, pp. 3-8) was not included in the rich historical account. David and I were pretty pleased with that effort, as we attempted to wrest the discussion of openness from the sociologists, who had made much of its meaning incomprehensible (for us non-sociologists, anyway). I well remember us receiving a highly complimentary letter from John Cowan (UKOU Scotland) at the time.

Anyway, I digress. Open Praxis is back, it’s open access (Creative Commons Attribution 3.0 License) and waiting for you. Thank you, ICDE.