I love maths; always have. I remember as a child doing arithmetic in my head (love that 17 times table!) as I went to sleep; my first degrees were in mathematics; and my favourite books (as attested in ‘My Books‘, not about books I’ve authored, but the best of my collection) are about maths, particularly its history. I still have a copy of an essay I wrote on the history of Fermat’s Last Theorem from about 1978 – long before it was finally proved by Andrew Wiles, standing on the shoulders of four hundred years worth of the ablest mathematicians. If I ever were to appear on Mastermind, I think my special topic would be ‘The History of Mathematics’ … unless I go with ‘The Music of James Taylor’, of course. 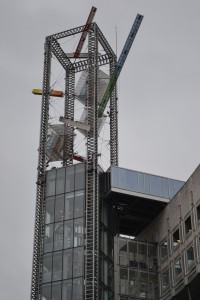 One of Marilyn’s arty snaps – somewhere near Place d’Italie.

Anyway, imagine my excitement when I read in my battered copy of The Mini Rough Guide to Paris (battered because I bought it in an Oxfam shop in Oxford, not from use) on p. 83 that “scarcely noticeable on the end wall of the collonade of no. 36 rue de Vaugirard, is a metre rule, set up during the Revolution to guide the people in the introduction of the new metric system.” We were nearby, so I rushed to find the site while Marilyn dawdled behind taking arty snaps of the streets and the Palais/Jardin du Luxembourg. 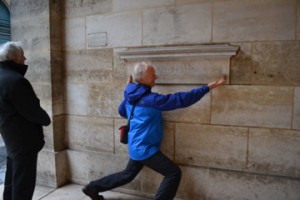 I marvelled at the wall with its piece of mathematical history, until she sidled up and took a few pics, including that shown here. The METRE is made of marble with a bronze ‘bound’ at each end. To add a little more detail, it’s significance is that “France adopted the metre as the official standard length in April 1795 and proceeded to place 16 marble standard ‘metres’ around Paris during 1796/97 so that the people could familiarise themselves with the new measure. This one at 36 rue de Vaugirard is only one of two left today and is the only one at its original place.” (see Unique Places in Paris) You did know, didn’t you, that a metre was originally defined as one ten-millionth of the distance from the North Pole to the Equator? Who needs a bucket list when such delights turn up serendipitously?

So yes we’ve been to Paris again, this time for Marilyn’s birthday, and a much more enjoyable experience it was than when dragging around two children and wondering how we were going to afford to feed them. 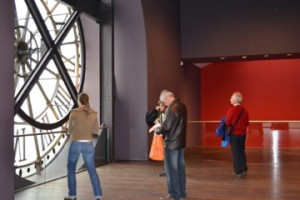 The large clocks are ‘leftovers’ from when the building was a railway station.

A highlight (apart from the metre) was the Musée d’Orsay, with the added delight that as it was December, there was no queue – we just wandered in, paid our 9 Euros and started our tour. We spent most of our time there in the Impressionist halls (après a ludicrously expensive coffee in the cafe on the 5th floor), with Monet naturally the standout. OK, so that’s a bit crass when the likes of Renoir et al. are so well represented … and I must admit my surprise at seeing ‘Whistler’s Mother‘ there. Photos of the paintings are not allowed, though some of the interior can be photographed – naturally we obliged.

Now I mention museums as it gives me the opportunity to announce that there is now a museum of mathematics, MoMath. Those of you who subscribe to Nature will already be aware of this momentous achievement, as the founder of MoMath, Glen Whitney, was interviewed in the issue of 6 September. The museum has produced a series of videos, the introductory one being as shown here, with others having more depth if you’d like to explore further.

Some of the other videos are better – more mathematical, anyway – but the embed codes have been disabled, so I wasn’t able to include them here. I’ve never been to New York, so this have given me another excuse for a visit. It also means that I can’t yet comment on the quality of MoMath and its exhibits, though I am a little concerned that the publicity blurb makes it seem more like a children’s fun park than a museum.

But that’s probably just me being an old fuddy-duddy.