In your journal collection (those of you who still possess such ancient tomes), do you have any first issues? On your shelf, is there a Number 1 from Volume 1 of a journal? I have just one, and you wouldn’t have to guess too hard to know that it’s from Distance Education, launched in Australia some 32 years ago. It was a great start to a great journal, one that has been a stalwart in the field for both new and established researchers and practitioners. I wrote about the issue in one of my first blog posts back in 2008, noting that it contained Des Keegan’s seminal article ‘On defining distance education’, along with the excellent contribution by Snowden and Daniel (yes, that John Daniel), ‘The economics and management of small post-secondary distance education systems’. 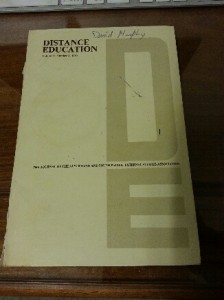 Having made this proud boast, I went upstairs with my trusty (cracked, but still working) new smart phone in hand to take a picture of said journal issue to add to this post. But I can’t find it! I’ve searched all the usual (and unusual) places, and it’s gone. Somewhat bereft, I’ve taken a pic of Volume 1, Number 2, just to prove that I have something close to Number 1.

The contents of Number 2 weren’t too shabby either. These include Malcolm Crick’s helpful ‘Course teams: myth and actuality’ and David Sewart‘s ‘Creating an information base for an individualized support system in distance education’ (yes, there was interest in databases way back then). The Book Review of note is Paul Northcott’s critique (favourable) of Nathan and Henderson’s Using Student Feedback to Improve Learning, one of the best books of the era. It even takes a look back in time, with one of the ‘In Retrospect’ pieces being a tribute to the legendary Malcolm Knowles’ Self-directed Learning: A Guide for Learners and Teachers by the almost-as-famous (at least in ODL circles) Charles (Chuck) Wedemeyer.

Having said all that, is there a point to this meandering tale that has any relevance to the modern reader? Yes indeed, because Distance Education has just made the latest issue available free to all. It’s not too surprising, of course, as it is a special issue devoted to OER (Open Educational Resources) – it would have seemed a little churlish to do otherwise. The Guest Editor is Gráinne Conole, who’s garnered some good articles to provide a current overview of OER and its relationship to social inclusion. As she explains:

“… we are at a point in OER research where we need to move beyond the creation of OER repositories to consideration of how they can be used effectively. … There are not many repositories of good practice; however, despite this research suggests that learners and teachers are now using and repurposing OER extensively (McAndrew et al., 2009). …

The vision behind the OER movement (promoted through organizations such as the Hewlett Foundation and UNESCO) is that making educational resources freely available to all is a fundamental right. The hypothesis is that making OER freely available will lead to their being used more by learners and teachers, as well as being repurposed, hence promulgating good practice. …

However, despite the rhetoric about new social and participatory media generally and OER specifically, the reality is that their uptake and reuse in formal educational contexts has been disappointing. Furthermore, the ever increasing technologically rich learning environment in which today’s learners and teachers are immersed is raising issues in terms of social exclusion; the technological divide might be narrower but it is deeper—those not connected or not using these new technologies are being left behind at an alarming rate.” 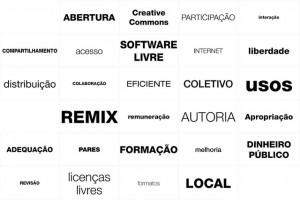 The accompanying articles include one that introduced me to the word ‘glocalization’ (had never heard of it – shows I’m not keeping up with my reading). Julie Willems and Carina Bossu consider ‘Equity considerations for open educational resources in the glocalization of education‘, explaining that “Glocalization—a term first popularized by Lange (Wikipedia, n.d.)—relates to the interplay between local–regional–global interactions. Wellman (2002) specifically employed the term in relation to the overlapping spheres of society, technology, and the World Wide Web.”

There’s plenty of interesting reading to be had, and if you work in a tertiary institution you would certainly want to peruse Don Olcott Jr.’s (must be from the US!) ‘OER perspectives: emerging issues for universities‘. As summed up in the Abstract, “there is no silver bullet solution to the “open” road ahead. Proprietary and open content will coexist in the education sector. OER are not a panacea for resolving all the range of global education issues and divides. OER are, however, a valuable resource that must be developed and sustained. OER may ultimately be the genuine equalizer for education and for empowering social inclusion in a pluralistic, multicultural, and imperfect world.”

Oh well, while you start reading I’ll go back to looking for the lost issue.