1. A room, area, or small establishment where manual or light industrial work is done.

2. An educational seminar or series of meetings emphasizing interaction and exchange of information among a usually small number of participants. (http://www.thefreedictionary.com/workshop)

To put the title more scientifically, the effectiveness of a workshop is inversely proportional to the amount of time dominated by the facilitator. This is my conclusion (and that of many others, I am sure) on reflection concerning the workshops I ran last month. As the quoted definition explains, the emphasis is on the participants, not the facilitator, so the more you can keep out of the way, the better.

This was certainly confirmed by feedback I received, as well as my own perceptions of how the sessions ebbed and flowed. The workshops were on aspects of open and distance learning for a nice-sized group (16) of new staff at Wawasan Open University, and as we settled in to the (constantly rejigged) programme, participants became more and more comfortable with their own contributions and interaction.

Whether it was reporting back on small group discussion (we typically divided into four groups) or individual reports on the finding of resources or summarizing the literature, there was no doubt that these aspects were preferable to me prattling on at any great length. So my aim was to keep my input short and sweet, and get them actively involved at every opportunity. As the workshops were underpinned by extensive basic handbooks, this allowed plenty of time for focus on particular topics, and for FUN! 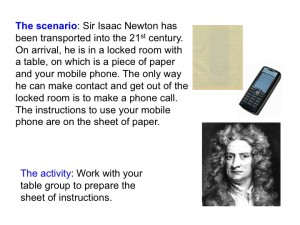 An example of both (focus and fun) was provided by an activity inspired by a job interview technique told to me many years ago by a colleague, Elaine England. Anyway, the activity aimed to introduce the notion and potential challenges of instructional design, and is shown in the slide at the side.

At first this seems pretty trivial, but if given proper time and attention, can provide a quite ‘instructional’ learning experience. A variety of issues can arise, including of course language (what would the word ‘button’ mean to Sir Isaac?) and the use of diagrams (3 of the 4 groups used them). And once all groups had completed the task, a volunteer from each group became Isaac Newton and attempted to follow the instructions of another group, with occasional amusing results. This turned out to be one of the most popular sessions.

Another session which we all enjoyed incorporated some prodding at the leading edge of the literature, a touch of technology, and a generous contribution of an international collaborator. In examining the theoretical underpinnings of ODL, the manuals were fine but of course not current, so it was agreed to investigate the latest emerging notion, that of connectivism. Fortunately, IRRODL had just had a special issue devoted to connectivism, and we approached it by having one or two participants read each of the contributions and report back. That worked all very nicely, but the icing of the cake was the appearance via Skype of the journal’s energetic editor, Terry Anderson. Generously, Terry agreed to join us to chat about his take on connectivism, the special issue, and to answer questions. The half hour or so we shared was informative, fascinating and inspiring – it is unfortunately rare (I suspect) to have the opportunity to engage with the current literature in such a way.

Again, with me tucked out of the way on the sidelines, participants offered a series of lively and stimulating contributions when asked to provide examples of online materials they believed provided effective learning resources. The mixture included some of their own work, examples they find useful in their own teaching and online presentations that are simply inspiring (if you don’t believe me, take a look at 200 Countries, 200 Years, 4 Minutes). I then set myself some homework by incorporating their contributions into Moodle, the use of which was another topic in the programme.

And so it went. I learned a lot. I hope the participants did too. Memo to self – remember Rule 1.

3 thoughts on “Rule 1 for workshop facilitators: Get out of the way!”