With the recent flurry of interest in Cardinal John Henry Newman (don’t tell me you missed his beatification on 19 September – that’s why the Pope made his ill-fated (‘ill-fêted’?) trip to the UK), attention has been given to his warm and entrancing notion of what constitutes a university. Yes, it’s a time for reflection on what was, what’s gone, what’s now and what might be with respect to our tertiary institutions, through reflection on Newman’s lectures on The Idea of a University.

One such scribe who has succumbed to wistful reflection is the philosopher, writer and composer Roger Scruton, whose piece in the Spectator (unsurprisingly titled ‘The Idea of a University‘) includes a tantalising reference to the desirability of distance learning for the restoration of the lost ideals. 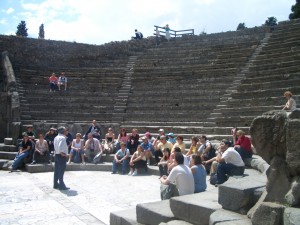 Scruton explains that Newman believed “The university is a society in which the student absorbs the graces and accomplishments of a higher form of life. … the pursuit of truth and the active discussion of its meaning are integrated into a wider culture, in which the ideal of the gentleman is acknowledged as the standard. The gentleman does not merely know things; he is receptive to the tone, the meaning, the lived reality of what he knows. … The university of Newman’s day was a place in which men (and it was then an institution for men only) lived for scholarship, and arranged their lives around the sacrifice that scholarship requires. It was not simply a repository of knowledge. It was a place where work and leisure occurred side by side, shaping each other, and each playing its part in producing the well-formed and graceful personality.”

But times have changed, and “… all is not well with the university today, and parents have little or no guarantee that the vast cost of a university education will be rewarded with a viable product. … Most students now graduate in soft subjects that require ideological conformity rather than intellectual growth, and most spend their leisure hours in ways of which their parents would not approve. … academic freedom is a thing of the past. What is expected of the student in many courses in the humanities and social sciences is ideological conformity, rather than critical appraisal, and censorship has become accepted as a legitimate part of the academic way of life.”

So, what can save the idea of the university? He’s rather late, but Scruton has joined the distance education party. His solution to all that bedevils universities? “I envisage an experiment in ‘distance learning,’ in which students work from home, and attend lectures, receive tutorials, and engage in discussions through Internet connections. As the Internet becomes more interactive, the need for universities to establish themselves in physical space, rather than in cyberspace, is less evident. Virtual communities of scholarship might be more volatile than real communities of scholars. But they will be far more responsive to the demands of their customers, and far cheaper to run. They could provide most of what is provided by a humanities department, with the added advantage of choosing their professors from all over the world, and paying a proper market price for them. First-rate scholars could participate in such a project, knowing that they do not have to share their earnings with the second-rate colleagues who form the solid mass of humanities departments in physical space. And although rehearsals might be difficult, the cyber-university orchestra, when it finally comes together in the two weeks of summer devoted to real meetings in real space, would enjoy a range of talent as great as the National Youth Orchestra.”

One thought on “The Idea of a University: Distance Education!”