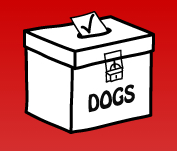 No, it’s not a grammatical error: DOGS (Australian Council for the Defence of Government Schools) is alive and well, and still vigorously pursuing its objectives:

1. The promotion and protection of public education
2. The separation of Church and State and opposition to public funding of private religious schools

The second objective highlights the disparity between Australia and the US/France and other European nations which have managed to keep church and state separate and not get into the kind of shemozzle in which we find ourselves here. We have a messy model not too dissimilar to that in the UK, for obvious historical reasons.

DOGS continued existance came as a mild surprise, as I’d wrongly assumed that it had faded away after the infamous High Court challenge of 1981, during which

Religious men, who claimed that their schools were established to further their particular faith, spent 26 days in a Trial of Facts attempting to prove that they were no more religious than public schools. 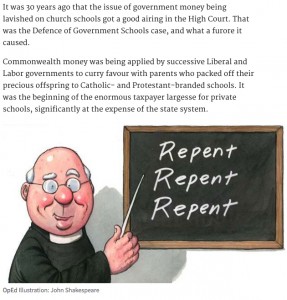 Click to link to an excellent article from the SMH: ‘Religiously follow the rules, or catch church in bed with state’

DOGS didn’t have its day that time, but it came back with a bite to assist in the battle over school chaplains in public schools in 2011, which resulted in a massive government backdown.

Although not an activist, I’ve long agreed with the stated objectives, and watched in horror over the years as the excessive funding of private schools has become so political that all sane and sensible debate has disappeared (e.g. the current stoush over Gonski funding).

DOGS maintains its dogged resistance (pardon the pun) to the creeping inequity in the provision of education through a number of strategies. One is a weekly radio program on the community station 3CR – 855 on the a.m. dial in Melbourne. The hourly program at noon on Saturdays focuses on public education news, and is subsequently podcast.

If you’re interested in public education, at least have a look at their site. It will help you keep abreast with the ongoing battle to maintain support for public schools.