I love my local library: good location, friendly staff and a collection that changes frequently. I’m a regular borrower, not usually more than three books, with the occasional digression into CDs or even more seldom, a DVD. What more could I need?

During a recent visit I spied an enticing title: Martin Amis’s Lionel Asbo: State of England, recently published with mixed reviews. Tucking it under my arm, I headed for the checkout (I know, you don’t use that term for a library), only to spy an interesting looking title in the recent acquisitions shelf: Will Self’s Umbrella. It shouldn’t have influenced me, of course, but I was partly motivated by the small print at the bottom of the cover which alerted me to the fact that it was nominated for the Man Booker Prize in 2012.

Let me deal with Umbrella first: it’s unreadable. No, more correctly, I found it unreadable – a hodge-podge of ‘stream of consciousness’ (or more likely unconsciousness) babbling that found me unable to get past the first couple of pages. Just in case, I flipped open a page about two-thirds of the way through the book and it was the same, like some crazed attempt to take the most challenging of James Joyce to a new and unrivalled (unbridled?) level.

And if you’re wondering (I was, anyway), the judges of the Man Booker Prize in 2012 were Dinah Birch, Amanda Foreman, Dan Stevens and Bharat Tandon, with Sir Peter Stothard in the chair. I’ll leave it to you to find out who won (you might know already, of course). 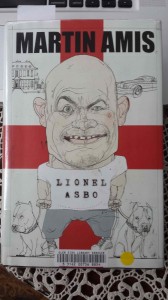 But what about Lionel Asbo? I haven’t read a lot of Martin Amis’s work (nor that of his father, Kingsley), but did quite enjoy The Pregnant Widow and absolutely loved his autobiography, Experience. And I’d glanced at, though not read in details, reviews of Lionel Asbo – apparently the Americans didn’t get it at all.

The book’s central character, Lionel Asbo, is a small-time, violent and thoroughly unlikeable criminal. The story traces his history during a period when he wins a vast amount of money in the lottery. He becomes a national celebrity, despite his loathsomeness, and it is this aspect that Amis uses to make his point about the dire ‘state of England’.

But is that it? Well, perhaps not. The story of Lionel is in some ways secondary to the main plot, which is essentially the growing and threatening tension between Lionel and his disappointingly studious and non-violent nephew, Des. What is the nature of the tension? Well, at the age of 15, Des had it off with his gran (aged 39), Lionel’s mum. As the book progresses, both Des and the reader appreciate just how much trouble he’ll be in if Lionel ever finds out. The pitbulls pictured on the cover are clearly going to feature in some kind of showdown, and … I’ll stop there, before I give too much of a spoiler.

This inadequate description should not put you off. Amis writes with wit and style. It’s a glorious parody, a fantasy, a fairytale that is rooted in almost believable modern life. It’s a rollicking good yarn, with humour, pathos and a riotous plot. Read it.

Now if I haven’t convinced you, then try Jonathan Cape’s 600-word Digested read of the novel. And if you wonder where the surname Asbo comes from, at the age of 18 Lionel changed it by deedpoll from Pepperdine – Asbo stands for Anti-Social Behaviour Order, Lionel being the youngest recipient thereof.