It has just occurred to me that in all my previous posts, I’ve seldom written about, nor mentioned, Stephen Downes, “the world’s most consistent and interesting blogger on online learning” (at least according to Tony Bates, anyway). Yes, his site is on my link list at the right, and I browse his latest contributions from time to time, but he doesn’t feature strongly here at all. 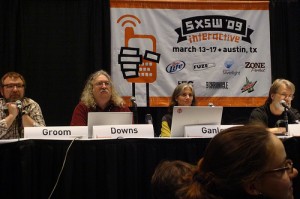 You’d think the conference organisers would at least spell his name correctly!

Note that I initially wrote ‘never’ rather than ‘seldom’ in the first sentence, but when I checked found that I’d referred briefly to Stephen at least once. And we all should take notice of him, not just because Tony Bates says so. Go to Stephen’s site and start browsing. Check the archives – they go back to 2001 – and that was a continuation of previous and ongoing work (as you can see from his first post)!

Stephen Downes is, to state the obvious, one of the most well respected thinkers about education and technology that we have the pleasure to read. Martin Weller gets plenty of mention from me, and he too has made his beliefs about Stephen pretty plain. Mid-December he blogged ‘The Best Edtech Book You’ve Never Read Was Published Last Week‘, wherein he explained that he was so impressed with that week’s OLWeekly that he put it all together as a 252 page ‘book’ in PDF format. As Martin further explains, he recognises

the great work Stephen does every week. What I admire about Stephen most is his endurance. I might have had an idea to do this, would have done about three and then given up. Stephen reminds me of an artist who goes in and out of fashion, produces albums of varying interest and quality, but what you come to admire most is their durability and their resolution to keep doing interesting things.

Check Martin’s blog post (link above) if you want to see a pic of Stephen on a steer with huge horns! 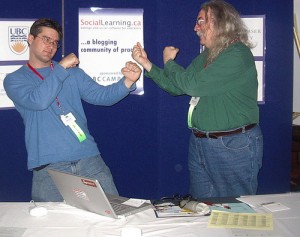 My money’s on the guy on the left, but Stephen seems to have the weight advantage.

Getting back to Tony Bates, it is noted that Stephen has just awarded Tony The Downes Prize 2013 for a blog post and resulting discussion on ‘Discussing design models for hybrid/blended learning and the impact on the campus‘. He’s right, it’s a great piece that stimulates thinking about the relative merits of online and classroom-based learning. The essence of the discussion rests on the key statement by Tony that “The main challenge is how to decide what is best done in class, and what online.” The latter half of the post outlines how the issue was addressed at an instructional design workshop he facilitated.

My own approach to this and related issues (see post from 2009) is to take a step back and examine the learning environment (online, classroom, …) in terms of established principles of good teaching. These are well researched and documented, a favourite being the seven outlined by Chickering and Gamson way back in 1987, and more recently updated by Chickering and Ehrmann in ‘Implementing the Seven Principles: Technology as Lever‘. Essentially, what we need to do is to consider how each principle can be achieved in the given learning environment. For example, how do you ‘communicate high expectations’ in an online environment. Work your way through the list and ascertain how well each of classroom education and online learning achieve good teaching.

Anyway, back to Stephen: get caught up in Stephen’s Web, download his key publications and subscribe to OLWeekly. Now.