When scrabbling around for ideas on a new blog post, I often check the latest offerings of those on my list of links to the right, and good old Terry Anderson has just come up with a cracker. It seems he’d recently spent an evening with the even older (mid-80s) father of distance education, Otto Peters (yes, he coined the term), who had presented Terry with a copy of his latest book: Against the Tide: Critics of Digitalisation.

Published originally in German as the 15th in the Studien und Berichte der Arbeitsstelle Fernstudienforschung der Carl von Ossietzky Universität Oldenburg (I’ll leave the translation to you … or Google), the book comprises 20 portraits of ‘Warners, Sceptics, Scaremongers, Apocalypticists’. As a side note, I couldn’t help but wonder about the word ‘Warners’. It’s not one I’m familiar with (apart from its use as a surname and a film production company), and assume it’s a somewhat clumsy translation of what was in German a better-known and more appropriate word. Somewhat intrigued, I searched the text and found it used only once, with reference to Joseph Weizenbaum on p. 23 in the sentence: “These observations turned him into a serious warner and moraliser.” Not much enlightenment there.

Anyway, as Prof. Peters explains in the Introduction, an admitted aim of the book is:

to plead for a differentiating consideration of this technology, now that the voices of critics have become more numerous and vociferous. Along with the chances of digitalization, soberness and truthfulness demand that its risks be recognised as well, and that they are included in the calculation. These risks will be described and discussed in detail from many aspects. They should be taken note of, reflected on and related to the incomprehensively great chances of digitalization. The challenge for us is to develop forms of living and working in the parallel digital world that is now available, in which the positive facets of digitalization are strengthened and their negative facets are weakened. We should let ourselves be guided by the intention of adhering to perceptions of a humane life. 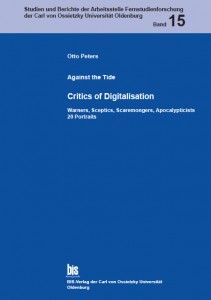 The uninspiring book cover belies the fascination of the contents

The 236 pages comprise the 20 portraits, bookended by the Introduction, a final chapter on ‘Advice from the experts’ (wise words from 10 of the authors on how to reduce the disadvantages and dangers) and an Afterword. And it reads nicely – the translator, Peter McKenna, has done a fine job.

But who comprise the 20? Well, here’s the list of contents, which not only reveals them, but also includes useful labels and encapsulations of their position on digitalization. It’s a goodly mix of familiar and unfamiliar (to me, anyway) names, including the much-mentioned Nicholas Carr, Sherry Turkle, Jean baudrillard and none less than Baroness Greenfield, Professor of Pharmacology (and much more). Incidentally, I must admit to having to check the meaning of ‘dystopist’: dystopia is the opposite of utopia.

1 The heretic: Joseph Weizenbaum  Against the dominance of instrumental reason

3 The nonconformist: Jaron Lanier   The focus is always on people

4 The individualist: Bill Joy   On the ethical responsibility of Internet technicians

6 The traditionalist: David Franklin Noble   A struggle against the “automation of higher education”

8 The alarmist: Andrew Keen   Web 2.0 is destroying our culture!

10 Reformers: John Palfrey and Urs Gasser   How we can master the difficulties of digital change together

11 The humanist: Hartmut von Hentig   Digitalization leans to a “creeping perversion of our life”

12 The satirist: Philip Bethge   “Give us this day our daily Web”

14 The man of letters: Nicholas G. Carr   Are we sacrificing our ability to read thoroughly and think deeply?

15 The debate instigator: Frank Schirrmacher   Help! “We are losing control over our thoughts”

16 The dramatist: Botho Strauß   Digitalization in the world of dreams and mirages

17 The hesitant sceptic: Sherry Turkle   “It’s time to put technology in its place!”

18 The cultural pessimist: Jean Baudrillard   The end of humanity

19 The apocalypticist: Paul Virilio   The slow Agony of planet earth

20 The intellectual gamester: Miriam Meckel   From the corporeal world to the system world

I must admit to not being familiar enough with the field to know who’s been left out, but the scope of the coverage is impressive.

And there you have it. If you seek a publication that summarises the main contributors to resistance to digitalization, your search is over. It’s not a book you have to agree with, but as Terry Anderson (who admittedly disagrees with most of the critics) says, the ” ideas are important and need to be taken critically and seriously”.