A lecture by Benoît B. Mandelbrot, here at my own institution! It was more than two decades ago, but I still recall my excitement when the announcement was made. Somehow and by some means fair or foul, colleagues had managed to entice Mandelbrot, the legendary originator of fractal geometry, to speak to us at Hong Kong Polytechnic University. 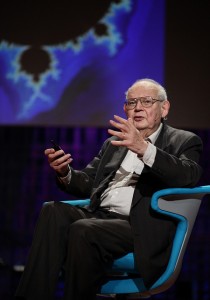 A fairly recent photo. Note the image of the famous Mandelbrot set in the background.

I arrived nice and early for the event, which started more or less on time just after 6:30 pm. The head of department announced the President, Prof. CK Poon, whose job it was to introduce Mandelbrot. It was appropriately handled, but imagine my shock and horror when at the end of his winsome words, the President apologised and let us know he wouldn’t be staying! How insulting was that?! An academic of the highest stature deigns to speak at his university, and he finds something more important to do.

Mandelbrot’s talk was terrific. I’m sure it was the ‘standard’ one he offered for such occasions, but this didn’t diminish my enjoyment in any way. He spoke with conviction tinged with humility, and left enough time for questions at the conclusion (I can’t remember what I asked, but from memory I was first). Apart from the Presidential gaff, it was a highly satisfying evening.

In case you are unaware, he died in late 2010 (Mandelbrot, not Poon). His autobiography, The Fractalist: Memoir of a Scientific Maverick, was completed by his wife Aliette, and the reviews have been recently trickling in. Though acknowledging his prowess and achievements, some are less than wholly laudatory, even the Tablet (A New Read on Jewish Life) magazine (he was Jewish, born in Warsaw, from which his family just managed to escape before WWII). This is reflected in the ‘too clever by half’ title of the piece, ‘A Math Genius’s Sad Calculus‘, and continues with rather harsh judgements such as:

“… reading The Fractalist is rather like reading about a poet who wrote in a foreign language for which no adequate translation is available. You know Mandelbrot is up to exciting things, but you have to take them mostly on faith. What he can share, and does copiously, are the steps of his worldly career: the professorial appointments, the job as a researcher at IBM, the papers published and colleagues courted and impressed. There is so much of this kind of thing in the second half of The Fractalist that it comes to read like an annotated CV, and it has the effect of making Mandelbrot seem very vain.” 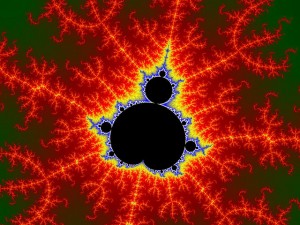 A better view of the Mandelbrot set

If he was vain, then he had good reason for being so: a prodigiously talented student who overcame the travails of his family’s displacement to go on to considerable renown and become the father of fractal geometry.

It was my interest in chaos theory (applied in my doctoral thesis, but that’s another story) in the late 1980s that led me to Mandelbrot, marvelling at his richly illustrated Fractal Geometry of Nature. I still remember getting hold of (then quite primitive) software that enabled users to play with the Mandelbrot and Julia sets to generate fractal images. 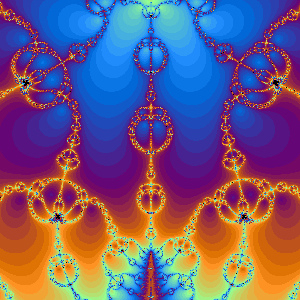 There’s lots of such applications available now, and if you’d like to taste the delights, try some from the useful list at the end of the Wikipedia entry on ‘fractal’. And as you’ll discover unless you’re already familiar with them, part of the joy of fractals is that many natural phenomena (e.g. clouds, leaves, heart beats, river networks and even DNA) exhibit fractal features.

Mandelbrot thus not only made significant contributions to the advancement of mathematics, but also brought great joy to all of us who continue to be entranced by the pleasure of fractals.

You can read a summation of his life from the Economist, but the best final note comprises the words of a friend and colleague, Yale’s Michael Frame:

“The most fun I had with Benoit happened when one of us, usually him,  got an idea for a new direction to explore. Then I saw his mind working  at full speed, at least as full speed as could be managed with the  requirement of speech. We were playing. The same image keeps coming  back to my mind. We were little kids, running through an open field  under a blue sky, curious about every single thing we saw, anxious to  share each surprise with the other. That never again will I answer the  phone and hear, “Hello, Michael. This is Benoit. I was wondering … “ is soul-crushingly sad. A treasured friend is gone. The architect of  a scientific revolution has departed.”

One thought on “I met Mandelbrot … sort of”