A while back I briefly mentioned Edge, heralded as ‘The world’s smartest website’.  While that does not necessarily make it the best website nor my favourite (hard to get past Arts and Letters Daily, though The Browser gives it a push), I like it very much and maintain a watchful eye on its activities and contributions. One regular feature is the ‘annual question‘,which poses an insightful question to which a (large!) number of leading thinkers respond. Previous questions include ‘How is the internet changing the way you think?’ (2010), ‘What scientific concept would improve everyone’s cognitive toolkit?’ (2011) and one I particularly liked, ‘What is your dangerous idea?’ (2006). The responses are on Edge for all to see, and are also published as edited collections if you’d prefer book form. I have a copy of the 2007 edition, ‘What are you optimistic about?’, wherein Steven Pinker gave a taste of his most recent book with his answer ‘The decline of violence’.

This year’s annual question is ‘What is your favorite deep, elegant, or beautiful explanation?’, and there are 192 responses. Most are a few hundred words, with a few a bit longer and some quite short (sometimes trite: Dave Winer’s ‘What time is it?’; and sometimes satisfying: John Naughton’s ‘Flocking behaviour in birds’). The respondents tend to choose their favourite explanation from their own area of research and/or interest, such as psychologist David M. Buss’s ‘Sexual conflict theory’. 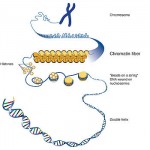 So far (I haven’t read them all!) I’ve been particularly drawn to Helen Fisher’s ‘Epigenetics’, based on the notion that “environmental forces can affect gene behavior, either turning genes on or off.” It’s a relatively new concept, but destined for major advancement and contribution to our understanding of ourselves, both medically and psychologically. Or, as the author puts it, epigenetics is “the most monumental explanation to emerge in the social and biological sciences since Darwin proposed his theories of Natural Selection and Sexual Selection” (itself unsurprisingly more than one respondent’s choice, e.g. Keith Devlin). It’s also one of my son Nick’s areas of expertise, and he’s pretty keen/excited by it – even if it’s only half true that it is “the fundamental process by which nature and nurture interact”.

Given my interest in chaos and complexity (see previous boastful post), I enjoyed Stuart A. Kauffman’s ‘Demonstration that cell types are dynamical attractors.’ It’s early days for this idea, but if it’s true then it will become a major influence on our future understanding of cell behaviour. And it’s not all new explanations – a beauty is ‘Eratosthenes’ measurement of the earth’s circumference’ (Dan Sperber), well over two thousand years ago.

Now the question itself was suggested by the aforementioned Steven Pinker, so I was interested to see his contribution. He likes and provides examples of how ‘Evolutionary genetics explains the conflicts of human social life’, concluding his piece with the statement that “a large number of recurring forms of human conflict fall out of a small number of features of the process that made life possible.”

In the list of 192 names, there’s going to be a least a few we all recognise, and naturally I was drawn to one or two of these. For example, Richard Dawkins mentions Darwin, but knowing that others will choose the famous Charles, he focuses on lesser known work from Charles Darwin’s great-grandson, visual neuroscientist Horace Barlow, who around five decades ago published work on ‘Redundancy reduction and pattern recognition’. Building on the power of Barlow’s work with respect to his own contributions, Dawkins sees further potential, asking “Could we take what Barlow did for neurones in sensory systems, and do a parallel analysis for genes in naturally selected gene pools? Now that would be deep, elegant and beautiful.”

And then there’s the odd ones that catch your eye: ‘Why the Greeks painted red people on black pots’ (Timothy Taylor); ‘The elegant Robert Zajonc’ (Richard Nesbitt); ‘Beauty and tragedy in the mathematics of music’ (Jamshed Bharucha); ‘Sex at your fingertips’ (Simon Baron-Cohen) – see tantalizing pic below; and ‘Feynman’s lifeguard’ (Timo Hannay). Browse the responses – you’ll find something to fascinate you.

[Image credit: Linda Wooldridge and Mathew Clement, in “Resolving the role of prenatal sex steroids in the development of digit ratio”, by John T. Manning, PNAS.] 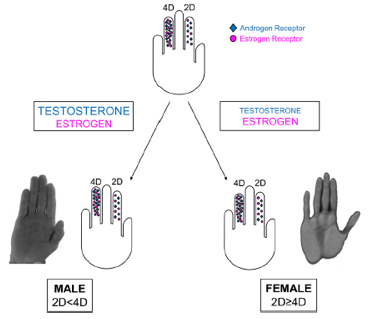