Just got back from 10 days in Penang … I know what you’re thinking, lazy days in the sun, swimming in the hotel pool. Not true! The time there was spent in intense, challenging and ultimately immensely enjoyable workshops, at least from this facilitator’s perspective.

The occasion was a series of ‘capacity-building’ workshops in open and distance learning, sponsored by the IDRC under their Pandora programme, and hosted by Wawasan Open University (WOU). Never heard of it? Well, you should have, or at least you will now – it’s where one of distance education’s most distinguished contributors Gajaraj Dhanarajan (you might know him as ‘Raj) has ended up as Vice-Chancellor, back home after his hugely successful stint as President of the Commonwealth of Learning.

Briefly, WOU is a non-profit university that came into existence through a substantial (to put it mildly) endowment from the Wawasan Education Foundation, itself the legacy of the ‘Grand Old Man of Penang’, Yeap Chor Ee. Part of the gift was the Yeap family’s original home, now restored and the centerpiece of the newly-opened campus in the heart of Penang, along ‘Millionaire’s Row’. Incidentally, the building, which now houses the Chancellory, is affectionately known by staff as the Whitehouse. 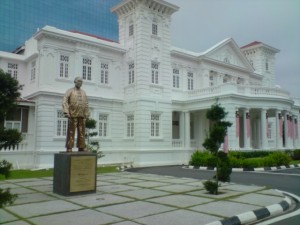 To get back to the point, the workshop participants were from 11 Asian countries, and what a mixed group they comprised – in terms of age (one shares my advanced years, and one is even older!), experience, discipline, context and seniority in their respective organisations. If you’d like to meet (see) at least some of them, have a look at the brief video on YouTube that they produced half-way through the workshop – not a bad effort for three and a half hours’ of activity! 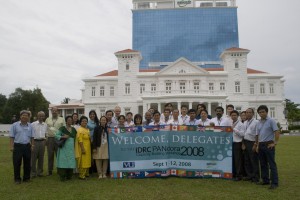 Overseeing our work was Wawsan’s indefatigueable DVC (Academic), Wong Tat Ming, who demonstrated his usual organizational brilliance and ability to respond to unplanned and unexpected ‘hiccups’ (including heavy rain/flooding for Saturday’s tour of Penang). Also highly appreciated and well-received were my fellow facilitators, the ever-colourful Abtar Kaur (from the Open University of Malaysia) and the ever-willing Ng Wai Kong, head of Ed Tech at WOU.

So what else did was achieved, apart from producing a video for YouTube? One of the aims for the participants was to use a template from CoL’s extensive range of resources to produce the essential elements of a course guide for a specific subject of interest to them. And frankly, the output was pretty impressive. 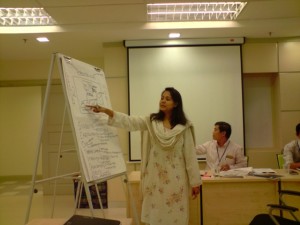 But perhaps even more important was the amount and quality of networking and support that emerged as the workshops progressed. The more experienced participants contributed significantly to discussions and activities, and the young IT-savvy participants were ever-ready to pitch in and help their new colleagues (including me when Murphy’s Law inevitably struck). 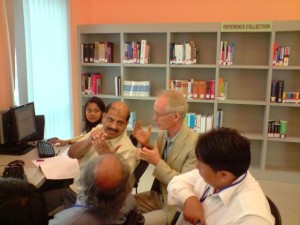 Fundamentally, this group developed a positive and tangible spirit, no more ably illustrated than when someone had money stolen from his hotel room. We’ve all heard of it happening at conferences or workshops from time to time, or even experienced it, and we feel desperately sorry for the hapless recipient of such a crime. But what is perhaps somewhat rarer is the response in this case: a representative of the group had a ‘whip round’ and collected a bulging envelope of Ringitt to at least partially recompense the loss. So from what I observed, the networking that took place will result in fruitful future partnerships across the region.

Finally, a little-known fact (at least by me): Penang was for a period the home of Sun Yat Sen, the late Chinese leader, who spent time there raising funds and plotting his country’s revolution. This historic period from the early 1900s has recently been filmed (“Road to Dawn”), and if you want a copy you can purchase it from WOU – money raised goes to a scholarship fund.

One thought on “A place in Penang”