I’ve thought about writing of my time in Hobart’s Risdon Prison for decades. It was a fascinating and eye-opening experience, and I sorely wish that I’d kept a diary of all the wild tales and shenanigans that went on for six months way back then in 1974. 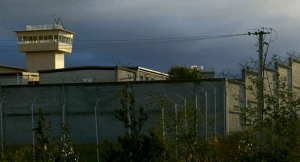 Let’s get one thing out of the way early – no, I was not there as an inmate. It came about when I was a young graduate, newly-married and not sure what to do for a job. What does one do with a degree in mathematics, anyway? You apply for a job with the Tasmanian Public Service, of course. I sat the entrance test and, a month or so later, was offered a position as temporary Clerical Officer, Grade 1, at Her Majesty’s Prison, Risdon. 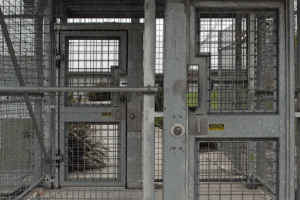 As a young man who had led a relatively sheltered life, it was something of a shock to be thrust into a prison environment. The office was located well within the prison precincts, and even after nearly 50 years I well remember having to pass through five locked and guarded doors to get to my desk in a room with five colleagues, one of whom was a blind telephone switchboard operator. The boss was in an office just along the corridor. I have few memories of the work itself, as it was mostly meaningless paper-pushing. We were for the most part under-worked, and my daily tasks could be completed in about half a working day. I responded by taking a book to work to read during the slack hours, but was chastised for such behaviour and advised to slow down and spread my tasks through the seemingly long hours. And without fail, as the clock approached 5 pm, Bernie K. would announce to all “Oh well, another day, another dollar.”

A prisoner was assigned to work with the office staff, and for most of my time there it was Bob K. He was about 30, a Sydneysider and surfer, who had been arrested while on a cruise ship, travelling with his wife and young daughter. During a customs check of their luggage, $100,000 worth of marijuana was found hidden in its base. His attempt to bribe the customs official was unsuccessful, the outcome being a five-year prison sentence.

Bob was always neat and tidy, and went out of his way to be polite and well-behaved to maximise his chances of parole. The only deviation from this behaviour I observed was the family of mice that he tended in a drawer in his work area. As a play on the Birdman of Alcatraz, we temporarily named him the Ratman of Risdon. He got on well with all the office staff, and an element of his duties was to prepare our lunch, should we require it. So it was a regular occurrence to turn up at work with eggs and bacon ready to be cooked and eaten at our desks – it was just too difficult and time-consuming to go out to lunch. There was a table tennis room for recreation.

I must admit that on occasion I smuggled out letters to his wife on Bob’s behalf. I had little compunction in doing this, as I regularly witnessed one of the staff who scrutinised all inwards and outwards correspondence stop, laugh, and read out to all in sundry something that amused her – even sad ‘dear John’ letters. This particular old bat, Mavis E., had apparently been long associated with athletics as an administrator, and was one of the shameful members of the committee which banned Dawn Fraser from Olympic competition.

Through Bob and others, we were given regular updates on life in Risdon. There was the prisoner who was constantly making half-hearted efforts to escape, as he knew that when released he was to be deported back to his home country in Eastern Europe, something he was keen to avoid. One of his efforts entailed trying to dig a tunnel out of his cell by scraping away with a spoon and other implements at the wall under his bed. He was able to disguise his effort with a mixture of paper and wet detergent. His months of effort came to nought when he was randomly moved to another cell and his handiwork was detected.

And then there was the hapless trio Danny and Badger L., along with Nutty M. While on a bender, they’d had the inspired notion of robbing a bank, which unsurprisingly ended with their apprehension as they sped along the Brooker Highway. Danny was the trio’s brains and leader, and by the time I was there had the privilege of working in the library. It was an excellent appointment, as he took his job seriously, so much so that an errant borrower sustained a broken arm when Danny threw him over a balcony.

Badger and Nutty also fared well, both ending up becoming members of the East Risdon Rural Fire Brigade. These were prize positions in the prison, especially as it meant regular trips outside the walls and even the opportunity to compete in Rural Fire Brigade competitions. These were boozy affairs, and I have it on good authority that towards the end of one such event, two members of the prison team decided to escape, hot-footing it across the fields. Badger and Nutty, realising that if they got away the team would be disbanded, grabbed the keys of the Landrover, chased them down, beat the crap out of them and dragged them back. 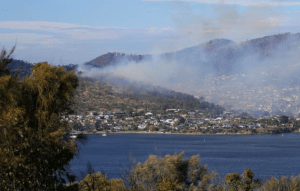 Another reported incident is certainly true, as it ended up in the Mercury, Hobart’s newspaper. The East Risdon Rural Fire Brigade was tasked with clearing and burning bushland on Natone Hill, just behind Marilyn’s parents’ house. In the afternoon the sea breeze up the Derwent River kicked up, with unfortunate effect on the up-to-then controlled burnoff. The group near the blaze radioed Danny to bring the water truck along quick fast, and he duly obliged, with Nutty closely following in the Landrover. All good, except that Natone Hill is of course slopey, and they were on a rough bush track. The top heavy water truck came to grief, rolling down the hill. Poor Nutty also lost control, sending his vehicle rolling down the slope. Both vehicles, with occupants relatively unscathed, ended up against the back fence of Marilyn’s parents’ neighbours. 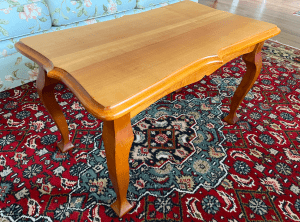 There were other benefits to working at Risdon. As you realise, there’s a variety of work for inmates going on in a prison, an example being the bakery. We had access to the product, which was both excellent and low cost – I seem to remember that I paid 15 cents for a plain white loaf and 20 cents for raisin bread. Vegetables would come in regularly from the prison farm, and I would take home a box of mixed fresh vegetables every week. Prison workshops produced a variety of goods, and I am still the owner of a beautifully made table: constructed of Tasmanian Myrtle and purchased for the princely sum of $8.50. I was told that one or two prison officers managed to have their entire houses furnished with the product of prison labour!

Inmate skills certainly came in handy from time to time. One dopey prison officer managed to lock his car keys in the boot of his car. Dennis C. was famed for his lock-picking abilities and was called in for assistance. He was happy to oblige, but asked that onlookers turned around while he did the deed. In seconds he had the boot open. This was the same Danny who was on hand when the Governor, Daniel Hornibrook, declared the completion of the new prison wire fence. It was fearsome-looking, with overhanging curls of razor wire on extensions to the vertical fence. He challenged the small group of nearby prisoners to see if any would like to try to climb it, with the prize of a packet of tobacco. Danny accepted, and was up and over the fence in a trice, with little personal damage. The Governor paid up. 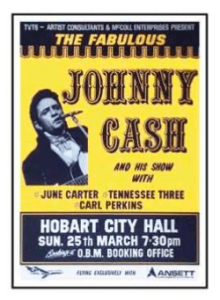 Dennis, like Bob, spent time helping us in the office area, and was a very handy table tennis player (we had a table in a spare room for lunchtime amusement). My game improved immeasurably. A minor career criminal, he was a likeable bloke, and wryly told the tale of a very badly timed arrest. It seemed that Dennis, a country and western music fanatic, had managed to get tickets to the upcoming and much-anticipated Johnny Cash concert at the Hobart City Hall for himself and girlfriend. Imagine his chagrin when he was taken into custody for burglary on 24th March!

Though I got on fine with characters like Bob and Dennis, I must admit to feeling quite nervous and intimidated at times in the prison environment, especially when I had to do errands to other sections, such as the bakery, the laundry or the education section. It was always a process of passing though numerous locked gates and doors, often requiring waiting with inmates for the way to be cleared. Some particularly fearsome-looking individuals were clearly not to be trifled with.

The education section was staffed by a qualified teacher working for the public service. The incumbent was a pleasant ex-primary school teacher, not much older than me. He seems quite successful and innovative, one particular activity being the prison debating club. I never saw them in action, but apparently they were pretty talented, managing to beat some of the visiting debating groups and speaking societies. Unfortunately this particular education officer’s career came to an abrupt end, when he was found to have been pilfering the petty cash to pay off gambling debts accumulated laying snooker at the local Risdon Tavern. He was told that he could resign with immediate effect or face prosecution. He took the sensible course.

Though my work was for the most part pretty tedious, it did briefly becoming more taxing when the paymaster went on holiday and I was given his duties, principally organising the fortnightly pay for all prison staff. On reflection I’m surprised that I was given such responsibility, but was well briefed, particularly on the detailed preparation of a giant spreadsheet to complete the task. With all the different shifts and pay rates  it was challenging, particularly as we were paid in cash, and I had to ensure that there was exactly the correct amount and denominations of banknotes and coins for each person. The details escape me, but the power of the spreadsheet meant that it ‘automatically’ gave not just the correct total of money required, but also the correct numbers of fifties, twenties, tens, etc.

At least it should. I was sweating when payday arrived and the security crew arrived with the large pile of cash. Dennis’ eyes boggled as they placed the pile (something over $10 thousand, as I recall) on my desk. Over the next couple of hours I dolled out the money to the waiting envelopes, and miraculously it worked out exactly. My only error was that I had ordered cash for the prison farm staff, as they usually were paid by cheque.

There was so much more – I wish I could remember …

My six months at Risdon Prison finished when I received an offer of a job at Hobart Technical College, where I’d been teaching part-time. The salary was substantially higher (from about $6000 to $8000 p.a., as I recall) so off I went. Thus endeth my public service career.

2 thoughts on “My six months in Risdon Prison”