A recent insightful online article on hitchhiking led me to think back to my youth, when hitchhiking was just a normal part of one’s teenage years. I grew up under pretty favourable conditions in Hobart, Tasmania, with parents who allowed my sister and I a healthy dose of freedom and independence.

I don’t remember exactly when I started hitchhiking, but certainly have clear memories of at least one lengthy sojourn around Tasmania. At the tender age of 14, Marcus (Toby) Thorp and I decided it was a good idea to take off during the school holidays for a week’s hitching up the east coast and back down the centre. Somehow our parents acquiesced to our request, perhaps aided by the thought that we’d be staying at youth hostels along the way. 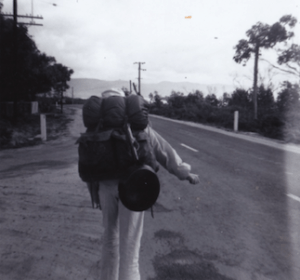 On the road again

What surprises me looking back is that the week before we took off, my mother and I made a batch of alcoholic apple cider, and she sent me off with a couple of bottles neatly packed in my rucksack! So off we went, given a good start by my father driving us out a short way along the Tasman Highway, near Cambridge.

My memory is a little hazy over some of the details, but we easily picked up a ride within half an hour, and were duly deposited in Orford, the first town on the coast. Quite how we got the few kilometres down to Rheban to find the youth hostel I have no idea, but we were soon happily ensconsed as the only guests. A fine time was had by us both, as we got stuck into our food supplies and guzzled the apple cider, imagining ourselves far drunker than we no doubt were.

We headed up the coast to spend a night in Bicheno, before venturing up to the Chain of Lagoons, and heading inland up the famous winding road through Elephant Pass before being dropped off in the middle of nowhere on the Esk Highway (the term was used loosely – it was at least sealed) somewhere between Fingal and Avoca. Then came a hitch which I definitely have clear memories of, as it was the most terrifying we endured. No, we weren’t personally threatened, but the local farmer who picked us up in his Mercedes drove the fastest I’d ever been in a car to that point in my life! We were hanging on for grim death all the way to Launceston, where we were dropped, much relieved to have survived. 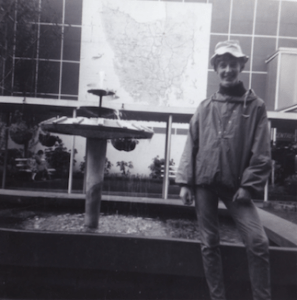 A couple of nights were spent in Launceston at its hostel, by which time were had pretty well run out of food and money and I fancy we got by on bread and bananas. Our visit included, I recall, seeing the monkeys in Launceston City Gardens, which these days are Japanese macaques but back then were Rhesus monkeys.

Finally, the trip back down to Hobart was an easy one, as it’s a straightforward drive down the Midland Highway. 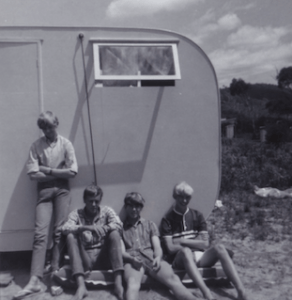 At Bicheno: David Thorp, Peter Morgan, Graham Hibbert and self

And so it continued, and I have no memory of ever being particularly worried or threatened while hitching.

I do recall another longish trip at the end of that year, when a group of us headed up to Bicheno on the East Coast in the summer holiday. Memories that endure include attending a dance, an unnamed member of the group shoplifting ‘girly’ magazines from a shop, and being happily served beer at the Silver Sands pub.

Ah, the carefree joys of youth!