One of the joys of retirement is the time for reading. My reading follows no particular path, comprising a mix of fiction and non-fiction, as I seek out writers who enhance this simple and rewarding pleasure. Authors I’ve enjoyed include David Lodge, Phillip Roth, Amis father and son, Patrick Leigh Fermour, Christopher Hitchins and Hugh Trevor-Roper, plus a few relative ‘unknowns’ who’ve told remarkable stories, such as Carmen Callil (Bad Faith) and Heather Rossiter (Lady Spy, Gentleman Explorer).

And then there’s the classics of literature, an advantage being that most of them can be obtained for free. So I’ve dabbled here and there, selecting snippets all the way from Seneca to P.G. Wodehouse. I’d like to focus on two I’ve particularly enjoyed, Trollope and Turgenev. Now having digested a goodly sample of their work, it occurred to me that they share notable similarities.

First, both inconsequential and irrelevant, note that both names begin with T and have eight syllables. Marginally more significant, they are contemporary 19th century writers. But, and most importantly, they share an inimitable style and approach that captivates the reader and provides a glimpse into 19th century society, unparalleled by other authors. 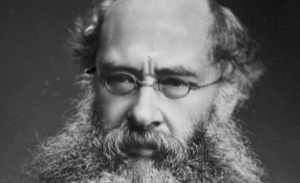 I decided to give Anthony Trollope (1815 – 1882) a try about four years ago. I’d heard of his more popular works, such as The Barchester Chronicles, but thought I’d give something else a go, and settled on The Three Clerks, mostly because it came as a free download from the Gutenberg Project. I was surprisingly captivated by the book; after all, what’s so fascinating about the personal and working lives of three blokes working in a civil service office (especially ‘Weights and Measures’)?! Fundamentally, it wasn’t so much the details of the plot, but the insight that Trollope provides into life in Britain in the mid-1800s (note that Trollope worked in the civil service – he was the most prolific part-time writer of all time, it’s been claimed). It’s insightful and revealing, both at a societal and individual level, as well as being engagingly written. He makes you feel as though you’re there, watching the characters interact and make their way in life. Above all, it’s real.

“There is a plain matter-of-factness about Trollope’s narratives which is convincing, making it difficult for the reader to call himself back to fact and to remember that he has been wandering in a world of fiction.”

“Trollope possessed the rare and beautiful gift of painting the hearts and souls of young girls, …” 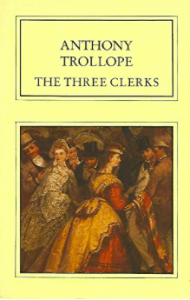 A feature which at first is a tad jolting, but becomes an endearing aspect of Trollope’s writing, is his direct reference to you/me, the reader. Examples include:

“I trust my readers will not be inclined so early in our story to lean heavily on Mrs. Woodward, whom I at once declare to be my own chief favourite in the tale”

“If thou art an elegant reader, unaccustomed to the contamination of pipes and glasses, I owe thee an apology in that thou hast been caused to linger a while among things so unsavoury.”

Even more surprising, in this book at least, Trollope heads off into a diatribe about an issue which enrages him, that of corruption. The particular example he cites is Sir Robert Peel: “a politician without policy, as a statesman without a principle, as a worshipper at the altar of expediency, to whom neither vows sworn to friends, nor declarations made to his country, were in any way binding.” 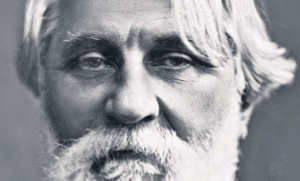 Let’s now turn to Ivan Sergeyevich Turgenev (1818 – 1883), perhaps not as well known as Tolstoy and Dostoevsky, but apparently a superior writer (difficult to confirm, especially for us non-readers of Russian; we have to rely on translations). My first experience of Turgenev was his most famous book, Fathers and Sons (sometimes rendered as Fathers and Children). It’s remarkably compact (at least in comparison to his Russian counterparts) at about 200 pages, and is an entrancing glimpse at Russian life in the mid-1800s. 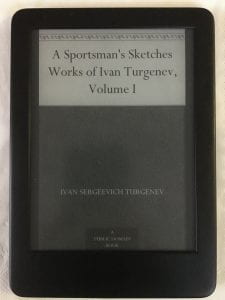 Then a month or so ago I finally succumbed to buying a Kindle, and again fell to downloading a selection of classics. One of my first choices was A Sportsman’s Sketches: Works of Ivan Turgenev, Volume 1, his first major published work. It’s a collection of short stories, based on his exploits while out hunting (hence the ‘sportsman’ title): each story details his encounters and interactions with a variety of persons; fellow landowners, a doctor, wanderers, peasants and assorted workers. Each is vividly told, with intricate details of places, appearances, clothing and habits that transport us to the particular time and place.

A snippet from chapter VII Lgov:

“We had only gone a few paces when a rather wretched-looking setter-dog ran out from behind a bushy willow to meet us, and behind him appeared a man of middle height, in a blue and much-worn greatcoat, a yellow waistcoat, and pantaloons of a nondescript grey colour, hastily tucked into high boots full of holes, with a red handkerchief round his neck, and a single-barrelled gun on his shoulder. While our dogs, with the ordinary Chinese ceremonies peculiar to their species, were sniffing at their new acquaintance, who was obviously ill at ease, held his tail between his legs, dropped his ears back, and kept turning round and round showing his teeth—the stranger approached us, and bowed with extreme civility. He appeared to be about twenty-five; his long dark hair, perfectly saturated with kvas, stood up in stiff tufts, his small brown eyes twinkled genially; his face was bound up in a black handkerchief, as though for toothache; his countenance was all smiles and amiability.”

Turgenev shared with Trollope the endearing trait of directly addressing the reader:

“Allow me, gentle reader, to introduce to you this gentleman.”

“But perhaps the reader is already weary of sitting with me at the Ovsyanikovs’, and so I will become eloquently silent.”

It’s difficult to capture the magic of these two magnificent writers with brief quotes, so all I can finally do is recommend you read their work. 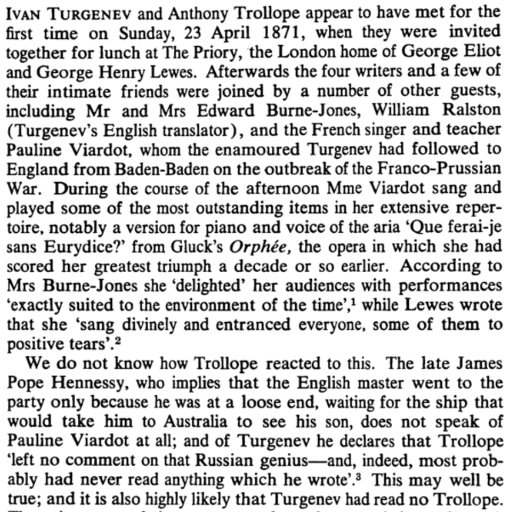 Not quite finally though, as when embarking on this post, I checked to see what links others had observed about Trollope and Turgenev. To my surprise, I discovered that they’d met, albeit briefly. Trollope didn’t travel much, spending most of his life working in England and Ireland, while Turgenev probably spent more time out of Russia than in it, mostly Europe but did visit England. As outlined in the quote opposite, they met at a dinner party, but disappointingly nothing is known of how they got on (or didn’t get on!). So it seems that, when Trollope met Turgenev, it was nothing like when Kipling met Twain!

3 thoughts on “When Trollope met Turgenev”