… we have invaded space with our rocket and for the first time – mark this well – have used space as a bridge between two points on the earth; we have proved rocket propulsion practicable for space travel. To land, sea and air may now be added infinite space as a medium of future inter-continental traffic. This day … is the first of a new era in transportation, that of space travel.

Who said these words, when were they spoken and what was the occasion? 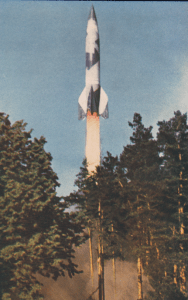 The speaker was Major-General Walter Dornberger, the date was the 3rd October, 1942, and the occasion was the successful launch of the German V2 rocket at Peenemünde, a German municipality. As he continued,

… so long as the war lasts, our most urgent task can only be the rapid perfection of the rocket as a weapon. The development of possibilities we cannot yet envisage will be a peacetime task. Then the first thing will be to find a safe means of landing after the journey through space …

Dornberger, in command of the development, delivered this panegyric during an evening of celebration after the launch, and he quotes it in his fascinating book, unsurprisingly called V2. I was lucky enough to find it in a Opp Shop a few years ago, and recently came back to it for a second read. My copy is a hardback version of the original English translation from 1954.

As I’ve intimated in previous posts, it’s particularly helpful to read first-hand historical accounts and not just rely on commentators and historians. Prominent contributions with respect to the World Wars of the 20th century include Goodbye to All That by Robert Graves, If This Is a Man by Primo Levi, and The Last Days of Hitler by Hugh Trevor-Roper. 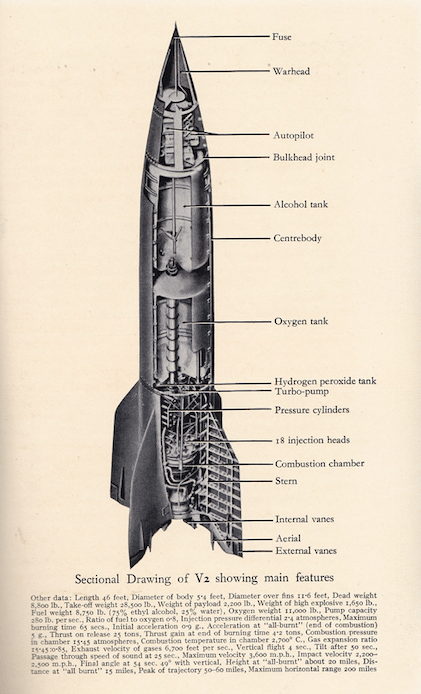 V2 is less well-known than these three, but is an exceptionally important contribution (see Books You Should Read). Not only does it provide detail and background to this major technological breakthrough, but also allows us to glimpse inside the Nazi ‘machine’ and its machinations. It is far less efficient than imagined, and the sheer weirdness of Nazi leaders are revealed as they dither and argue about a project they don’t seem to truly appreciate. This shouldn’t be surprising, of course, as the book was written a few years after the war, and Dornberger can hardly be expected to be extolling the virtues of his masters. For example, when he writes about his first meeting with Heinrich Himmler, “one of the most hated and feared of Hitler’s close associates”, he states:

He looked to me like an intelligent elementary school-teacher, certainly not a man of violence. I could not for the life of me see anything outstanding or extraordinary about this middle-sized, youthfully slender man in grey S.S. uniform. Under a brow of average height two grey-blue eyes looked at me, behind glittering pence-nez, with an air of peaceful interrogation. The trimmed moustache below the straight, well-shaped nose traced a dark line on his unhealthy pale features. The lips were colourless and very thin. Only the inconspicuous, receding chin surprised me. The skin on his neck was flaccid and wrinkled. With a broadening of his constant set smile, faintly mocking and sometimes contemptuous about the corners of the mouth, two rows of excellent white teeth appeared between the thin lips. His slender, pale and almost girlishly soft ands, covered with blue veins, lay motionless on the table throughout our conversation. (p. 172) 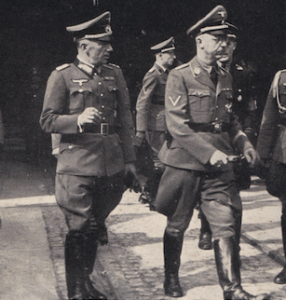 Interestingly, lengthy conversations and challenging interviews are presented word-for-word, prompting the thought that either the author has a prodigious memory, or the meetings were recorded. This includes the meeting with Himmler, wherein he espouses the Nazi doctrine at length.

The book has a strong essence of authenticity, and Dornberger writes quite engagingly, even if substantial portions of the book deal with the multitude of complex technical issues he and his team faced. Which brings us to another point: Dornberger at no time seeks to claim personal credit for the momentous achievement. At all times he stresses the importance of the team effort that it took, never pushing any singular brilliance on his own or anyone else’s part. This includes Wernher von Braun, the name most often associated with the German rocket programme and who went on to be a leader in the USA’s rocket development efforts (as did Dornberger, though less in the limelight). 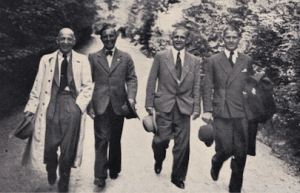 Other members of Dornberger’s ‘Brains Trust’ were Engineer-Colonel Zanssen and Dr W. Thiel. Zanssen, his ‘best friend and closest colleague’, was Commanding Officer of the Peenemünde Army Experimental Station. As they observed the successful launch, Dornberger tells us that Zanssen “was standing there laughing. His eyes were moist. He stretched out his hands to me. I grasped them. Then our emotions ran away with us. We yelled and embraced each other like excited boys.” But it was not all smooth sailing. At one stage Zanssen fell out of favour with the SS, and was relieved of his duties as Commanding Officer. It took fortitude for Dornberger to confront the accusers and have him reinstated. This incident exemplifies the fractious relationship that Dornberger had with the German administration and suppliers to the project. Thiel was in charge of the experimental side of the project, and Dornberger’s high regard for him is exemplified by his description of Thiel’s behaviour at the successful launch:

I can still see Thiel’s face, with his shrewd savant’s eyes sparkling behind his thick spectacles. He was sucking an aged, extinct pipe and his response to my congratulations was a flood of new ideas and suggestions for improvement. He was seen that very same night at his desk, working at reports and observations. He was never still, never rested, and never relaxed. (p. 26)

Wernher von Braun is the best known of the quartet through his post-war fame with US space development. At the time of the successful launch, he was Dornberger’s ‘best man’ at the tender ago of 30. He is the most frequently mentioned figure in the book, and clearly had an exceptionally close working relationship with Dornberger, at a personal (urging him to stay on when tempted to leave) and professional level (intense discussions of technical problems). Like Zanssen, von Braun fell foul of the SS, courtesy of a spy who reported his ‘defeatist’ attitude, and was arrested and imprisoned. Again, Dornberger had to use his skills and influence to have him released. Von Braun also brimmed with ideas, exemplified by Dornberger’s palpable frustration when he wrote:

How many things we had tried to develop and introduce! As early as 1939 von Braun had designed a rocket interceptor capable of rising to a height of 35,000 feet in 60 seconds, to be vertically launched, piloted and remote controlled until it reached the level of the bomber formation to be attacked. I can still see the disdainful smiles on the faces of the Air Ministry officials when our proposal was finally rejected in the autumn of 1941. (p. 242)

The result of a V2 exploding in London

The successful launch of the first rocket into space led to its further development as a weapon of war. From September 1944, more than 3000 V2s were launched against London and other cities (Antwerp and Liege), killing more than 9000 civilians and military personnel.

Did Dornberger ever meet Hitler? Yes, on more than one occasion, the most significant taking place in July 1943, eight months after the first successful launch. Dornberger, Von Braun and another colleague, Dr Steinhoff, ‘head of the mysterious department of Instruments, Guidance and Measurement’, were invited to the Führer’s Headquarters, near Rastenburg in Poland (now more famously known as the ‘Wolf’s Lair‘). The team was well prepared, taking with them film of the launch, “the model of the big launching shelter the Channel coast, the little wooden models of vehicles, the coloured sectional drawings, the organization plans, the manual for field units, the trajectory curves.” 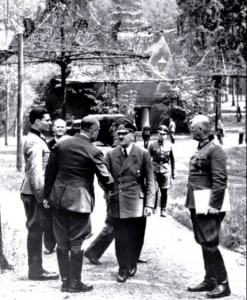 Hitler at the Wolf’s Lair a year later, a few days before the failed assassination attempt

The event makes for fascinating reading. They were taken to the cinema theatre, located in the inner-most prohibited area, where they set up and waited … and waited. Hitler eventually appeared, accompanied by Albert Speer and Wilhelm Keitel (plus others), and he sat between them. Dornberger gave a brief introduction, the lights went down and von Braun narrated as the thrilling film was shown. It included segments showing how easily the rocket could be transported, set up and fired from remote locations. Dornberger then offered further explanations and details while Hitler examined the models and diagrams. He shook Dornberger’s hand, quietly stating “I thank you. Why was it I could not believe in the success of your work? If we had had these rockets in 1939 we should never have had this war …”

The meeting went on for some time, with Hitler arguing for certain modifications (more explosives, different fuel) which Dornberger had to explain were not feasible. He also favoured shelters over motorised rocket batteries, a mistake in Dornberger’s opinion. Overall, what Hitler wanted was a weapon with annihilating effect that would turn the war in his favour. The rocket was a powerful weapon that couldn’t be defended, but had limitations. Nevertheless, the project went ahead with Hitler’s blessing. Hitler’s final words at the end of the meeting were regarded by Dornberger as “the fatefully ironic climax of all our labours up to that time, including all intrigue and other afflictions”:

I have had to apologise to two men only in my life. The first was Field-Marshal von Brauchitsch. I did not listen to him when he told me again and again how important your research was. The second man is yourself. I never believed that your work would be successful. (p. 107) 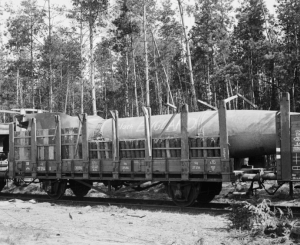 And of course the V2 didn’t win the war for Germany. In the end, as the German empire was overrun, and the Russians captured the complex at Peenemünde, providing them a great start in the yet-to-emerge space race. The US didn’t miss out, having managed to grab plenty of V2 rockets. Even more significantly, they nabbed the engineering/scientific team (Operation Paperclip), with Von Braun considered the person with most potential to stimulate their rocket program (justifiably – he designed the rocket that took the US to the moon). They took a while to get going, partially over investigations into von Braun’s depth of association with the Nazis and the use of slave labour to build the rockets.

So that answers the question. It was Germany, in the midst of war, that sent the first rocket into space. Perhaps that’s why it isn’t particularly well known, due to its association with Nazi Germany, but it is nevertheless true that technological innovation and development often takes place at breakneck speed during times of war (jet engines, radar, electronic communications, etc.).

One thought on “Who sent the first rocket into space?”