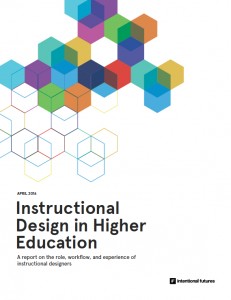 So it was with at least mild interest that I spied ‘Instructional Design in Higher Education: A report on the role, workflow, and experience of instructional designers‘. The report emanates from ‘intentional futures‘, and was funded by the Bill and Melinda Gates Foundation, along with support from a number of key relevant organisations such as Educause. As the introductory blurb explains,

In doing so, they

set out to find answers to these questions to help technology providers and institutions gain a better understanding about how instructional designers are utilized and their potential impact on student success.

So how successful are they in reaching these worthwhile aims? Overall they’ve done a good job, developing an instrument to survey instructional designers from a variety of contexts and countries, though most are from the USA. What did they find?

they are highly qualified;

they do more than design instruction (the four identified categories of their work are design, manage, train and support);

they struggle to collaborate with faculty; and

they are dedicated to learning with technology.

There’s more to it than this of course, making for insightful reading from this admirably short 16-page report. The sections include roles, tools and professional development, as well as the instructive page on ‘Barriers to success’. And there’s a few nice little touches, such as three ‘personas’ of instructional designers, and ‘A day in the life’, presenting a sample day’s activities. I note, though, that the 12-hour working day seems a bit overblown. 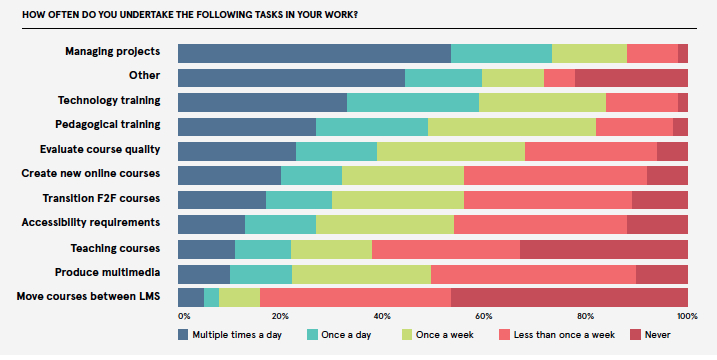 It’s not exactly clear how this list of tasks was developed, but a number of issues arise. First, the most frequently undertaken task is ‘Managing projects’. This is a very general term, and can mean different things to different people. For example, how might a meeting with a faculty member be classified? Is it part of project management, or technology training, or pedagogical training, or even all three?

It is also a bit of a worry that the second most frequently undertaken task is ‘Other’. This implies that the survey creators have not been able to identify a number of key tasks. And is ‘Move courses between LMS’ really necessary?

The ‘Calls to action’ page contains a number of unremarkable recommendations, more of interest being the ‘Areas for further inquiry’, listing some key questions (e.g. What strategies have instructional designers found effective in helping generate faculty buy-in and trust?), the answers to which might aid progress of the profession.

Which brings me back to where I started, the mention of my PhD thesis (‘Chaos Rules: An exploration of the work of instructional designers’). Of course such research is a very different animal to an online survey, but might add to the ongoing discussion of the role of the instructional designer. As part of the abstract explains,

This thesis provides an examination of the work of instructional designers in distance education, through the conceptual lens of chaos theory. Chaos theory was chosen as an analytical tool because of its ability to reveal the patterns and processes of complex systems as they move between order and turbulence. Recent work in the social sciences, specifically literary theory, has provided impetus for applications of chaos theory to educational settings.

Specifically, chaos theory is used to analyse eight case studies of projects volunteered by instructional designers working in five institutions in Hong Kong and Australia. Data were gathered over a period of months with each participant, chiefly through interviews, but also involving diary accounts, electronic mail and letters. The methodology was thus qualitative, specifically informed by Eisner’s vision of the ‘critical connoisseur’. Eisner equates an ‘enlightened eye’ with attainment of the skills of a critical connoisseur. First, an effective qualitative researcher must develop connoisseurship, the art of appreciation. On its own, though, connoisseurship is not enough; it is a private act, and thus needs a public face or presence. Criticism is this link, criticism being the art of disclosure. The critical connoisseur aims to help others to increase perception and deepen understanding of an educational situation or event.

It’s now a bit old (completed in 1995), but I did (finally!) publish a modified section of it much more recently (Murphy, D. (2011) ‘”Chaos rules” revisited’. International Review of Research in Open and Distance Learning, 12, 7, pp. 116-134.). I guess the point I’m trying rather laboriously to make is that the report authors could have consulted the literature better while formulating the survey – there is no evidence in the report nor the Appendix of any such search, nor a list of references.

So, apart from these minor grumbles, the report is well worth a look.