Editathon  I’m not too fussed that I didn’t know this word. It’s a new(ish) one, dreamed up just a few years ago to identify “an event where people develop open knowledge around a specific topic”. I chanced upon it when browsing the site for OER16, the 7th Open Educational Resources Conference, Open Culture, held on the 19th-20th April 2016 at the University of Edinburgh. One of the presentations outlined the journey of a group of 50 people who jointly created pages in Wikipedia by means of said ‘editathon’. 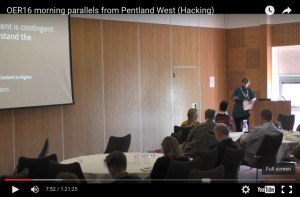 The session, ‘Learning to Develop Open Knowledge‘, was one of many at the conference that were streamed live, then made available for later viewing. Take a look if you’re interested, though you may end up as frustrated as I was: in an effort to include both the speaker and the screen, only about half the screen is visible. Surely the camera could have been better placed! And to continue my whinge, the bad placement was exacerbated by the overly bright light coming from the window next to the speaker. All this grand technology, but getting the basics wrong.

Apart from this, if you’ve at least a passing interest in OER, you should visit the conference site and browse the programme for the nuggets. For something solid and sensible, take a look at (yes, it’s also on streaming video) ‘Enriching a culture of openness: 10 years of OpenLearn at The Open University‘. Incidentally, if you choose to watch the video, nothing happens until the 24 minute mark – no, I didn’t wait that long, you can of course move the cursor along to that point. Another price to pay for automated lecture capture. And yes, this one manages to capture the speaker but not the screen (just a tantalising glimpse of the corner). On a more positive note, though, I totally agree with the overall summation of the OpenLearn experience, which is that

the success of OpenLearn at The Open University has been the fostering of a philosophy that openness in education is not an add on or extra to education but is an integral part of education and that the question is one of how openness most appropriately manifests itself within all the strategies and operations of the organisation.

But perhaps to provide you with the biggest jolt, you should watch ‘The Plight of OER‘. I can’t do it justice in summary, so go ahead … 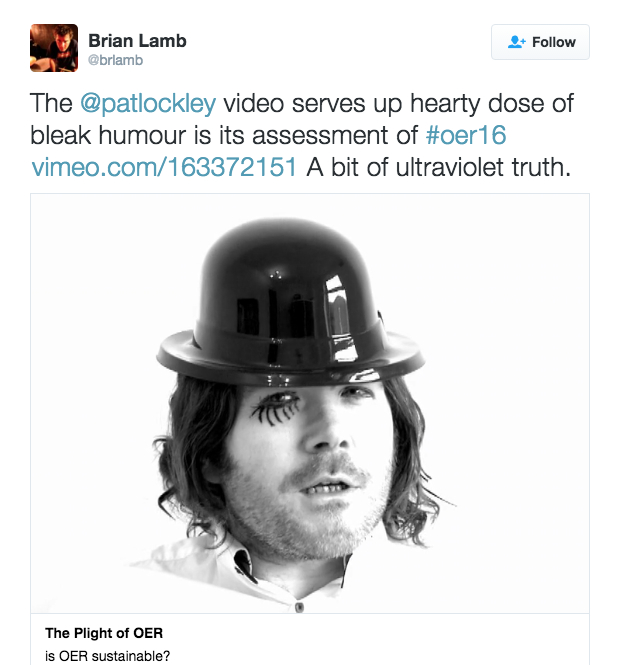