The famous name of Bugatti has in recent years been revived by the re-emergence of the marque as a manufacturer of fast and innovative cars. But do current aficionados realise just how famous the name Bugatti was in its heyday, and just how prominent it was in Grand Prix racing?

Bugatti was the Ferrari of the 1920s and ’30s. It built beautiful and technically innovative cars, both in terms of body shapes and engines. It gathered a team of leading racing drivers into its Grand Prix team and, yes, at least one of them was a woman.

Her name was Hélène Delangle, but she became better known as Hellé Nice, the name she took on in her early career as a dancer.

I learned about this extraordinary woman some years ago when a book caught my eye; The Bugatti Queen: In Search of a Motor Racing Legend. It’s a wonderfully entrancing book, written with great verve by Miranda Seymour. Even if you’re not interested in motor racing, you’ll find it a revelatory joy to read.

Yes, she reached the top echelons of motor racing, in a time when racing cars were hellishly difficult to drive, requiring both strength and technical precision. Hellé Nice had both in spades, as her Wikipedia page explains:

Although she did not win a Grand Prix race, she was a legitimate competitor, and frequently finished ahead of some of the top male drivers. Over the next several years, as the only female on the Grand Prix circuit, Nice continued to race Bugattis and Alfa Romeos against the greatest drivers of the day.

So the question naturally arises: if this was possible eight decades ago, why aren’t there any women in F1 racing? I don’t have the answer and, disappointingly, if you put this question into Google, the first link is to David Coulthard’s book on ‘My Life with Fast Karts, Fast Women and F1’. Further search did turn up a more relevant article taking Stirling Moss to task for his comments on women in motor racing: ‘It’s Time Moss Checked the Facts …‘. A glaring error appears in the piece, however. It claims that the first female grand prix driver was Maria Teresa De Filippis in 1958. Clearly the writer hadn’t heard of Hellé Nice! 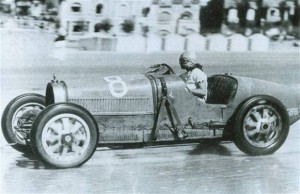 Hellé Nice loved speed. She had been a downhill ski racer before an accident made that dangerous sport impossible. So she took up an even more dangerous pursuit, motor racing. And it wasn’t just the Grands Prix: she set a world speed record, and raced in hillclimbs, the famous Monte Carlo rally, on the cinder tracks of the US, and in numerous endurance events (just in case you’re wondering if she had the required stamina). In one such race, she and a team of other women set records for high speed endurance racing that stand to this day. 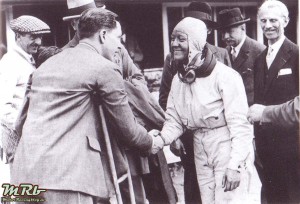 Being congratulated by Jean Bugatti

It is also disappointing that the name of Hellé Nice does not appear (as far as I can tell) in the Bugatti official website. All the more so as Elisabeth Junek (an accomplished predecessor at Bugatti who retired when she saw her husband killed while racing at the Nürburgring) is included in the profiles of Bugatti drivers.

It would be nice to know that she lived out a good and satisfying life, but alas no. After enduring an horrific crash in the Sau Paulo Grand Prix in 1936 (she was second when her car struck a haybale that had fallen onto the track – five persons were killed and others injured), she returned to racing, up until the Second World War. Regrettably, after the war she was accused (probably falsely – her biographer found no evidence) by a fellow racing driver, Louis Chiron, of Nazi collaboration and her reputation suffered irrecoverably. She died in poverty in 1984.

Hellé Nice is recognised in a few publications concerning women in motor racing, and in recent years there has been an effort to raise money for a marker for her grave. The information is dated 2013 with no update nor confirmation that the effort has been successful.

As Miranda Seymour wrote at the end of her marvellous book:

My wish, above all, is that her extraordinary life should not be forgotten. A heroine who rose from obscurity, and who now lies in an unmarked grave, deserves to be honoured and recalled as she was once described, as a champion of the world.

And the question stands: why are there no women in F1 racing?